Schizophrenia (SZ) is a severe chronic mental disorder characterized by a range of symptoms, potentially including delusions, confused thinking, and hallucinations. One of the best-known symptoms is auditory verbal hallucination (AVH), also known as “hearing voices”, which is experienced by ~70% of patients with SZ at some point.

Over the past few decades, many neuroimaging studies of SZ have furnished evidence of brain dysconnectivity due to abnormal functional connectivity based on temporal correlations, i.e., improper synchronization of cerebral activity between neuronal areas. Some investigations have demonstrated that AVH may be caused by abnormalities in the functional connectivity (FC) of auditory cortex pathways. 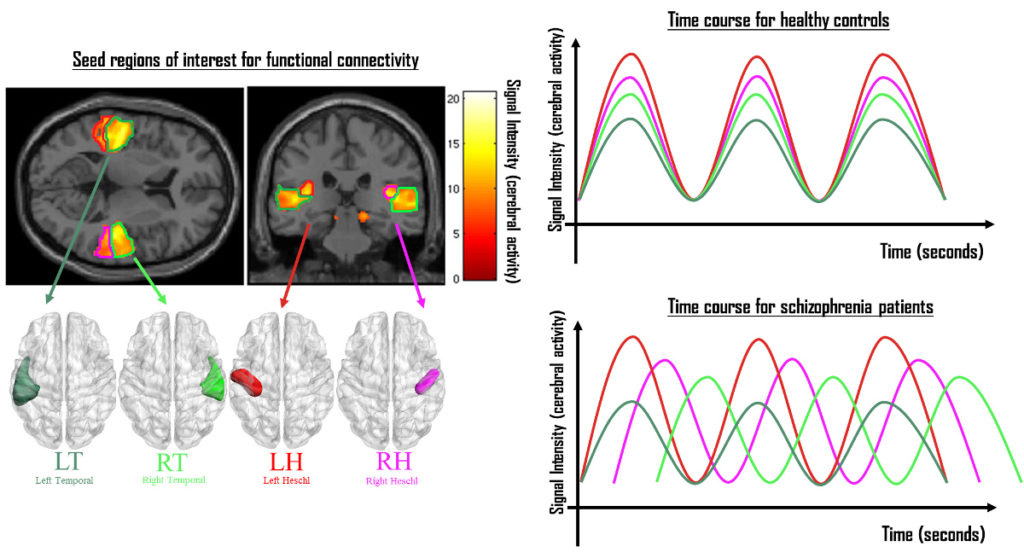 Fig. 1. Functional connectivity within the auditory cortex. The left panel shows functional MRI images of the brain activity elicited by the speech listening paradigm (upper images), and the four seed regions of interest analyzed for functional connectivity (lower images). The right panel shows the signal intensity of the cerebral activity of the four seed regions, with each color representing the average time course extracted for each participant in each region. Synchrony is shown for the healthy controls (upper plot), and asynchrony for the patients with schizophrenia (lower plot). In this study, we examined whether treatment with TMS normalized the abnormal functional connectivity in schizophrenia patients with auditory verbal hallucinations.

Transcranial magnetic stimulation (TMS) has been suggested as a potential means of treating AVH in schizophrenia. TMS involves the application of magnetic pulses upon the brain, and is reportedly effective for AVH treatment, especially when applied to the left posterior superior temporal sulcus. However, there are currently no known cerebral markers corresponding to AVH improvement. In the present study, we aimed to evaluate the rTMS-induced change of FC to identify a putative brain signature for the clinical efﬁcacy of rTMS for AVH treatment.

A total of 11 patients with SZ were evaluated using the Auditory Hallucinations Rating Scale, which assesses the main features of the voices. The patients then received a series of high-frequency magnetic pulses (20 Hz) in two sessions per day for two days. Magnetic resonance imaging (MRI) was used to target the pulses at a specific functional brain area in the left temporal lobe, which is associated with auditory processes and elicited by a speech listening paradigm in functional MRI. At baseline and at two weeks after rTMS treatment, we evaluated the FC between four seed regions of interest within the auditory cortex: the left and right Heschl gyri (LH and RH) and the left and right temporal (LT and RT) (Fig. 1).

Before rTMS treatment (baseline), the patients showed reduced FC within the auditory cortex compared to healthy controls. This reduced functional connectivity observed at baseline could be secondary to altered white matter integrity in the auditory transcallosal pathways that connect the left and right auditory cortical regions. After rTMS, the patients exhibited significantly decreased AVH without detectable changes in functional connectivity.

Our present results indicate that FC is not an optimal brain marker of rTMS-induced improvement of AVH. Further research is warranted to identify an appropriate brain signature for evaluating the clinical efficacy of rTMS.