For many years, the primary method of global drug discovery has involved the synthesis of naturally occurring molecules and their derivatives. This drug discovery process would involve several steps, from initial extraction and isolation from a biological host, the molecule would then have to be characterised before undergoing biological screening. If promising biological properties were discovered, organic chemists would then face the task of synthesising the molecule in a target orientated synthesis (TOS). A TOS will usually require multiple linear steps before the desired structure can be accessed. 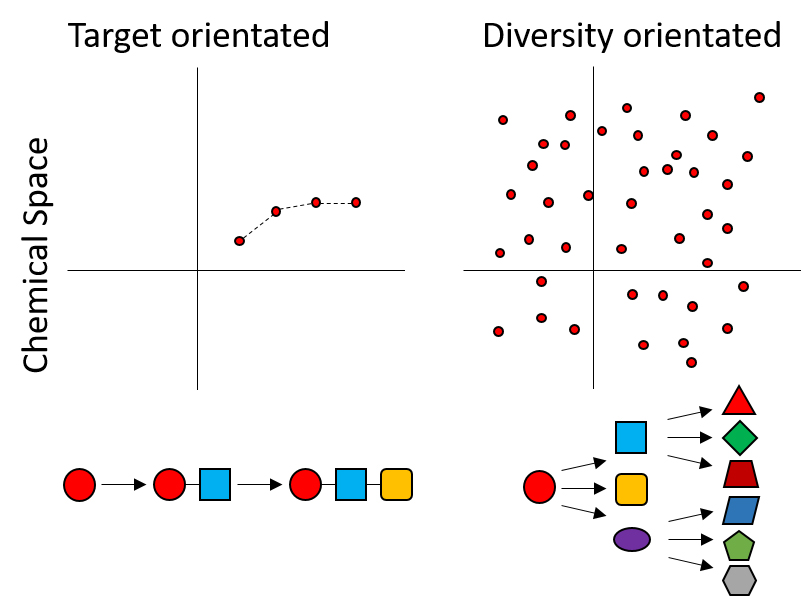 This has been a very successful method of drug discovery giving rise to many effective drugs, although over the past 15 years there has been increasing interest within the scientific community in an alternative drug discovery process, this is called diversity orientated synthesis (DOS). An ideal DOS project would start with a simple chemical entity and within a small number of divergent transformations arrive at a library of structurally varied small molecules that fill as much chemical space as possible. When a sufficiently large library has been synthesised, it is screened against a number of biological targets to assess potential activity.

An important aspect of DOS projects includes recognising areas of chemical space that not currently well represented in chemical literature. We identified that due to the difficulty associated with the formation of 8-membered rings (disfavoured energetic and kinetic factors), the number of short and robust synthetic routes was alarmingly low. This has meant that 8-membered rings have been under-represented in libraries put forward for biological screening.

We were able to invent novel methodology that enabled the synthesis of a wide range of ortho-fused cycloocta‑2,5‑dien‑1‑one cores in a one-pot synthesis using only simple starting materials and commercially available reagents. This multi-component reaction allowed the realisation of several chemical transformations in only one laboratory preparation. In an age where it is becoming increasingly important to reduce waste and improve efficiency, the ability to reduce the number of laboratory preparations is paramount. Each additional procedure requires the use of solvents, heating/cooling equipment, purification materials and researcher time. 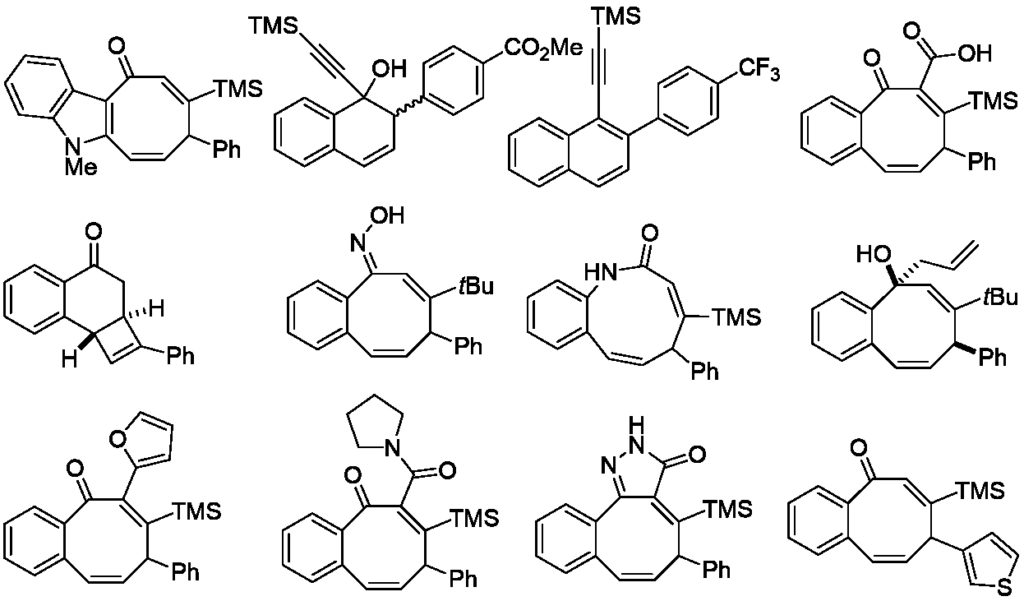 With the aim of developing a diverse library of small molecules, we investigated ways in which we could expand on our new methodology and add molecular diversity and complexity in only a few chemical transformations. Initially, we expanded our one-pot reaction to trap a reactive cationic intermediate with a suitable electrophile. During a subsequent study using our newly available ring systems, in a maximum of two steps synthesised a library including: four-, five-, six-, eight- and nine-membered ring systems; nitrogen, sulfur and oxygen containing heteroaromatics; bicyclic and tricyclic fused-ring systems; and functional groups including a carboxylic acid, amides, lactams, alcohols, ketones, halogens, nitriles, esters, oximes, alkenes, alkynes, enones and a pyrazalone ring. In order to access such a varied amount of chemical space we carried out: ring-contractions, ring-expansions, oxime formations, carbonyl reductions and stereoselective Grignard additions.

In line with our overall objective of assessing the biological activity of our synthesised library, many of the above compounds have been subjected to biological screening assays with promising results.