Mason bees lose their ways after drinking the pesticide Clothianidin

Pesticides are widely used in modern agriculture to protect field crops, but are suspected to harm pollinating insects. In December 2013, the European Commission imposed a moratorium of using three neonicotinoid insecticides (imidacloprid, clothianidin and thiamethoxam) for two years because of accumulative data from laboratory sub-lethal tests proving that honey bees and bumble bees are harmed at the colony and individual level. 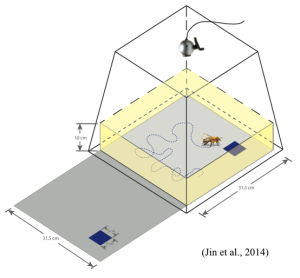 We developed a laboratory test procedure to study the effect of these neonicotinoids (Clothianidin) on navigation of a solitary species, the mason bee Osmia cornuta. We applied very low sub-lethal doses (0.76 ng/bee) that are known to be taken up by bees visiting treated flowers. Wild bees as the mason bee are endangered by many factors of modern agriculture. Navigation of a pollinating insect can be studied in the nutshell by exposing the walking bee to an arena environment where she learns to find a feeding place. The arena is essentially a box (about 30cm x 30cm x 30cm) with simple colorful patterns on its inner walls (the panorama) and a blue patch on the ground, the local cue with the food (honey water). To prevent the escape of bees, we cut their right wings and sprayed Teflon on the lower part of the inner walls making it too slippery for climbing up. An illumination system was symmetrically arranged on the ceiling of the arena. A webcam recorded the behavior of single bees. Cues other than visuals ones were excluded in our experiments. After 4 days’ training, mason bees remembered the feeding place very well, because they chose the blue local cue also after we removed the food. This preference was not seen in naïve bees that never received any training. Next we fed Clothianidin-honey water to another group of bees who also had been trained for 4 days. These bees failed to find the feeding place. In order to better understand the reasons for this failure, we first compared the walking characteristics of the two groups of bees, the untreated and treated bees, but did not find any difference. Then we analyzed the searching time of untreated and treated bees before they were trained and discovered that the treated group spent longer time outside the arena area in which the blue local cue was placed. Thus clothianidin treatment altered the evaluation of visual landmarks in navigation. Furthermore we found that trained treated bees spent much less time with the local cue than trained untreated bees, indicating a compromised retrieval of the navigational memory. What’s more, we now have a fast and easy test system to study the effects of pesticides in solitary bees.