Call children who pass batch 1 tasks but fail batch 2 tasks “(+-) children”. Show a (+-) child a normal eraser and an eraser that looks like a die. Put the normal eraser in box 1 and the die/eraser in box 2. Puppet Heinz looks in the boxes. Ask, “Does Heinz know the die is an eraser?”. (+-) children say “No”; this is a batch 1 task. Ask where Heinz will go to get an eraser; she will choose at random. She doesn’t understand that since Heinz doesn’t know that the die is an eraser, he won’t go to box 2. This is a batch 2 task.

Empty the boxes. Show the child a rattling ball. Put it in box 1. Introduce Susi, show her the ball, and that it is in box 1. Don’t show her that it is a rattle. Hide it in your hands, remove it from box 1, shake it, and say, “I’m moving a rattle over to box 2”. Ask the child, “Where will Suzi look for the rattle?”; (+-) children answer correctly (batch 1). Here (+-) children understand that since Suzi doesn’t know that the ball is a rattle, she thinks the ball stayed in box 1. 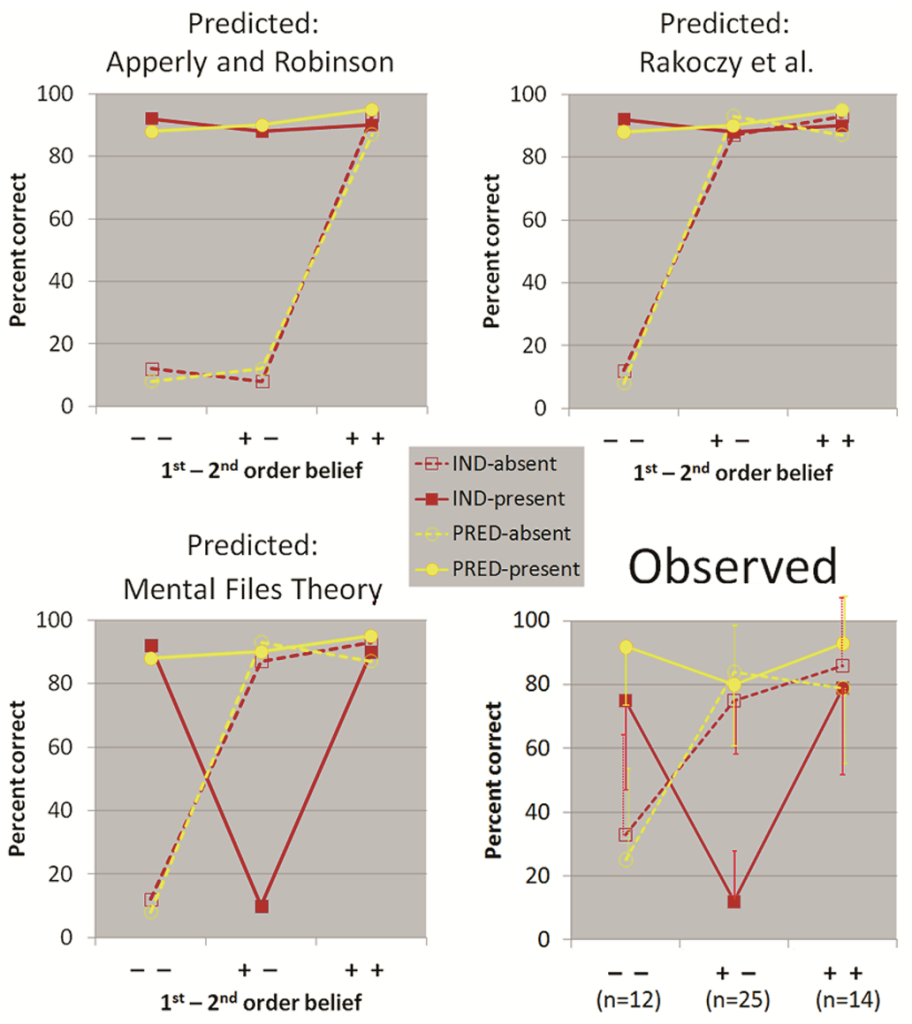 Everyone has a database of mental files that organize information. Ideally, each file collects information about exactly one object (Fig. 1A). But sometimes we have multiple files for a single object: when we don’t know that Cicero is Tully, we have separate files for each of them. On learning that Cicero is Tully we cross-reference those files. Call these cross-references “horizontal links”; they allow free information transfer between files (Fig. 1B).

To represent another person’s beliefs, we build a database for them to collect “vicarious files”. We cross-reference their files to ours, so that we can tell what they know about the objects in our own files. These “vertical links” allow restricted information transfer.

Good database management requires correct file duplication. When Heinz looks in box 2, adults duplicate their die-file to a vicarious die-file, but the horizontally linked eraser-file is not duplicated. We must also correctly copy horizontal links between files: Suzi needs vicarious files for a ball and for a rattle, since she has seen a ball and a rattle. They are not horizontally linked, since Suzi does not know they are the same thing.

Mental files and belief: A cognitive theory of how children represent belief and its intensionality.
Perner J, Huemer M, Leahy B
Cognition. 2015 Dec