Menthol is a monocyclic terpene alcohol that exists in plants of the Mentha genus. It is commonly known as mint. Menthol is a significant flavoring additive in tobacco products. Menthol-labeled cigarettes account for approximately one-quarter of the total tobacco market. As a matter of fact, almost all commercial tobacco products, even though nonmenthol-labeled, contain a certain amount of menthol. Clinical observations have shown a significant impact of menthol on perpetuation of tobacco epidemic, with an increase in experimentation and regular smoking and a decrease in smoking cessation success, particularly in youths and African Americans. However, it is not yet clear whether menthol directly enhances the rewarding actions of nicotine and thus facilitates nicotine dependence. This study employed a rat model of nicotine administration to reveal an enhancing effect of menthol on nicotine reinforcement. 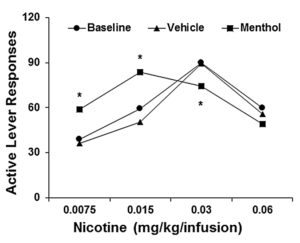 Fig. 1. Effect of menthol on the nicotine dose-response curve that supported operant self-administration behavior. Five minute prior to the test sessions, the rats in the different nicotine dose groups received an intraperitoneal injection of 5 mg/kg menthol. During the sessions, the rats responded on the active lever for nicotine self-administration on an FR5 schedule of reinforcement. For the sake of clarity, the mean number of responses on the active lever are shown without presentation of the standard error of mean. *p < 0.05, significant difference from vehicle treatment.

Male Sprague-Dawley rats were trained in daily 1-h sessions to press a lever for intravenously self-administering nicotine under a fixed-ratio 5 schedule of reinforcement. Separate groups of rats self-administered nicotine at four different doses (7.5, 15, 30, and 60 µg/kg/infusion). An inverted “U” shaped nicotine dose-response curve was obtained, which is showed as the baseline condition in the figure. After stable levels of nicotine self-administration response were established, the test sessions were performed. Five minutes prior to the test sessions, menthol at 5 mg/kg was administered intraperitoneally. The purpose of intraperitoneal route of menthol administration was to eliminate the involvement of menthol’s topical sensory effects, which allowed the examination of a direct action of menthol on nicotine reinforcement. As shown in the figure, menthol pretreatment shifted the nicotine dose-response curve to the left, indicating an enhancing effect of menthol on nicotine reinforcement. In a different set of rats that self-administered 0.015 mg/kg/infusion nicotine, a dose on the ascending limb of the dose-response curve, the dose response function of menthol (0, 0.1, 1, 2.5, 5 mg/kg) was determined. The facilitating effect of menthol on the self-administration of 0.015 mg/kg/infusion nicotine was dose-dependent with doses at or higher than 2.5 mg/kg producing its enhancing effect, whereas, doses at or lower than 1 mg/kg being ineffective. Interestingly, menthol at doses above the threshold of 2.5 mg/kg showed a similar magnitude of its effects. Moreover, using a progressive-ratio schedule of reinforcement that measures strength of reinforce nicotine and rat motivation for nicotine reward, pretreatment with 2.5 mg/kg menthol significantly increased the maximum number of lever responses that rats willingly made to procure the intravenous nicotine injections. In addition, in the rats that were trained to self-administer food pellets, menthol pretreatment slightly suppressed lever-press responses for pellet self-administration.

In summary, these findings demonstrate that menthol at or above 2.5 mg/kg produces a specific facilitating effect on the self-administration of nicotine at doses on the ascending limb of its dose-response curve. Together with the date obtained from the progressive-ratio test, it is suggested that menthol directly strengthens the rewarding effects of nicotine and thereby promotes nicotine consumption. This study provides an empirical evidence for a significant contribution of menthol to nicotine intake and tobacco addiction.