Migration led to the microevolution of Chinese short fat-tailed Sheep

Thus, most modern Chinese sheep breeds have a relationship to Mongolian sheep. Small-tailed Han sheep, Duolang sheep, Hu sheep, Tan sheep and others are all Mongolian sheep subspecies (Fig. 1). However, from the Mongolian plateau to various ecoregions around almost the entire country, Mongolian sheep have experienced changes in climate, environment and feeding conditions (from pastoral areas to rural areas) and been subjected to artificial selection in different directions. All of these factors have the potential to drive changes in selection and thereby cause microevolution. The subspecies of Mongolian sheep show significant differences in a number of traits, especially related to reproduction. Mongolian sheep exhibits seasonal estrous and singleton breeding, whereas Small-tailed Han sheep, Hu sheep and Duolang sheep exhibit year-round estrous and prolificacy in breeding. However, how species differ genetically in relation to these traits is not well understood. What different selection signals did these species get exactly during the migration? What kind of genetic diversities did these selection signals caused to the various species? How did the complex or tiny genetic mutation lead to the trait variations? Chinese short fat-tailed sheep are an excellent model for genetic studies on phenotypic evolution and adaptations to various ecoregions. 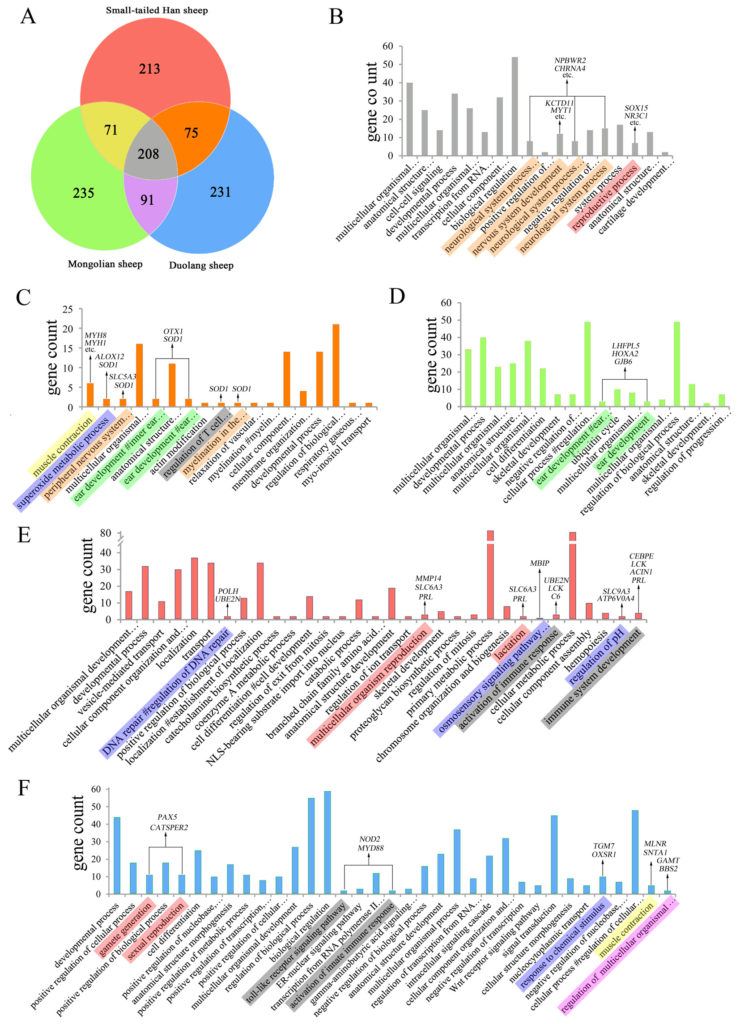 In this study we performed pooled whole-genome resequencing of 3 sheep breeds (Mongolian sheep, Small-tailed Han sheep and Duolang sheep) distributed over a wide range of geographical distance to examine the genetic variation among them. A 43.2-fold coverage of the reference genome, with a 14.4 X average sequencing depth for each breed was achieved. This effort identified 17,420,695 putative SNPs and 2,912,131 indels for the three breeds. We were able to experimentally validate 100 out of 102 tested SNPs. Selective sweep analysis revealed 143 genomic regions with reduced pooled heterozygosity or increased genetic distance to each other breed that represent likely targets for selection during the migration. These regions harbor genes related to developmental processes, cellular processes, multicellular organismal processes, biological regulation, metabolic processes, reproduction, localization, growth and various components of the stress responses (Fig. 2). Furthermore, we examined the haplotype diversity of 3 genomic regions involved in reproduction and found significant differences in TSHR and PRL gene regions among 8 sheep breeds. The substantial genomic resources provided here are useful for identifying genetic variations for phenotypic diversity and for revealing different signatures of selection associated with adaptation to various ecoregions.