The majority of protein-coding genes in nuclear genomes are interrupted by spliceosomal introns or, less often, by inteins. These intervening sequences are spliced at the RNA or protein level, respectively, so that intact proteins become reconstituted. In mitochondria, group II introns are a common presence in plants. On the other hand, no introns or inteins are known to disrupt mitochondrial genes in animals with bilateral symmetry. Rarely, genes can be fragmented in some lineages into separate genes that translate into complementary proteins. In mitochondria, this genuine “genes-in-pieces” structural arrangement has been known for cox1, cox2, nad1, nad2 and rps3 in some unicellular organisms and for ccmF and rpl2 in land plants. 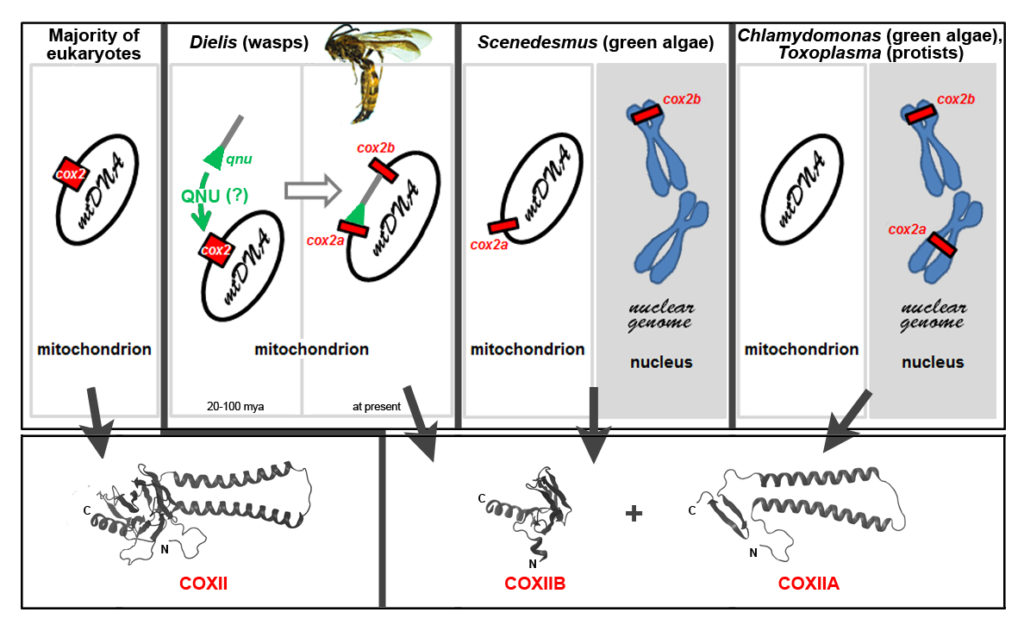 Fig. 1. Cox2 fragmentation into complementary genes through phylogeny. The structure of split COXII is exemplified by COXIIA and COXIIB of Dielis.

Genuine gene fragmentation creates additional opportunities for regulation of the activity of heteromultimeric complexes of a fragmented protein compared to the intact protein. Interestingly, the fission of a mitochondrial gene may also increase the probability of its relocation to the nucleus. Mitochondria have retained a relict mtDNA with the majority of their original gene set transferred to the host nucleus or lost so that most of their proteins are imported. Gene transfer to the nucleus is no longer believed to occur in animals, but it continues to some extent in protists and plants. Although both intact and split genes can be transferred, shorter proteins are easier to fold properly upon being imported into the mitochondria. Moreover, since higher hydrophobicity can limit functional protein import, gene fission into the regions that encode either hydrophobic or hydrophilic domains may be expected to increase the probability of nuclear transfer especially for the latter. In support of this prediction, in all but one described cases of split cox1 and cox2, at least the hydrophilic domain-coding-derived gene has been relocated to the nucleus.

Intriguingly, we recently identified the first in animals split mitochondrial gene that translates into two-piece protein. We found that the cox2 gene of the scoliid wasps Dielis (Campsomerinae) was split into cox2a and cox2b by the insertion of a transposon-like element coding for a putative nuclease QNU that may have been involved in the gene splitting event (Fig. 1). The insertion divided COXII into hydrophobic COXIIA and hydrophilic COXIIB that likely assemble into functional heterodimer. Preliminary analyses of Dielis subcellular proteomes revealed that  cox2b may have been copied to the nuclear genome and is translated in addition to the mitochondria also in the cytosol but as a chimeric protein. This protein may represent an early stage of the acquisition by cytosolic COXIIB of regulatory or mitochondrion targeting sequences or the product of a novel gene.

Another feature that seems unusual about cox2 fragmentation in Dielis is the continuing presence of the gene-splitting element in mtDNA, even though this insert accounts for as much as 20% of the mitogenome. Bilaterian animal mitogenomes are very compact and feature relatively constant content especially of protein-coding genes. One possible explanation for the retention of cox2-splitting insert is that the QNU nuclease or other protein or regulatory RNA encoded by the inserted element is involved in the processing of cox2 polycistronic transcript. Some of those macromolecules may also contribute to COXII assembly or the regulation of oxidative phosphorylation by other means.

In summary, the cox2 fission in Dielis points at unexpected plasticity of the organization of bilaterian animal mtDNA, which was once considered to be evolutionarily frozen. This plasticity is further highlighted by the continuing presence in the Dielis mitogenome of cox2-splitting element carrying novel genes, some of which are possibly involved in the expression and functioning of split cox2 and its product.