Mold is meat: Microbes are trophically equivalent to animals in the food-chain

The biological world can be divided into two vast “empires:” 1) organisms that make their own food (i.e., autotrophs, such as plants, algae, phytoplankton), and 2) those that must eat other organisms to live (i.e., heterotrophs, such as animals, fungi, zooplankton, protozoa, and most bacteria). The heterotrophs are, by far, the more biodiverse group. Surprisingly little is known about the richness of functional roles played by organisms in this group. Our work seeks to better explain the types of functional diversity observed within the heterotroph empire. Here, we have posed the question, Are microbes functionally any different from animals within a food-chain?

Fig. 1. In tropical forests, leaf-cutter ants are widely known as harvesters of leaf material, but the ants do not actually eat any of the leaf tissue. They bring the leaf material into their nest and incorporate it into a “fungus-garden.” This garden is a massive fungus that eats lots of leaves, and in return, produces fruiting bodies that are collected and fed to the ant larvae. Thus, the entire ant colony is supported by the flesh of a single fungus. Photo courtesy Don Parsons.

We have reported the first evidence that microbes are the trophic equivalents of animals. This means that when a microbe such as a yeast cell, a mold, or a bacterium develops on a food source, the microbe registers the same trophic position that an animal would, had the animal eaten the same meal. In more colorful terms, we show that mold is indeed “meat”—microbes are equivalent to, and thus interchangeable with, animals in the food-chain.
To prove this, we fed plant- and animal-based diets to a broad diversity of fungal, bacterial, and animal consumers. Then, using amino acid isotopic analysis, we measured their trophic positions. All consumers registered at the expected trophic positions, regardless of their phylogenetic origin, or whether the food was plant- or animal-based. This finding allows microbes to be integrated with the plants and animals of a food-chain.

To provide evidence of the ecological portability of our method, we investigated the ancient symbioses represented by Neotropical “fungus-gardens,” revealing four discrete trophic levels, competition, and mutualism among the ants, fungi, and bacteria occupying this community. Leaf-cutter ants have long been known to be prodigious harvesters of leaf material and have been referred to as the dominant herbivores of the Neotropics (Fig. 1). Until now, the trophic roles within the fungus-garden community had not been clearly articulated. Using stable isotope analysis, we have demonstrated that the fungus cultivated by the ants is actually the sole herbivore of the system—no different from a cow in a pasture. The ants feed on this fungus (their “livestock”), which means that the ants are, functionally, carnivores. Further, the fungus, not the ants, is the dominant herbivore of the Neotropics. 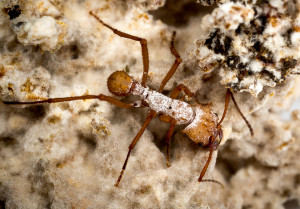 The ants maintain a symbiosis with a bacterium that helps protect their fungal “livestock” from invading microbes/predators (Fig. 2). In exchange for protection, the bacteria must be fed, and extract their food from the ants, themselves. Thus, the relationship is a “food-for-protection” pact, in which the bacteria defend the fungus-garden in exchange for food. Viewing the whole community from the viewpoint of the fungus, this large organism has very successfully commandeered the services of the ant colony and its attendant bacteria. The ants are not unlike an army of pets, dutifully feeding the fungus while also enduring parasitic bacteria that the fungus requires as protection. In exchange, the fungus produces fruit to feed its army of servants. In this 4-level food-chain, one might ask who has cultivated whom?

More broadly, our findings will allow researchers to measure and interpret the trophic roles of microorganisms, right alongside animals. Given that microorganisms are the dominant heterotrophs in all major global ecosystems, their functional niches matter to the countless species feeding on them directly or indirectly. With this new framework that our work provides, we open the door for more comprehensive functional diversity studies. In an era of profound biodiversity loss, such work is critical.