The process by which early life factors influence offspring health in adulthood is defined as ‘fetal programming’ and is considered a key mechanism for the establishment of chronic diseases in the offspring adulthood.

Given the obesity pandemic, studies suggested that obesity and metabolic syndrome in adulthood may be influenced by the initial period of life, primarily through inadequate nutrition available to the fetus and newborn.

When maternal nutrients do not supply the fetal needs for cell multiplication and organ formation, there is an impairment of the fetal growth and health. Conversely, the availability of maternal substrate that exceeds fetal requirements can also lead to deviations in physiological patterns of growth and thus confer the evolution of diseases throughout life. 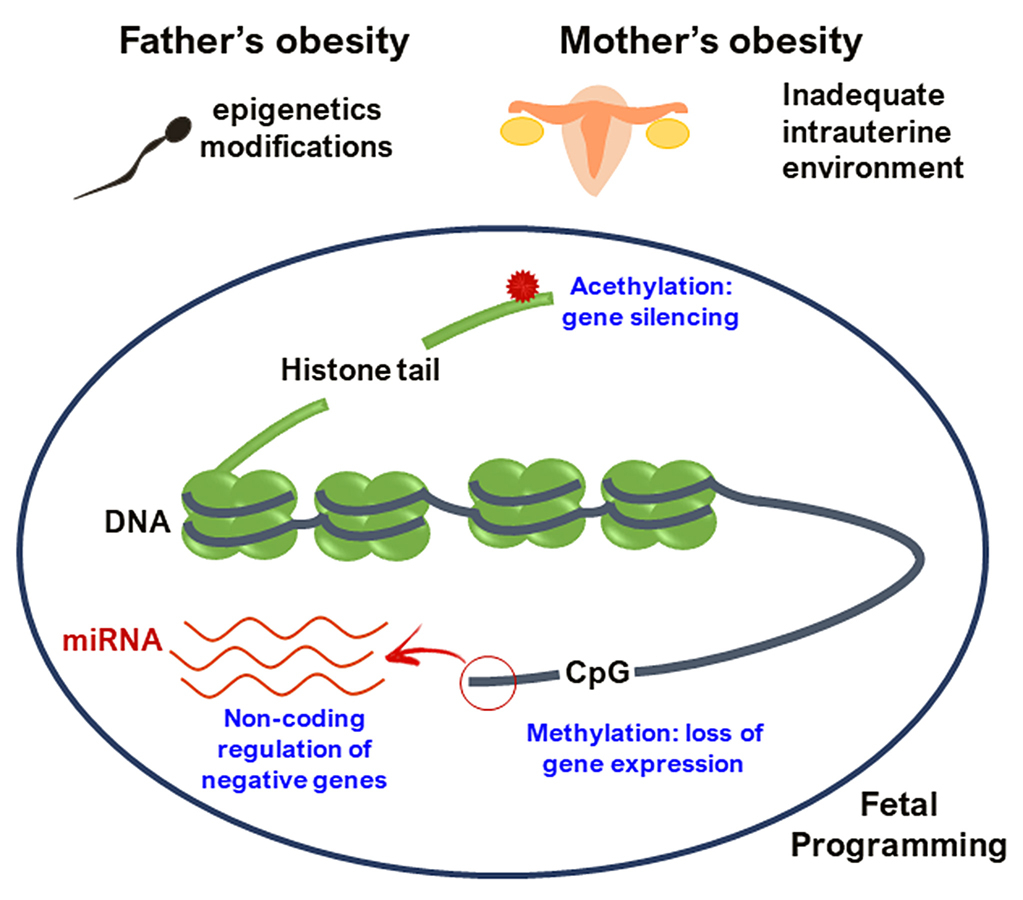 Fig. 1. Father’s obesity may result in epigenetic changes in spermatozoa. Several father epigenetic mechanisms may program the offspring, such as the hypermethylation of CpGs islands, gene silencing, and histone acetylation. Besides DNA methylation and the histone modiﬁcation, sperm RNA may also be an epigenetic regulator, since spermatozoa contain an array of both mRNAs and noncoding RNAs, including miRNA, and most of this RNA is delivered to the oocyte. However, the role of miRNA in early preimplantation embryos is still under debate. Mother’s obesity may be the consequence of several intrauterine changes leading to systemic inflammation, insulin resistance, and hyperglycemia and potentially led to the fetal programming of obesity and chronic diseases in adult life.

Different models are used to understand the mechanisms associated with fetal programming, in which the hormonal and metabolic environment during the prenatal or postnatal period is altered through changes in maternal nutritional status.

Although maternal insult is widely accepted, the consensus that obese father modulates sex hormones, molecular composition and sperm function starts to be increasingly evident. Thereby, epidemiology demonstrated that obese fathers are more likely to have obese children. The mechanisms that explain how the father’s health impacts the descendant are still under debate, but the epigenetics is being considered a key for phenotypic transmission, currently defined as the changes in the function of genes without alterations in the base sequence of deoxyribonucleic acid (DNA). The regulation is directed by three main events, named cytosine methylation, histone modifications, and non-coding RNAs.

Methylation refers to the addition of a methyl group at the 5-position of the cytosine ring, that is catalyzed by DNA methyltransferases, forming 5-methylcytosine. This event usually appears in regions called cytosine-phosphate-guanine islands (CpG), and about 55% of these islands are in the promoter regions of approximately 40% of mammalian genes. Therefore, hypermethylation of promoter regions rich in dinucleotides plays a significant role in the loss of gene expression.

The amino-terminal tails of histones are subject to at least eight types of modifications, including the commonly studied acetylation. The histone acetylase enzyme adds an acetyl group to the histone residues, and acetylated histones are believed to have a reduced affinity for DNA, being related to gene silencing by leaving the chromatin in a relaxed and transcriptionally active state. In contrast, deacetylation of histone lysine residues, catalyzed by several different classes of histone deacetylases, is associated with gene silencing.

Recent studies indicated the existence and importance of another mechanism of epigenetic regulation of ribonucleic acid-mediated (RNA) function, that is not translated into protein, the micro-RNAs (miRNAs), recognized as significant regulators of genes encoding proteins in the human genome. They are small non-coding RNAs that function primarily as regulators of harmful genes at the post-transcription level. The miRNAs may induce cleavage of messenger RNA (mRNA) when complementation is perfect or translation repression when complementarity is imperfect.

In general, all components of the cellular epigenome are strongly and interdependently connected. Epigenetic modification is a continual process, and some changes may be reversible.

As presented, the mother is not the only one to affect the health of the following generations; the father shares this responsibility by providing sperm-specific epigenetic stamp to the oocyte. Thus, the father’s nutrition affects the embryo developmental trajectory and health of adult offspring.