Ovarian cancer is an insidious disease which in the majority of cases is diagnosed only at a very late stage. The majority of ovarian tumours are of a particular aggressive type, called high grade serous ovarian cancer. Ovarian cancer is mostly treated with surgery, to remove the bulk of the disease followed by chemotherapy such as carboplatin (platinum compounds), to eliminate microscopic tumour cells that remain. Chemotherapy is usually effective in the first round; however, there are some patients who do not respond or respond poorly to first round chemotherapy. Furthermore, many patients eventually relapse with a tumour that is resistant to platinum chemotherapy. 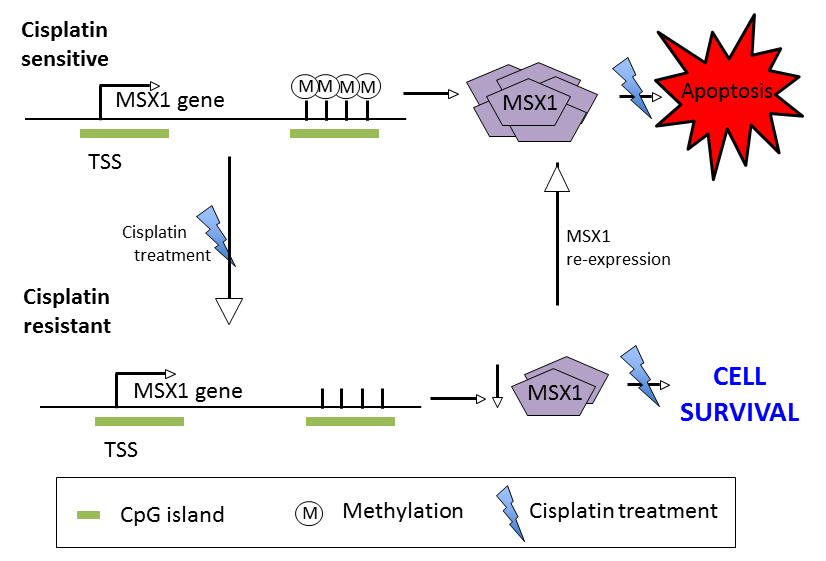 We have analysed ovarian tumours from patients with ovarian cancer and have shown, in a recent publication (Bonito et al., 2016), that tumours from patients with poor response and poor prognosis following treatment, have specific epigenetic changes in a gene called MSX1. Epigenetic changes are alterations in the structure of a gene not involving a change in the DNA sequence. One such epigenetic change is DNA methylation.  The drug resistant tumours from patients who respond poorly to chemotherapy have a decrease in DNA methylation at the MSX1 gene that leads to a decrease in the production of MSX1. This in turn affects the ability of chemotherapy to induce tumour cell death. MSX1 is present in the nucleus of cells and it controls the expression of other genes affecting the levels of specific proteins. We have shown that if we increase expression of MSX1 in platinum resistant cancer cells then these cells become more sensitive to platinum, perhaps through activating other genes and proteins involved in cell death pathways.

Programmed cell death, also called apoptosis, is a mechanism whereby damaged cells are removed from a tissue. Ovarian cancer cells can become resistant to chemotherapy by decreasing apoptosis. Indeed, almost all high-grade serous ovarian cancer have a protein called p53 inactivated. P53 is commonly called the guardian of the cell because it is involved in recognising damage in a cell and activating apoptosis. When we reintroduce MSX1 into platinum resistant ovarian cancer cells, even those with mutated/inactive p53 increase levels of apoptosis and become more sensitive to platinum.

These findings give us further clues into how chemotherapy resistance may develop in ovarian cancer and may provide future therapeutic targets for this disease.