Mutations in the SHOX2 gene contribute to irregular heartbeats

Heart rhythm disorders contribute significantly to cardiovascular morbidity and mortality and represent a major health issue. Developing approaches towards disease prediction and treatment of cardiac arrhythmias is therefore an important topic in healthy aging. Atrial fibrillation (AFib) is the most common cardiac rhythm disturbance affecting 1-2% of the general population. Disorganized electrical signals cause the two upper heart chambers to fibrillate, which results in irregular, chaotic and often rapid heartbeats. Although environmental factors play a role in the pathogenesis of AFib, a strong genetic component prevails.

Shox2 is a transcription factor controlling distinct functions during embryonic development by switching its target genes on or off. Previously, we have demonstrated a key role for Shox2 in early cardiac formation by controlling the development and function of the primary cardiac pacemaker (sinoatrial node) in mouse and zebrafish animal models.

In this study, we report that SHOX2 also plays a role in pacemaker dysfunction in human individuals. We performed a genetic screen to identify DNA changes in the SHOX2 gene in patients with early-onset AFib before the age of 60 years. Thereby we identified DNA changes located outside and inside the protein-coding region of the SHOX2 gene (Fig. 1), which were predicted to be disease causing. 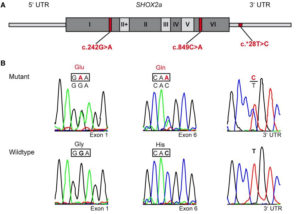 To decipher the underlying mechanism how these mutations may contribute to AFib, we performed functional analyses in cell culture, animal models and patient material. These studies revealed that one of the coding variants, which affects a highly conserved amino acid (p.H283Q) severely impairs the biological function of the SHOX2 protein. In vitro reporter gene analyses revealed that the transactivational activity of SHOX2 on known target genes (Bmp4 and Islet1) is significantly affected by the underlying mutation compared to wild type. Additionally, in vivo data in zebrafish demonstrated that the mutant Shox2 in contrast to the wild type is not able to rescue a bradycardia (slow heart rate) phenotype, which was induced by knockdown of the endogeneous Shox2 gene. These data indicate that the identified mutation leads to a loss of regular Shox2 function and thereby impairs cardiac pacemaker activity in vivo.

The identified non-coding variant resides in the 3’ untranslated region (3’UTR) of the SHOX2 gene, which contains regulatory elements that post-transcriptionally influence the gene expression. Interestingly, this variant primarily occurred in a distinct subgroup of AFib patients with alterations in an electrocardiographic parameter (prolonged PR interval), reflecting prolonged atrial conduction. In silico analyses revealed that the underlying variant generates a novel binding site for a microRNA (miR92b-5p), which may lead to degradation and/or translational inhibition of its target mRNA. Our in vitro data in cell culture confirmed that miR92b-5p is able to bind to the mutated SHOX2 3’UTR but not to the wild type sequence, indicating that this microRNA may influence the expression of SHOX2 in patients carrying the respective mutation. This hypothesis is strengthened by the fact that circulating miR92b-5p plasma levels were significantly altered in AFib patients with the 3’UTR variant. Finally, we could demonstrate reduced SHOX2 expression in right atrial appendages of AFib patients compared to controls.

Developing a mechanistic classification of AFib based on health modifiers like genetic susceptibility is essential to improve personalized prevention and management of this disease. Thus, our findings may contribute to a better classification of AFib, since a particular patient cohort with early-onset of the disease and distinct electrocardiographic parameters share a genetic predisposition involving the SHOX2 gene.