A generalized approach to aging is possible based on the General System theory of aging, predicated on the General Model of aging. The fundamental cause of aging is the law of entropy increment in incompletely open systems. The major general mechanisms are: stochastic death of non-renewed structures; incomplete excretion of intoxicants; reduction of organism function regulation, self-renewal especially. Age-related syndromes and local manifestations of aging are secondary. Here, we review the progression of aging as development of multiple syndromes analogous to various diseases, that may allow physicians for prevention and for ease of diagnosis and treatment of common aging-related dysfunctions. 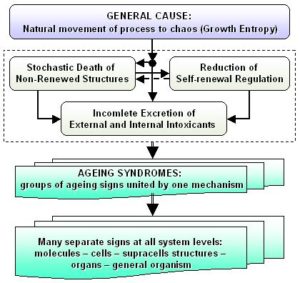 The modern scientific principles of system analysis make it possible to apply methods of phenomenological analysis at an abstract level, replacing the consideration of the material system structure with the consideration of the essential inter-relations between its structural parts. Thus, the study of the endless particular manifestations and mechanisms is replaced by the consideration of the general laws and principles. The necessary and sufficient definition of “aging” must involve the general phenomenon of reducing viability (increasing the probability of death) with aging. This process is fatally determined by a fundamental law of nature – the second law of thermodynamics for semi-open systems (the law of increase of entropy in natural processes), which includes the general organism, comprising stable (or semi-stable) structures and elements. In Figure 1 we can see a hierarchical flow chart of the development of the aging process in a bio-system: from a single cause via the major mechanisms to specific manifestations of aging. Whereas the total cause of aging is manifested through three major aging mechanisms, the specific signs of aging are grouped by general mechanisms into the groups – syndromes.

Our general system theory of aging allows us to specify 4 levels of generalization/detailing of the causes and mechanisms of aging:

1) the fundamental cause of aging (the law of increase of entropy in natural processes);

2) the major general mechanisms of aging:

– stochastic death of non-renewed structures of the body,

4) the particular manifestations of aging.

The impacts on the natural aging syndromes may be much more effective. The syndrome description principle is one of the fundamentals of medicine and it is studied in detail in pathophysiology, where typical pathological processes are indicated. The body responds to any external and internal impacts, producing changes in its internal structures and functions, which are not unlimited, but are determined by a well-defined and limited number of standard reactions – or syndromes. These syndromes and the therapeutic interventions into them are well studied in medicine. Many of the syndromes are characteristic of natural aging and the physicians are well familiar with them.

It is becoming increasingly clear that well-known medical syndromes, which can be diagnosed and treated by common medical means, play an important role in the development of the natural aging process. Syndromes typical for common diseases are developed in the course of natural aging, including: dystrophy, hypoxia and tissue sclerosis, toxicity, oxidative stress, immunodeficiency, maladjustment, etc. Moreover, aging is accompanied by typical pathological processes or their precursor states: pre-diabetes, atherosclerosis, angina, tissue ischemia, osteoporosis, etc., requiring prevention and correction. This syndrome approach to influencing the natural aging processes, using the available well-known medical agents that can affect these syndromes, provides the physicians with a practical tool to actually impact on aging and makes such an impact feasible and necessary from the scientific, practical and regulatory points of view.