The venom of the snakes contains a great diversity of molecules, which are toxic to animals, so that the symptomatologies developed in the victim’s body are related to multifactorial and synergistic actions of toxins, which are still poorly understood. When inoculated in the organism, this secretion can induce severe systemic damage as; coagulopathy, neuromuscular paralysis, acute kidney injury and others, and/or at the site of the bite, as pain, swelling, paresthesia, erythema, hyperemia, bleeding. The human immunity after challenge of the immune system for an ophidian accident is a very controversial issue, with no guarantees about the production of antibodies, much less about its efficacy. 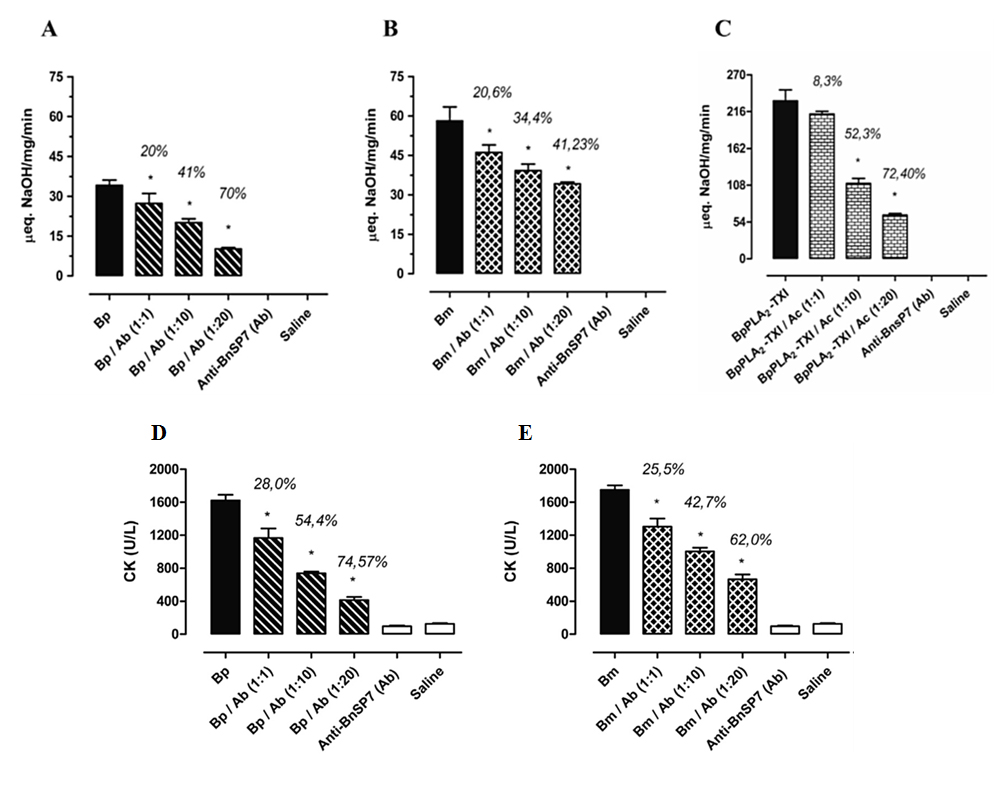 So, until today, the most effective means of minimizing the deleterious effects these venoms is the antivenom therapy, whose serum antibodies recognize specific proteins of the inoculated venom and promote the desired therapeutic effect. In the study of our work (Biologicals 2017; 50:109-116), Balb/c mice had their immune systems challenged with successive doses of enzyme phospholipase A2 (PLA2) named BnSP7 and included in the group of PLA2-Lys49. After the immunization, the animals were sacrificed, and the blood samples, obtained by cardiac puncture and in the absence of anticoagulant, were centrifuged. The serums obtained were filtered using a sterile syringe coupled to a filter of 0.45mm in porosity. This material was applied to an affinity Protein G Sepharose column in order to isolate polyclonal anti-BnSP7 and then used in the development this work. These antibodies were able to recognize different venoms assessed by ELISA. The result of cross-reactivity between anti-BnSP7 and five crude snake venoms: Bothrops pauloensis (Bp), Bothrops alternatus (Ba), Bothrops diporus (Bd), Bothrops moojeni (Bm) and Bothrops jararaca (Bj) was higher for Bp and Bm – up to 1:6400 and up to 1:3200 dilutions, respectively – indicating that these venoms contain phospholipases A2 homologous to BnSP7. For the snake venoms of Bd, Bj and Ba, the anti-BnSP7 antibodies showed a lower recognition (up to 1:800) and absence of reactivity, for the other dilutions. SDS-PAGE was performed and revealed that those five crudes snake venoms have broad profile of proteins with diverse mass, among them PLA2, as compared to the molecular weight standard. After analysis by Western Blotting, anti-BnSP7 recognized proteins of low molecular weight containing approximately 14kDa from venoms of Bp and Bm, probably corresponding to phospholipases A2. The sequence alignment of amino acids of the primary structure of PLA2-BnSP7 with different Lys49 and Asp49 PLA2’s types described in the scientific literature and isolated from Bp and Bm venoms, was identified by the protein data bank BLAST (PubMed-Medline) using Clustal 2.0.11 software. These others toxins showed high identity with BnSP7-PLA2, especially in the C-terminal region, which is responsible for toxicity of these enzymes. It was clear that the Bp and Bm venoms are rich sources of PLA2 enzymes, since they showed potent specific phospholipasic activity. In the neutralization assays, anti-BnSP7 antibodies were able to neutralize significantly the PLA2 activity induced by Bp, Bm crude venoms or BpPLA2-TXI toxin (PLA2-Asp49), when those polyclonal antibodies were incubated at 1:10 and 1:20 ratios (venoms or toxin/antibodies, w/w). Neutralization assays of myotoxic effects were also performed. The measurement of creatine kinase levels in association with muscle damages brought by Bp and Bm venoms, was also reduced significantly, dose dependent manner, by anti-BnSP7 at all tested ratios (1:1, 1:10, 1:20). Studies like this aim to propose resolutions in the current immunotherapy of snakebites, so as to build models of antibodies candidates for inclusion in antiophidic serum, increasing the efficiency of these sera in the reduction or elimination of local effects induced by the venom.