Research converting carbon oxide (CO2) into low-molecular-weight organic compounds is extremely important because this research can not only reduce the concentration of CO2 in the atmosphere but can also convert CO2 into useful organic compounds.

And, no report in which a large amount of organic compounds has been generated by reducing CO2 with inexpensive catalyst in air under irradiation of solar light at room temperature and atmospheric pressure is founded. 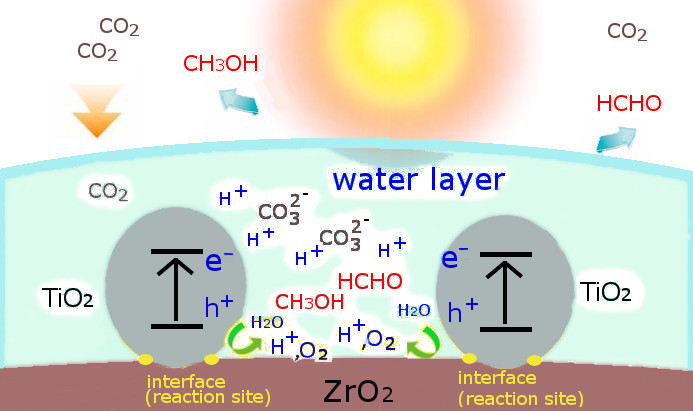 Features of the method are following.

First, Suitable weight ratio of TiO2/ZrO2 composite is 6/4-5/5, that is, ZrO2 as additive component is used in large amounts.

Second, formation of thin water layer over composite is performed via condensation of water vapor in air.

Third, reactant is not CO2 but CO32- ion that CO2 in air dissolved and dissociated in the thin water layer.

When CO32- is used as reactant, as the standard electrode potentials (E0) of reducing reactions are positive, thus, the standard Gibbs energy transitions are negative, so, the reactions proceed spontaneously.

As surface area of the thin water layer is very large, the volatilization is very active, thus, accelerate chain reaction composed of generation of CO32- ions, reducing reactions in the thin water layer, volatilization of the reduced products and keeping the reducing reaction in equilibrium.(For further explanation about the chain reaction, see discussion section in report published.)

Sixth, electrons generated by photo-catalyst effort of TiO2 move to the interface, and, accelerate the reducing reaction because of high energy (high reducing force), that is, this method is catalytic reaction enhanced by the TiO2 photo-catalyst.

The fact that a large amount of reduced products was obtained from CO2 and H2O in air under irradiation of only real solar light at room temperature and atmosphere pressure is a novel and important finding.

Converting of CO2 into low-molecular-weight organic compounds with the TiO2/ZrO2 composites under solar irradiation.
Moriya I
Sci Rep. 2017 Oct 31