Cancer is a major cause of death and more than 1 million people in the United States are diagnosed with cancer each year. Finding more effective methods to treat cancer remains a challenge, and researchers are working with great zeal to find new cancer cures in order to save human lives. Radiation, surgery, and chemotherapy are commonly employed cancer treatments; however, these types of treatments produce serious adverse health effects. To circumvent this problem, new strategies such as photodynamic therapy (PDT) are being developed for cancer therapy. 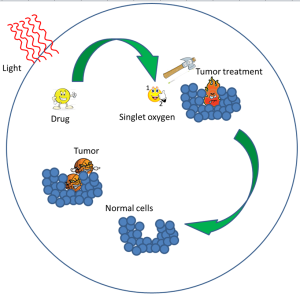 Graphic representation of the mechanism of photodynamic therapy

PDT is a widely used, clinically approved, non-invasive method for cancer treatment. This method does not require expensive instrumentation for application. There are three primary components required for PDT: a drug known as a photosensitizer, light, and molecular oxygen (which essentially exists in the living cell because we all breathe). Photodynamic therapy is a process in which a drug (dye or photosensitizer), upon absorption of visible light, produces highly toxic free radicals e.g., singlet oxygen. Singlet oxygen is the active form of oxygen that attacks cancer cells since the drug is present in cancer cells. When a drug is injected into the blood stream of a patient, it remains present in cancerous cells for longer periods of time, as compared to time in normal cells. One or two days after injection, a patient will be treated with a specific wavelength of light to generate toxic free radicals of oxygen, which are responsible for death of cancer cells. The specific drug used is one of the most critical components for destruction of tumor cells, and each drug absorbs a specific wavelength of light. Hence, a variety of drugs have been synthesized to treat tumors present in various parts of the human body. In this regard, the absorption wavelength of a drug is very important since it will reflect the depth of penetration of light into body tissue. Normally, longer wavelengths of light (> 560nm) are preferable for effective treatment of tumors.

In this study, novel compounds based on porphyrins (naturally occurring compounds) and phthalocyanine dyes were synthesized with desirable characteristics for treating tumors via photodynamic therapy. In the current study which has been published in Chemistry: A European Journal, we are able to prepare nanomaterials by using our newly synthesized compounds based on porphyrins and phthalocyanine. Nanomaterials are very small particles with a size range of 1-100 nm (smaller than human body cells which are about a micrometer size). Nanomaterials are beneficial because of their easy penetration into cancerous cells and enhancement of the drug surface area. These nanomaterials are very stable and possess a highly positive surface charge which is beneficial for transport across the negatively charged cell membrane. After injection of the dye, the system is irradiated with longer wavelengths of light (673 nm) in order to investigate ability to produce singlet oxygen. When designing these materials, we were most focused on the following characteristics:

Our drugs possess all of these above characteristics.