New insights into the cause of Prader-Willi syndrome, a rare obesity-related genetic disorder

Prader-Willi syndrome (PWS) is a complex genomic imprinting disorder caused by the loss of paternally expressed genes in the 15q11-q13 region usually due to a chromosome 15q11-q13 deletion seen in about 70 percent of those affected with this rare obesity-related syndrome. With the use of high resolution chromosomal microarray and methylation-specific multiplex-ligation probe amplification (MLPA) analyses of chromosome 15, we updated the clinical and genetic findings on our patient initially reported in 1996 during a 20 year follow up study. We further characterized the unusual microdeletion seen in this patient and recorded an atypical size of 209,819 DNA base pairs which included the SNURF-SNRPN gene/transcript which includes the imprinting center and non-coding snoRNAs SNORD109A, SNORD116 and IPW; all located in the 15q11-q13 chromosome region. We compared the clinical and cytogenetic results with four other similarly reported individuals ranging in age from 5 to 23 years identified in the literature with rare atypical submicroscopic deletions of varying sizes within this chromosome region but without a deletion of the PWS imprinting center. 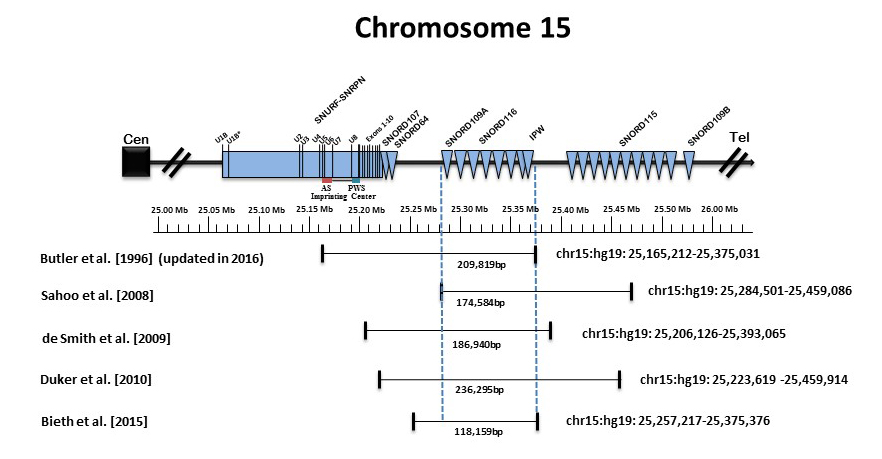 Fig. 1. View of the chromosome 15 region involved in Prader-Willi syndrome (PWS) shown to scale with physical distance represented in million DNA base pairs (Mb) in size. The rectangle displays the SNURF-SNRPN gene complex playing a role and upside down triangles depict non-coding snoRNA SNORDs and IPW gene transcripts. The reported deletions are shown at the bottom drawn to scale and cited references depicting genomic-deletion coordinates for genomic database build hg19. Minimal critical region spans the position from 25,280,000 to 25,375,000 DNA base pairs on chromosome 15 represented by the dotted lines encompassing SNORD109A, SNORD116 and IPW. The imprinting centers for Angelman syndrome (AS) shown in red and for PWS shown in blue that control the activity of genes in this region and depends on the parent of origin.

The imprinting center controls the activity of genes in the chromosome 15q11-q13 region. PWS and Angelman syndrome (AS), an entirely different clinical disorder, were the first examples in humans of genomic imprinting disorders with disturbed expression of genes in the 15q11-q13 region depending on the parent of origin. These disorders are under control of separate imprinting centers. Imprinted genes in the chromosome 15q11-q13 region found on the father’s chromosome 15 when disturbed (i.e., deletion or missing) leads to PWS while deletions of this chromosome region when inherited from the mother led to Angelman syndrome. To better characterize the specific genetic lesions causing PWS clinical findings, we analyzed rarely reported patients from the literature with these unusual small deletions.

Clinically, our patient met the diagnostic criteria of PWS including infantile hypotonia, a poor suck with feeding difficulties, global developmental delays and later food foraging, childhood obesity, small hands and skin picking. Small atypical deletions of comparable sizes are rarely seen in the literature involving the 15q11-q13 region and in all five cases the size ranged from 118,000 to 230,000 base pairs. The deletion of SNORD109A and SNORD116 was a common finding in those patients and supported by evidence in mice studies with similar genetic defects. The SNORD116 cluster functions in the hypothalamus and plays a role in the maturation of feeding circuits. Knockout of SNORD116 in mice displayed a hyperphagic phenotype and reduced postnatal growth potential, bone mass and size.

The patients with small microdeletions in the literature involving the minimal critical cytogenetic region have fewer problems with growth failure (stature and hands/feet size) and cognition than those with the larger typical chromosome 15q11-q13 deletion seen in the majority of patients with PWS. Similar behavioral/physical characteristics were found in these patients despite the small deletion involving the PWS imprinting center in only our patient, while the other four reported patients did not show a deletion of the imprinting center which controls the imprinted genes expressed only on the father’s chromosome 15 (Fig. 1). These results further support an overlapping critical deletion region involving the non-coding snoRNAs SNORD116, SNORD109A and IPW gene transcript in common and thereby perform key roles in pathogenesis or contributing to the PWS phenotype. More research is needed to gain a better understanding of the genetic causation and involved genes and transcripts (coding and non-coding) leading to this rare obesity-related genetic disorder.