New technology to make your electronic devices thinner and lighter

For photographers, the heavy and bulky photographic equipment to get high quality pictures may bother them a lot, especially when they want to go to open country. For doctors who need to go to an emergency situation may want a portable imaging system to diagnose illnesses, especially in a horrible traffic condition, such as in earthquakes. For smart phone users, they may want a thinner and lighter phone, but with better camera, as well as long battery time. All of these problems could be solved by developing ultra-thin flat lenses to replace the curved lenses in the electronic systems.
Lenses with a flat surface have at least two advantages over curved ones. Firstly, flat lens focuses light by nano scale surface structure, thus it can be made very thin, even thinner than the incident wavelength of light, while the curved lens focuses by propagating light in the dielectric for a distance. Secondly, flat lenses can remove the distortions during imaging. Typical ways to correct the distortions is utilising multi-lens systems, which are much more expensive and consume space. Thus it’s crucial to develop ultra-thin flat lenses, with which optical devices, such as camera, solar cell etc. could be made smaller and portable. It is a growing trend to developing thinner and lighter devices. 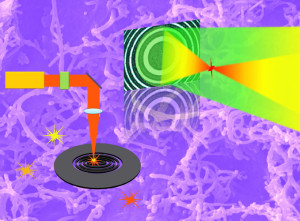 In our study, we reports a novel way to fabricate flat lens by laser direct writing method, which is fast, economical, and useful for industrial production. Direct writing techniques enable computer controlled 2D and 3D pattern formation in a serial fashion. Compared with conventional techniques like lithography, stamping, or other patterning approaches that require masks or pre-existing patterns, the laser direct writing process provides high flexibility for arbitrary patterning via non-contact and maskless fabrication process, which is much cheaper and convenient.
The fabrication process is illustrated in the left of the picture above, while the schematic of the lens (operating in reflection mode) is presented to the right. The lens we fabricated are Fresnel zone plate (FZP), which consists of a series of concentric rings alternating between transparent and opaque, which are the simplest form of flat lens. Now they are being widely used in solar cells to focus the light from the sun. Buckypaper, which looks like a piece of black paper, is composed by carbon nano tubes, as shown in the background of the picture. The efficiency of the FZP lens depends on the index contrast of neighbouring zones. As for the opaque zones, the lower the reflection is the better. As buckypaper have strong ability to absorb light, they are very nice material for developing FZP lens.
The buckypaper FZP lens was fabricated on silicon substrate with a radius of 2 mm. A large area FZP lens has great potential to be used in photovoltaic and imaging applications. The working of the FZP lens and its performance in the visible and terahertz regimes was studied computationally. Experimental measurements were also performed to characterize the lens in the visible regime and good agreements with the simulations were achieved.
The study is of interest as it demonstrates the novel laser processing of buckypaper for producing a flat lens, which has the potential to make the electronic devices thinner and lighter