New variants of porcine epidemic diarrhea virus with large deletions in the spike protein, identified in the United States

The Porcine Epidemic Diarrhea virus (PEDV) is an enveloped, positive-sense, single-stranded RNA virus that belongs to the genus Alphacoronavirus. This virus is known to only infect pigs and causes acute diarrhea, vomiting, and generally has a mortality rate of greater than 50% in neonatal pigs. In spring 2013, PEDV emerged in the United States after a long history in Asia and Europe. This emergence caused severe economic losses, estimated between $900 million to $1.8 billion, for the pork industry and left approximately 7 million piglets dead. Currently in the US there are two main types of porcine epidemic diarrhea virus circulating, the original US-PEDV (non-S INDEL) and S-INDEL (first detected in samples collected in January, 2014). 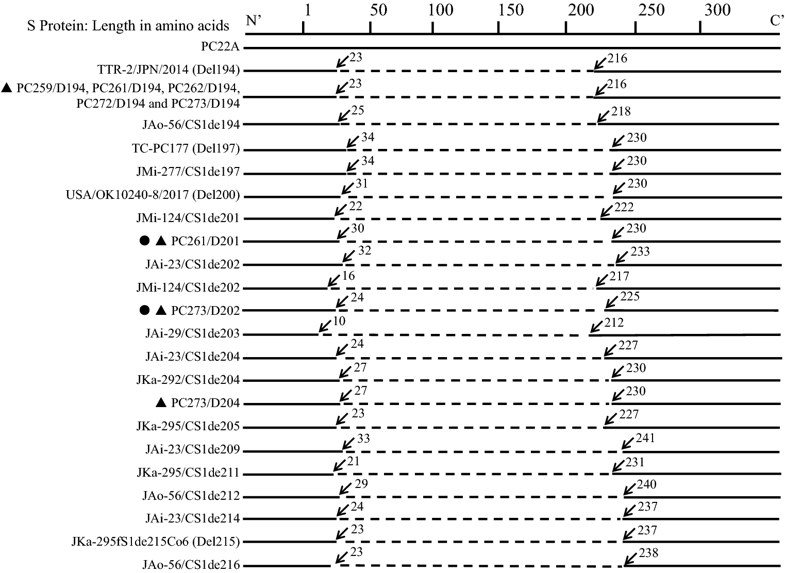 Since 2016, several PEDV variants containing large deletions in the structural spike protein, designated as S1 N-terminal domain-deletion ( S1 NTD-del) variants, have been found in clinical samples of US swine. The spike (S) protein in the PED virus is divided into two functional domains, S1 and S2, that are responsible for receptor binding and virus-cell membrane fusion. The NTD of S1 is reported to bind to sialic acid which is present in the mucosal lining in the gastrointestinal tract of swine. This binding allows for the virus to attach to the cell and is believed to be important in the pathogenicity of the virus. Mutagenesis studies have shown that deletion of the NTD does not decrease the induction of virus neutralizing antibodies but does reduce the virus’s ability to cause disease in neonatal piglets.

In this report, US-PEDV, S INDEL, and a unique variant virus were detected using RT-PCR from 29 clinical fecal and oral fluid samples. Four isolates were found to be very similar to previously reported and characterized variants of PEDV.  Two new S1 NTD-del variants were found; one containing a 202-amino acid-deletion and the second containing a 201-amino acid-deletion. It was also found that there was a coinfection of the original US-PEDV and S1 NTD-del PEDV variant strains in US piglets. This information goes to show that PEDV is continually changing and could potentially be responsible for disease pattern changes in the future.

Transmissible gastroenteritis virus (TGEV), a coronavirus closely related to PEDV, and its S1 NTD-del variant porcine respiratory coronavirus (PRCV)  present an interesting example of the importance of the S protein for swine alphacoronavirus pathogenicity. PRCV has an affinity for swine respiratory cells while TGEV targets porcine gastrointestinal cells. While TGEV produces significant diarrheal disease in pigs, PRCV produces a mild respiratory disease. The shared immunogenicity between the two viruses, combined with widespread prevalence of PRCV, has lessened the clinical impact of TGEV in many places. So, applying this theory, it could be said that PEDV could be evolving in such a way that TGEV did thus creating a natural variant resulting in immunity to the original highly virulent strain of PEDV. It is possible that the decreased incidence of large scale PEDV outbreaks and persistent infections is due to co-infection with S1 NTD-del PEDV variants that stimulate population immunity against virulent US PEDV.