Measurements in biomedicine are often difficult to perform because human subjects are involved. Many examples can be found, particularly in clinical procedures, where in vivo measurements are often not as accurate as desired, difficult, dangerous or even impossible to perform, especially if deep tissues or vital organs are in question. Moreover, non-invasive medical procedures are emerging in the search for more reliable, less expensive, and risk-free medical technology for the future.

Computer simulations provide safe and inexpensive insight into physiological processes. Computer simulations can be useful to estimate an immeasurable variable or a variable difficult to be measured (hidden system variable) based on other variables of the system/process whose measurement is more feasible (non-invasive variables) – a concept known as soft or virtual sensing. However, simulations are usually resource- and time-consuming, which is not acceptable in real-time systems. To this end, we use machine learning methods to construct a predictive model that will provide a prediction for the hidden variable in a much shorter time with satisfying accuracy. Namely, we use simulation to generate a substantial amount of diverse data for different input simulation parameters. The simulated data is then used to construct a predictive model.

We have applied the above approach on a real-world problem in the domain of biomedicine – non-invasive real-time prediction of inner knee temperature during cryotherapy after anterior cruciate ligament (ACL) reconstructive surgery of a knee. It is known, mostly from empirical evidence, that cryotherapy following reconstruction contributes to reduced tissue edema, inflammation, hematoma formation and pain, reducing the need for pain medication and enabling faster rehabilitation. The need for non-invasive prediction of inner knee temperature during therapeutic cooling is based on the finding that the cryotherapy should be controlled depending on the individual patient’s response, which raises the need for “smart” cooling devices for personalized therapy. 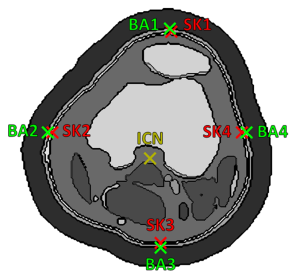 Fig. 2. Positions of inner and outer knee voxels whose temperatures are used in the training dataset. The positions are marked with crosses on knee model slice in the level of the intercondylar notch. ICN – intercondylar notch, SK – skin, BA – bandage (1 – anterior, 2 – medial, 3 – posterior, 4 – lateral).

A validated simulation model of the cooling treatment is used to generate the data for the predictive modeling tasks. The goal is to construct a predictive model that predicts the inner temperature variable based on other system variables whose measurement is more feasible, like skin temperatures. We first perform feature ranking – investigate which input variables are sufficient for making a good prediction and to which extent we need to measure them in time. Next, based on the feature ranking results, we investigate the predictive performance and time/memory efficiency of several predictive modeling methods – simple methods, such as linear regression and regression trees, as well as more complex methods, such as model trees, and ensembles of regression and model trees.