Biological processes involve interactionsof several macromolecules and characterization of such interactions is important for elucidating these processes. The major problem with such characterization is the transient nature of the complexes formed by the interacting molecules. Single molecule biophysics approaches such as Single Molecule Force Spectroscopy (SMFS) including optical tweezers and atomic force microscopy (AFM) are now widely used tools for detection of subtle interactions between biological molecules at the single molecule level. One of the major advantages of these methods is obtaining properties of individual molecules without ensemble averaging. Therefore, it has become possible to characterize transiently populated species that play important roles in various biological processes such as protein folding and self-assembly of biological machines. 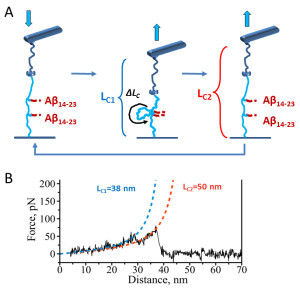 Fig. 1. A) Scheme showing the probing experiment using the Flexible NanoArray tether. Aβ14-23 peptides are immobilized inside the FNA at locations separated by ΔLC. During the approach stage peptide dimer is formed. Retraction of the AFM probe away from the surface results in the rupture of the peptide-peptide contact. B) Force-distance curve with “fingerprint” signature of specific ruptures. Difference between measured LC1 and LC2 is exactly the distance ΔLC separating Aβ14-23 peptides within the FNA tether.

In a typical AFM SMFS experiment, probing is performed by approaching the molecular probe immobilized on an AFM tip to a surface modified with target molecules in a “fishing” format. By pulling AFM tip away a specific rupture between probe-target molecules is measured providing valuable parameters of the disassembly process. The assembly step, however,cannot be characterized by this method. The approach described in this paper eliminates this problem and provides a relatively routine way for probing assembly and disassembly steps of the complex formation and dynamics.

The key in the developed approachis the use of flexible polymer tether, termed Flexible Nano Array (FNA). FNA contains interacting molecules that are covalently immobilized inside of this polymer tether. Importantly, for the FNA approach wedeveloped a novel type of polymer synthesized with the DNA synthetic chemistry using hexaethyleneglycolphosphoramidite monomers instead of nucleoside monomers. As a result, a polymer tether of desired and homogeneous length is obtained. Additionally, precise control over the FNA synthesis allows for introduction of the probe and the target molecules within FNA tether at well-defined locations.

We tested the applicability of this design by measuring interactions between aggregation-important amyloid beta peptides (Aβ14-23) inserted within theFNA polymer (Fig. 1. A). The design allowed us to identify the dimerization events in the force distance curves using a clear “fingerprint” signature originating from FNA (Fig. 1. B). By pulling on the FNA tether, the interactions between the two internally immobilized molecules are measured. Multiple approach-retraction cycles detect and measure pathways of both disassembly (during tip retract) and assembly (during tip approach) processes. Our results suggested heterogeneous population of dimers with 3 regions responsible for the initial association of the peptides. The combination of experimental data with computer simulations provided structural information on the structure of assembled Aβ14-23 dimers. With the use of FNA, molecules remain in close proximity to each other when they are immobilized within the FNA. This enables the same molecular complex to be continuously observedalleviating the risk of losing interacting partners. Therefore, the FNA approach will be useful for other single-molecule techniques in which complexes of two or more interacting molecules are probed.