Developing brain is highly susceptible to injury. Together, prematurity and hypoxic ischemic encephalopathy (HIE) account for 50% of global mortality and significant neurodevelopmental impairment in survivors. HIE is a clinically defined syndrome of disturbed neurologic function due to a lack of oxygen and diminished perfusion to the brain around the time of birth, in the absence of other causative factors. HIE injury occurs in three phases over days to weeks (Fig. 1). Understanding the injurious and protective factors involved in each phase allows for development of potential neuroprotective therapies. HIE occurs in 1.5 to 4 per 1,000 births in developed countries, and in as many as 26 per 1,000 live births in resource-limited settings. Without treatment, two thirds of affected infants die within the newborn period, or develop permanent neuropsychological handicaps, including intellectual disability, cerebral palsy, epilepsy, sensorineural hearing loss or vision loss. 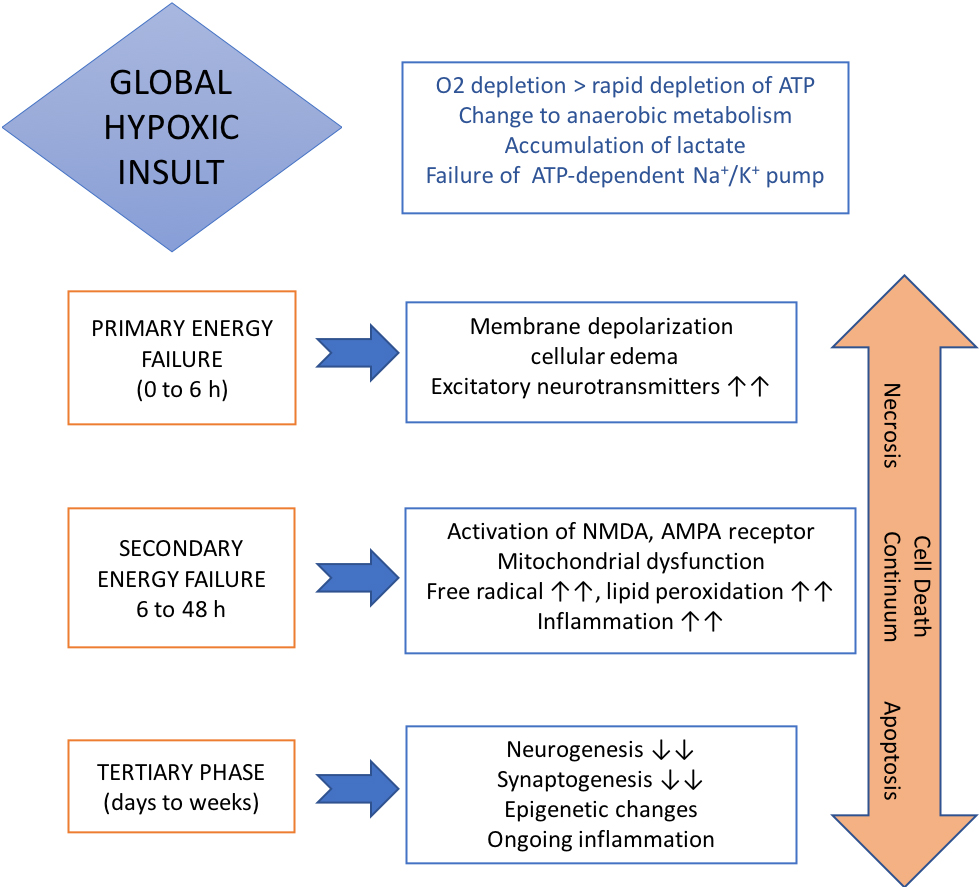 Therapeutic hypothermia (TH) is the current standard of care in high income countries. Multiple randomized clinical trials have shown that TH significantly reduces the combined outcome of death or severe neurodevelopmental impairment from 65% to 40-50%. While the benefits of TH provide proof of concept that outcomes can be improved, additional treatments to further improve outcomes are needed. Many promising pharmacological agents for neonatal neuroprotection are either in preclinical research or clinical trials (Fig. 2).

Clinical Trials of New Therapies
Erythropoietin (Epo) is a hormone required for red blood cell production and brain development. It acts by binding to cell surface Epo receptors, and in animal studies, reduces inflammation, cell death and has regenerative effects in brain. Epo is now in phase III clinical trials as prophylaxis for preterm brain injury, and as a neuroprotective treatment for term infants with HIE undergoing TH. Other potential neuroprotective agents in clinical trials include melatonin, Xenon, and allopurinol. Stem cell therapy has shown neuroprotection and improvement in functional outcomes in animal models of neonatal brain injury, but the optimal cell type and dose is still under investigation. Umbilical cord blood (UCB) is enriched with mesenchymal stem cells and is autologous to the patient making this appealing. Phase I and II studies have shown UCB to be safe.

Pharmacological Treatments in the preclinical stage of development
N-Acetyl-L-cysteine (NAC) is a potent antioxidant, and precursor of glutathione. It reduces inflammation and improves cell survival. Polyphenols are molecules present in fruits and herbs with anti-inflammatory, cell survival and regenerative properties. Curcumin is found in Turmeric (Indian spice), and Resveratrol in grapes and wine. Both have been shown to be neuroprotective in animal models of HIE. Nanomedicine has emerged as an important field for delivering drugs to specific targets. Nanoparticles, such as polymeric dendrimers, can bind drugs, target their uptake by specific cell types, and modulate drug delivery. This can increase bioavailability of drugs and decrease dose-dependent side effects.

Fig. 2. Targets of potential pharmacological drugs in treatment of HIE.

Ideal neuroprotective treatments should be safe, readily available, inexpensive and effective when given after an injury occurs. Many strong candidates like Epo, melatonin and stem cell therapies are in clinical trials to evaluate their efficacy in neonatal brain injury.