Of flies and men: investigating human disease in fruit flies

My lab studies diseases which affect the neurons connecting our brains to the muscles throughout our bodies, called motor neurons. In particular, we are interested in the hereditary spastic paraplegias (or HSPs for short), a group of motor neuron diseases caused by gene mutations. Individuals with HSP develop weakness in their legs leading to difficulties walking which is caused by degeneration of the very longest motor neurons. Extensive work in recent years has successfully identified many of the genetic causes underpinning HSP, but there are currently no treatments to prevent, cure or even to slow the course of these diseases. Therefore, we need to better understand what is going wrong within long motor neurons of individuals with HSP so that novel treatments might be developed. 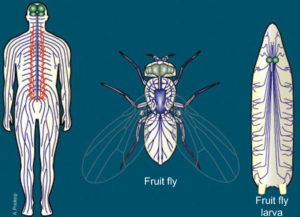 Fig. 1. Comparison of the nervous system in fruit flies and humans. The brain is shown in green and the motor neuron connections are shown in blue. Image reproduced with permission from Prof. Andreas Prokop, University of Manchester.

Like many scientists, we use model organisms that can reproduce, or model, key aspects of the human disease that we are investigating. We use the fruit fly, Drosophila melanogaster. While fruit flies may be a nuisance in your kitchen, in the lab they are really useful. For example, flies have a simple, well characterised nervous system which makes it easy to study motor neurons in healthy controls and genetic mutants to identify important differences (Fig. 1). We have recently carried out a study in which we have generated a new fly model of HSP to learn about the disruption that occurs within their motor neurons.

Two years ago, mutations in a gene called ARL6IP1 were found to cause some forms of HSP. We therefore began by making flies which don’t produce ARL6IP1. These flies initially appeared healthy but by studying them as they aged we found that they developed movement defects such that from 2 weeks of age (young adulthood for flies) they couldn’t climb as well as healthy controls. ARL6IP1 produces a protein which functions in the formation of a compartment within cells called the endoplasmic reticulum (ER). In healthy motor neurons the ER can be seen as a continuous ribbon-like structure that runs the entire length of the cell. In our model of HSP, we found that the ER was fragmented (Fig. 2, ER, arrowheads). This indicates that we have generated a good model of HSP in which we can investigate disruption within long motor neurons that may be contributing to disease.

The most exciting aspect of our study was recognising that degeneration of motor neurons in our HSP models is largely caused by defects in mitochondria. In particular, mitochondria are lost specifically from the ends of the longest motor neurons in our HSP model larvae, similar to the motor neurons that are affected in HSP patients (Fig. 2, mito). Mitochondria make the energy needed to power vital cell functions. Therefore, we hypothesise that long motor neurons degenerate in our models of HSP, and perhaps in HSP patients (?), in part because of reduced mitochondrial function. In fact, we found that when we restored mitochondria to the ends of long motor neurons, we could rescue the movement defect in our model of HSP so that they look like healthy controls! This is an important finding because it’s the clearest evidence to date that loss of ER proteins, like ARL6IP1, disrupt mitochondria within a living organism. 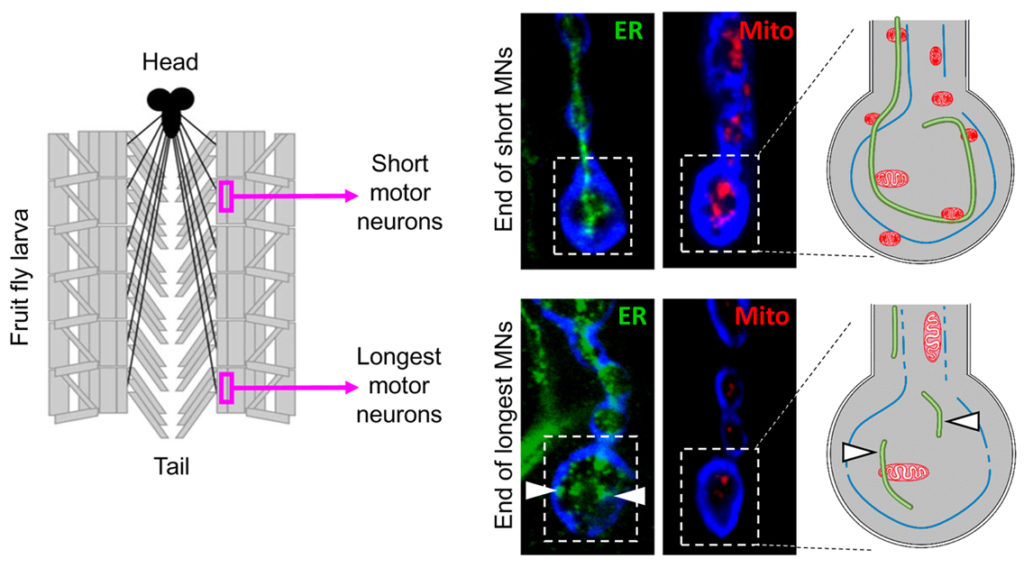 There is still lots of work required to investigate why only the longest motor neurons are affected and to try to understand how these findings from flies translate to HSP patients. However, our research has suggested a new cause for motor neuron degeneration in HSP which may be a useful target in the development of a therapy for these diseases.