Origin and fate of radionuclides in Swiss soils

Soils profiles from protected recharge fields used for drinking water production were drilled and analysed for radionuclides, such as radiocesium (137Cs), radiostrontium (90Sr) and plutonium (239+240Pu). Inventories and distribution of the radionuclides were compared with an uncultivated reference soil outside the recharge site. The goal of this study was to investigate the behaviour of radionuclides in an artificial recharge site that may receive rapid and additional input of radionuclides by contaminated river water (particularly when draining a catchment including nuclear power plants (NPP)). 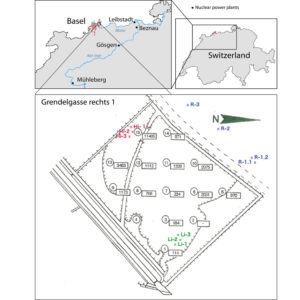 Fig. 1. Upper maps: Draining Catchment of the rivers Aar and Rhine with Basel and the Swiss NPPs of Beznau, Gösgen, Mühleberg and Leibstadt. Lower map: Recharge site Grendelgasse rechts 1. The infiltration rates given in the rectangular boxes are in liters/m2 day-1.

Soil inventories
Elevated inventories of the radionuclides were observed at the recharge site. The soil of the recharge field exhibited a threefold higher activity of 137Cs compared to the reference soil. Also for 239+240Pu higher inventories where observed (40%). 90Sr behaved differently, showing similar inventories between reference and recharge site. These elevated inventories resulted from inputs of contaminated river water over the last 60 years. We estimate that 75–89% of the total inventory of 137Cs in the soil at the recharge site (7.000 Bq/m2) originated from the fallout of the Chernobyl accident and from emissions of Swiss NPPs. This estimation is based on the actual activity ratio of 137Cs/239+240Pu of 22 for global fallout in the Northern hemisphere.

Distribution in soil profiles
The main activity of 137Cs was located in the top soil (4.5–7.5 cm) but reached down to a depth of 84 cm and 48 cm for the recharge and the reference site, respectively. The activities of 239+240Pu originate from the global fallout after 1950. It appeared to be strongly adsorbed onto soil particles. The shape of the depth profiles was similar to 137Cs, but also similar between the recharge and the reference site. 90Sr showed to be more mobile than other radionuclides. It was distributed uniformly over the entire soil profiles of the recharge and reference sites, indicating that 90Sr already had passed the soil and entered the gravel zone and the ground water. 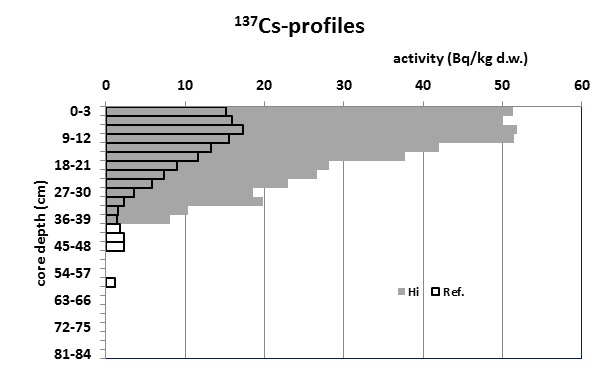 Fig. 2 Radioactivity profile (in grey) at the recharge site Hi compared with the reference site (bars with bold black borders).

In 1986, the fallout from the reactor fire at the Chernobyl NPP led to the highest deposition of radionuclides since 1962/63. The Federal Office of Public Health (BAG) estimates a total deposition of 26 kBq/m2 of 137Cs due to this release. The Institute for Applied Ecology (Freiburg, Germany) calculated the input of radioactivity in the Swiss river system after a hypothetical accident at a Swiss NPP, based on the core inventory of the power of block 2 of the NPP of Fukushima Dai-Ichi (2381 MW). They calculated a release of 1–2.1016 Bq of 131I, 4–6. 1015 Bq of 137Cs and 3–5.1015 Bq of 90Sr during 12 days. Such a release would lead to an exceedance of the Swiss drinking water standards for at least one month when infiltration of contaminated river water happens. Our investigations identified radiostrontium as a potential threat to the ground water.