Parasites hidden in feedstuff – pigs also have to watch what they eat! 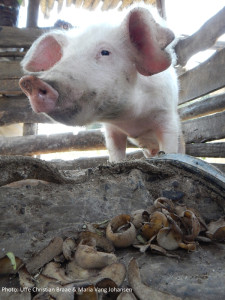 In many parts of the world, Sunday pork roast is not as delicious as it might sound. The tapeworm with the Latin name Taenia solium is a parasite that causes much suffering mainly in low-income countries where smallholder pig keeping is common. The adult tapeworm lives in the intestines of humans, causing a disease called taeniosis. The tapeworm produces millions of eggs so tiny that they are invisible to the naked eye. The eggs are excreted in the stool and into the environment. If a pig eats these eggs they develop into cysts in the muscles and brain of the pig, a disease called porcine cysticercosis. In low-income countries where inspection of pigs at slaughter is limited, there is a high risk of this infected pork ending up on someone’s plate. If not thoroughly cooked, ingesting pork containing these cysts will cause them to migrate down through the stomach to the intestines where usually one cyst will develop into an adult tapeworm, thus, completing the life cycle of the parasite. A horrific twist in the life cycle of this tapeworm is that if a person accidentally ingests the tapeworm eggs, often the case in areas with poor sanitation and hygiene, these eggs can migrate to the central nervous system of that person, where they develop into cysts, for example in the brain, leading to severe neurological complications such as epileptic seizures. This disease is call neurocysticercosis and can have fatal consequences for the host of the parasites. The complexities of the parasite life cycle, causing taeniosis, porcine cysticercosis, and neurocysticercosis, complicates the perception people have of how to avoid infection with the parasite. 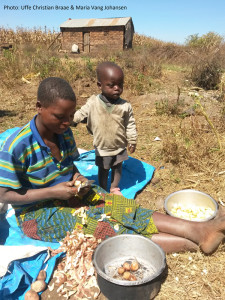 To date attempts to control the parasite in low-income countries have failed. Presumably due to the lack of understanding exactly where and when the parasite is being transmitted from humans to pigs. It is therefore important to find out what puts pigs a risk of contracting the parasites. Newly published research has shown in a case-control study that a link between feeding pigs potato peels and pigs having cysts (Fig. 1). This was found by comparing two groups of smallholder farmers in an endemic area of Tanzania, where one group did not have any cases of disease and the other group had persistent or recurring disease cases, to what type of feed was given to pigs. The next step will be to confirm whether the potatoes are contaminated with tapeworm eggs out on the pastures or when handled during peeling by a tapeworm carrier with poor hand hygiene (Fig. 2). The study also confirmed the importance of sanitation as it confirmed previous research showing that infection in pigs was linking to farmers having poor latrines that pigs could easily access. If pigs are given the chance they will consumed human stool.

The newly published research has brought valuable insight into the transmission pathways of the tapeworm T. solium. Consequently, it is suggested that when designing control programmes to combat the parasite, a much greater detailed assessment of pig management with focus on what pigs are fed, and how to improve management, is essential if such a programme is to have any success at all. Globally millions of people are suffering T. solium infections and action is needed now.