Pathological role of oxidative stress and related with schizophrenia in T. gondii infection

Toxoplasma gondii (T. gondii) is an obligate intracellular parasite that infects all warm-blooded animals, including humans. Oxidative stress (OS) occurs when there is an imbalance between pro-oxidant and antioxidant factors and is induced by reactive nitrogen species and highly reactive oxygen species (ROS). In many neurodegenerative disorders OS is one of the major reasons for neuropathology.

The aim of this study is to investigate the relationship of oxidative stress in a mice model of Toxoplasmic Encephalitis (TE) after 10 and 30 days post infection with neuropathology related to TE and to demonstrate whether there is a correlation between neuropathology seen in TE and OS. 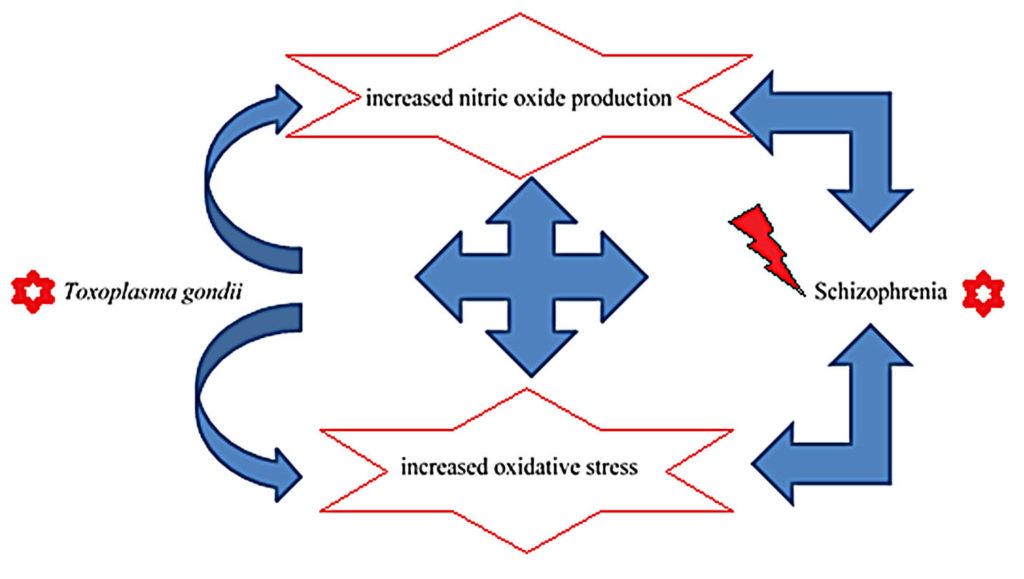 Nitric oxide (NO) plays a significant role both as pro-oxidant and antioxidant in mitochondrial ROS-related pathology. According to our previous reports, in the pathogenic process of TE, high levels of NO are produced and there is an imbalance of apoptosis regulation.  Hence the severely expressed NO is considered to be the first major source of OS. The relationship between OS and apoptosis of neuronal as well as other cells has been a long studied issue and OS is considered to be one of the most important factors that causes apoptosis. We observed that in this study OS might also induce both internal and external apoptotic pathways. Therefore, it is clear that NO at pathological levels and OS are important in the pathogenesis of this disease.

earlier studies made with the TE model. We believe that all these similarities cannot be a pure coincidence. Findings of this and previous studies are considered to be very similar to pathogenesis of schizophrenia, showing significantly lower levels of that superoxide dismutase activity, severe OS and increased NO productions. Considering all, it is a strong hypothesis that T. gondii may cause schizophrenia by inducing OS and NO production at pathological levels. Therefore, this may be the answer for why there are analogies in the pathogenesis of these two diseases.

OS induces breakdown of the blood–brain barrier (BBB) and increasing BBB permeability, along with alteration of the blood flow. Thus, OS and damaged BBB cause subsequent neurotoxicity and eventually cognitive impairment occurs. In our latter study, we have shown that the expression of a disintegrin and metalloprotease with thrombospondin type I repeats-13 (ADAMTS-13) is an indication of increased BBB permeability and existing damage in the BBB in TE. We have even discussed that ADAMTS-13 may present protective effects on the BBB. In this work, it is quite clear that severely triggered OS causes damage to the BBB. In summary, in TE, NO that is produced at very high levels is thought to cause an increase in BBB permeability along with OS.