The common saying goes: seeing is believing. We are accustomed to think that everything in our visual scene is instantly perceived by the brain and recorded like a photograph on paper. 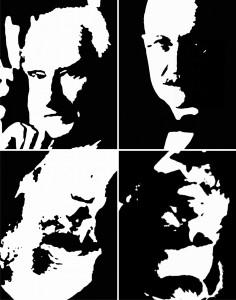 In the 19th century a German scientist named Helmut von Helmholtz made a series of puzzling observations. When we press our eyeball with our fingers, the world moves, however, when we naturally move our eyes the world seems stable. Then, when the eyes are fixated on an object, that object is in focus but most other objects are out of focus and ought to appear blurred. Such blurring is rarely experienced. Moreover due to binocular disparity, everything away from the fixated object ought to appear double, something also never experienced. Helmholtz invented the term “inductive inference” and proposed that perception is influenced by previous experience, that it is a continual hypothesis-testing. The visual scene is populated by objects created from our own expectations and the senses act mostly to provide feedback confirming or rejecting our expectations. One way to imagine this process would be as if we dreamed with our eyes open, so that sensory feedback could constrain our imagination.
Helmholtz’s ideas were mostly forgotten for nearly a century since they were first published in German. The introduction of Bayesian statistics in models of visual perception eventually led to a re-emergence of Helmholtz’s ideas. Experiments on inattentional blindness demonstrated that we do not truly perceive an object until we fixate our eyes upon it. It has been experimentally demonstrated that the part of the brain that is involved in object recognition, the inferior temporal lobe, only detects objects when they are fixated. If objects are presented far away from the point of fixation, neurons in this area of the brain do not respond to them. In binocular rivalry experiments, when different images are presented to each eye, for example a face to the left eye and a house to the right eye, the corresponding conscious percept is not an overlapping image. Rather perception alternates between a house or a face, because house-faces are things not expected to be seen in the real world.

Practically every visual illusion confirms the idea that the brain produces percepts by itself, based on stored models. Perceptual inference is demonstrated in this figure of the four Mooney stimuli. Patches of black and white carefully arranged can elicit the impression of a face (upper two images), unlike in the lower two images when similar black and white patches elicit no such impressions. These impressions seem to be the product of our own mind and this can be more forcefully felt when the picture is turned upside down. Then we can recognise that the previously meaningless images can also elicit impressions of faces, once viewed the right way up. The brain goes through a process of evaluation, comparing its stored visual memories to the incoming sensory signals, only recognising an object or a face when it correctly matches an internal template. The fact that the same image only elicited a percept when it was viewed in a certain way means that the percept can have no other origin but from within our brains. The physical stimulus itself has not changed.

The cerebral cortex is a repository of programs and memories used to evaluate sensory input. Visual perception would not be possible without such visual memories built through experience.