Multiple lines of evidence confirm that as a result of human activities the greenhouse gas emissions are rising more rapidly than predicted and, consequently, the world is warming more quickly. Global climate change threatens for food security because of its potential impact on agricultural crop productivity, especially in the most vulnerable regions as the Mediterranean one. Wheat is one of the most important food crops in Mediterranean areas and its demand is increasing to meet the ongoing increase in the world population, the changes in their food habits and the proliferation of alternative non-food uses with bioenergy purpose. 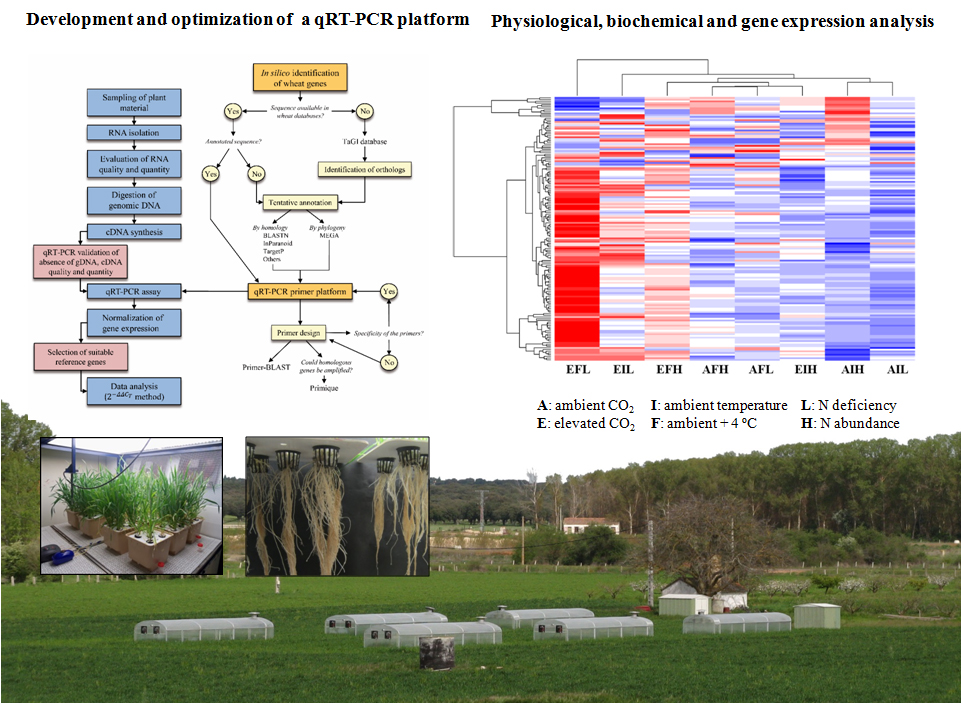 Fig. 1. The imagen shows the flowchart followed for the identification and primer design of the primary C and N metabolism genes in durum wheat. Plant material from hydroponic cultures and field experiments was used for validation of specific primer pairs during the optimization of the qRT-PCR platform. The transcriptional response to the increases in elevated CO2 and temperature at two levels of nitrogen fertilizer was investigated in durum wheat grown in field chambers at IRNASA-CSIC’s experimental farm (Salamanca, Spain). Heat map with clusters showing the changes in the abundance of transcripts for C and N related genes in combination with other physiological and biochemical parameters for each treatment.

Crop development and yield depend on the photosynthetic fixation of the atmospheric CO2 and the assimilation of inorganic nutrients by the roots, mainly nitrogen. Changing environmental conditions continually alters the carbon-nitrogen balance of the plants highlighting the importance of studying the tight interaction between both metabolic pathways. Measuring the changes in expression of a wide range of genes of both metabolisms will be relevant for understanding the mechanisms underlying wheat adaptation to the conditions anticipated for future climate change and thus guarantee the sustainable improvement of its productivity. With this purpose, we have developed a qRT-PCR platform for the expression analysis of more than a hundred primary C and N metabolism genes, using for validating gene-specific PCR primer pairs plant material from three different experiments, one field and two hydroponic cultures. Such platform has allowed us to characterize the transcriptional response to the increases in elevated CO2 and temperature, predicted for the end of the 21st century, in durum wheat grown in field chambers at two levels of nitrogen fertilizer, as well as the relationship between gene expression and physiological and biochemical parameters. This study shows that long-term exposure to elevated atmospheric CO2 concentrations led to a decline of photosynthetic capacity and nitrogen compounds, in special the CO2 fixing protein Rubisco, which was exacerbated in nitrogen deficient plants. These changes were associated with a repression of genes involved in photosynthesis and nitrogen assimilation. High temperatures triggered a similar pattern of changes to those described for elevated CO2, although photosynthesis was not inhibited. Thus, under the future scenario of climate change the extent to which carbon fixation capacity and nitrogen assimilation are down-regulated will depend upon the nitrogen supply. The lower protein and nitrogen compounds contents observed with both elevated CO2 and temperature could compromise the nutritional quality of the grain and, consequently, the agro-food products derived from them.

In addition, the developed platform is a pioneering tool for this plant species, which has enabled us to disclose a series of candidate genes that are differentially expressed in response to future climate change and can also be used to investigate wheat responses to other relevant abiotic stress factors. This tool can likewise be promising to develop improved crops through breeding or biotechnology.