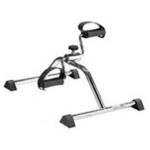 Pedal exerciser: commercially available and can be used at the patient’s bedside.

Lung related complications like infections and clots are common after complex abdominal surgery. These have a negative effect on the patient’s recovery, can prolong hospital stay and can even lead to death. We performed a study to find out whether aerobic exercise with a simple pedal exerciser (commercially available) after surgery can reduce lung related complications. The study involved 60 participants aged 18-years or more who had undergone major surgery. Half of these participated in the exercise program (cases) and the remaining half did not (controls). The participants were selected from a surgical database and were comparable in terms of age, gender, surgery performed and other factors like smoking and pain control. The exercise program involved twice-daily aerobic exercise with pedal exerciser beginning on the second day after surgery or from when the patient was able to sit independently. We found that this form of exercise halved the risk of getting lung infections after major surgery. It also reduced the overall stay in the hospital by almost 2.5 days.

The patients undergoing the exercise progressively felt less breathless after the program each day. Hence, early aerobic activity with a pedal exerciser after complex major surgery has a potential to improve exercise endurance and reduce risk of lung complications in the postoperative period.