Prescription opioid use underestimated in the United States

The opioid epidemic continues to have many negative effects in the US. The US lifespan has been decreasing and opioid overdoses are believed to be responsible. Other consequences of opioid misuse include the increases in emergency room visits involving these substances and babies with neonatal abstinence syndrome. Over-reliance on prescription “painkillers” like oxycodone (Percoset), hydrocodone/acetaminophen (Vicodin), and oxymorphone (Opana) for chronic non-cancer pain increases the risk for misuse of illicit opioids like nonmedical fentanyl and heroin.

Unfortunately, it is extremely challenging for epidemiologists and health care providers to conduct research about controlled substances in the US. The health care system is divided between public and private sources. This results in incomplete data. Most prior research in this area, known as pharmacoepidemiology, uses records from pharmacies. Retail pharmacies are an important source of information.  However, the records of retail pharmacies may not capture all the opioids that are used medically including those from hospitals, Veterans Affairs facilities, or Indian Health Services. Prescription Drug Monitoring Programs (PDMPs) are another source of information. Importantly, there is a federal regulation (42 CFR Part 2) that prevents methadone from being reported to PDMPs when it is used for an opioid use disorder. Methadone is an evidence-based treatment for an opioid use disorder. Prior research using incomplete data sources may have underestimated use of methadone and prescription opioids in the U.S. 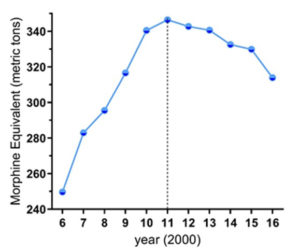 This study examined medical use of opioids over the last decade using a more comprehensive data source which overcomes the deficiencies of many of the prior studies. We used data from the Drug Enforcement Administration. Because some opioids (fentanyl) are stronger than others (codeine), the weights of the ten opioids examined were converted to oral morphine equivalents.

There were three key findings of this report. First, Figure 1 shows that opioids increased from 2006 until 2010, peaked in 2011, and have shown large decreases since.

Second, prior investigations have under-estimated the prevalence of methadone use. By morphine equivalents, methadone accounted for over two-fifths (44%) of the total opioid use, followed by oxycodone (23%), hydrocodone (8%), and fentanyl (8%) in 2016.

Third, there are pronounced differences in medical opioid use between states. Figure 2 shows that the morphine mg equivalent per person for just eight prescription opioids used for pain was almost four-fold higher in Tennessee (932) compared to Washington DC (256). Opioid use was even lower in the US Territories. States where the median age was higher used more opioids.  This suggests that much of the opioid use may be for chronic pain conditions that especially impact older adults like arthritis and lower back-pain. Opioids are not very effective in treating many of these types of pain. 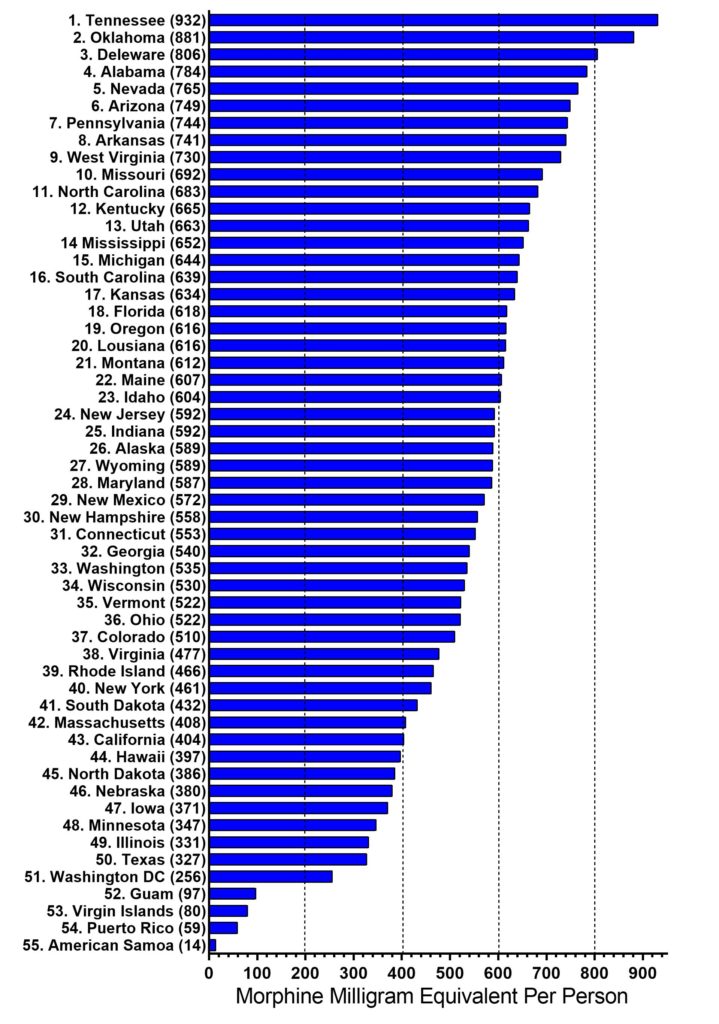 Because this study used a data-source that did not have as many data gaps as those completed previously, it estimated that the use of prescription opioids was 75% higher than in prior research (1,124 vs 640 morphine mg equivalent per person). The Drug Enforcement Administration makes the Automated Reports and Consolidated Ordering System information publicly available each year. Researchers and data-journalists can use this information to learn more about how US pharmacies and hospitals continue to decrease use of prescription pain medications.