The use of adsorption processes for water treatment purposes is a very old stuff. According to Egyptian and Sanskrit inscriptions, water was treated using filtration as early as 200 B.C. Its working principle is quite simple: its takes advantage of attractive forces between dissolved species and the surface of the filter media. The effectiveness of a filtration process for water treatment depends on the interplay of forces between the contaminants to be removed from the aqueous phase and the granular filter media. Filtration processes have been improved over time; new filter materials have been developed. 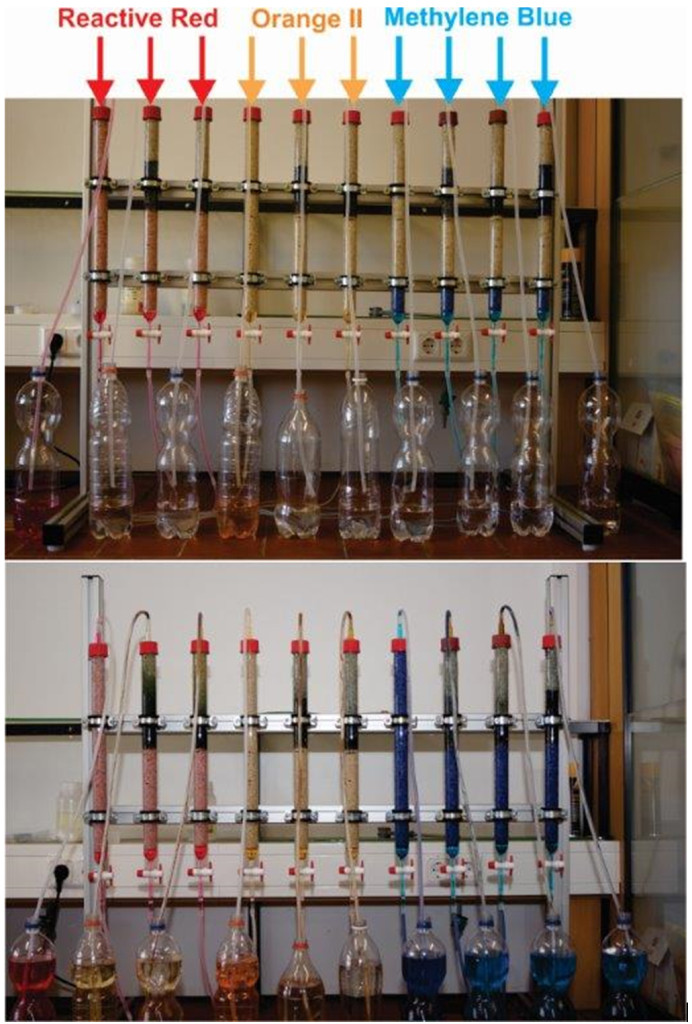 Fig. 1. Photographs of an experimental design evidencing the ion-selective nature of the Fe0/sand/H2O system. The first picture was made 14 hours (day 1) after the starting of the experiments and the second at the end (day 93). It is seen that, at day 1, the breakthrough of anionic dyes (Reactive Red 120 and Orange II) has already happened in sand columns, while methylene blue (MB) is uniformly adsorbed onto sand. At day 93, no quantitative breakthrough of the anionic dyes was observed while MB breakthrough was quantitative in all Fe0-bearing systems after the exhaustion of the adsorption capacity of the sand layer. Modified after Phukan 2015

It is commonly understood that the use of metallic iron (Fe0) for water treatment was born in the early 1990s, when Robert Gillham and his colleagues from the University of Waterloo suggested Fe0 as filling material for subsurface permeable reactive barriers (PRBs) for the reductive degradation of halocarbons. Since then, research on Fe0 PRBs has yielded some 200 field installations worldwide. Fe0 has also been used for (i) agricultural and industrial wastewater treatment, (ii) mine water treatment and (iii) decentralized drinking water provision (household, small community). At present, a large amount of patents has been filled on ‘Fe0 for water treatment’, mostly in Asia, Europe and in the USA.

Fe0 has been mostly regarded as an environmental reducing agent. The corresponding chemical reduction at the Fe0 surface necessarily starts by adsorption of the reducible species. However, the selectivity of this process has not been properly considered. Available Fe0 PRBs have been dimensioned based on the Fe0 mass necessary to chemically reduce the contaminants of concern. On the other hand, although the permeability loss has been identified one of the crucial problems of Fe0 PRBs, the reasoning to address this limitation has not properly considered the volumetric expansive nature (VEN) of iron corrosion. The VEN of metal corrosion was established as early as 1923, 70 years before the advent of Fe0 PRBs. These two examples suggest that research on Fe0 for water treatment has been performed on a biased basis. Additionally, the reactive nature of Fe0 has not always been properly considered as the efficiency of Fe0 materials has been largely compared to that of inert adsorbents in short term studies. This last aspect even contradicts the original idea of using Fe0 to treat large volumes of slightly contaminated water for decades. The reactive nature of Fe0 implies that reliable information can only been gained from investigations of the system’s dynamics.

The differential adsorptive affinity of methylene blue (MB) onto sand and iron oxides (Fig. 1) has been exploited to solve some open questions of the Fe0 research. MB is a cationic dye with (i) good affinity for the negatively charged sand surface and (ii) poor affinity for the positively charged surface of iron oxides (on Fe0). Iron oxides result from in-situ Fe0 corrosion. This means that the adsorptive affinity of a Fe0/sand system to MB depends on the extent of Fe0 corrosion. In particular, three stages can be observed with increasing experimental duration: (i) sand holds its whole adsorptive capacity for MB, (ii) sand is progressively coated with iron oxides, (iii) the entire sand surface is coated by iron oxides. The MB adsorption efficiency is belittled with increasing amount of iron oxides within a Fe0/sand/H2O system. This makes MB an operational tracer for processes in Fe0/H2O systems.

By systematically varying the Fe0 type, Fe0:sand ratio, water chemistry, duration of the experiment, the water flow velocity or replacing sand by another aggregate, the processes yielding contaminant removal in Fe0/H2O systems can be investigated.