Enterobacterial strains resistant to extended-spectrum cephalosporins, carbapenems, aminoglycosides, fluoroquinolones are increasingly reported increasingly reported worldwide. Those strains remain mostly susceptible to polymyxins such as colistin. Polymyxins  that are old antibiotics have been used until recently mostly in veterinary medicine. Due to paucity of remaining active antibiotics for treating human infections, polymyxins are gaining a renewal interest in human medicine. Then, the increasing use of polymyxins in humans select in its turn to polymyxin-resistant strains. 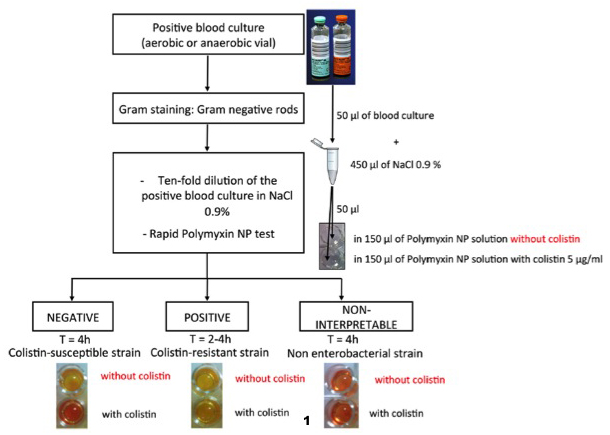 Acquired chromosomally-mediated resistance mechanisms to polymyxins have been described so far mostly in Klebsiella pneumoniae, Escherichia coli and Enterobacter cloacae. A very recent study from China identified the first transferable polymyxin resistance trait in Enterobacteriaceae from from human and animal isolates (November 2015). The plasmid-borne mcr-1 gene encodes a phosphoethanolamine transferase that mediates addition of phosphoethanolamine to the lipid A moiety of the lipopolysaccharide, consequently conferring resistance to polymyxins. This gene has been identified during 2016 mainly identified from Escherichia coli worldwide. Therefore, there is an urgent need for a rapid diagnostic technique for identification of polymyxin resistance in particular in severe infections such as septicemia to optimize the choice of the antibiotic treatment.

The conventional methods for detection of colistin-resistant isolates such as broth microdilution remain time-consuming (24 to 48 h), and methods such as disc diffusion and Etest are not reliable. Recently, the RapidPpolymyxin NP test was developed for rapid identification of polymyxin-resistant Enterobacteriaceae that is now marketed in Europe (ELITech Microbiology) This test is based on the detection of glucose metabolism related to bacterial growth in the presence of a defined concentration of colistin. The formation of acid metabolites is evidenced by a color change of a pH indicator (red phenol) in less than 2 h. In the present study, the polymyxin NP test was evaluated for detection of colistin-resistant Enterobacteriaceae directly from blood cultures. The test was performed with 73 blood culture sets (either spiked or clinical blood cultures) with various enterobacterial species. The test exhibited excellent discrimination between polymyxin-resistant and polymyxin-susceptible enterobacterial isolates, and results are obtained from blood cultures within 4 h. It is easy to perform and requires neither subculture nor a centrifugation step. This test is rapid, specific, and sensitive and allows early identification of polymyxin-resistant Enterobacteriaceae directly from blood cultures. It may be used for choosing any polymyxin-contained antibiotic treatment at the very early stage of the septicemia.