Early detection of breast cancer leads to essential cure of the vast majority of patients, through surgery and associated therapies. However, severe outcomes can be observed even among disease cases currently categorized as low-risk. Approximately 15% of these patients show tumor relapse even years after surgery. We speculated that undetected, microscopic lymph node metastases may account for many such recurrences. 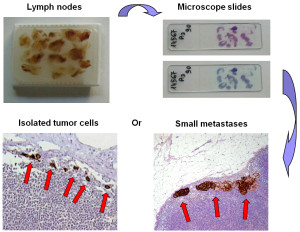 The principle that the burden of metastatic cells (e.g. the number of invaded lymph nodes) determines a proportional risk of breast cancer recurrence has been recognized. We argued that the principle of risk of recurrence as proportional to the extent of metastatic spreading might be equally important at the low end of the spectrum, in the case of microscopic tumor metastases. However, it was difficult to rigorously quantify the impact of such small, difficult to identify lymph node metastases. This led to the drafting of current guidelines, where isolated tumor cells or lymph node metastases smaller than 0.2 mm are classified as “pN0(i+)”, where pN0 means “no metastases”. In other words, it was believed that the risk associated with lymph node micrometastases was small or altogether nil.

Isolated tumor cells can be revaled by detailed microscopic analysis, i.e. using specific tracers over many lymph node sections (Fig. 1). Using this technology, we analyzed a group of 702 cases of breast cancer. Rigorous analyses were performed, according to current clinical and pathological guidelines. On average, 250 lymph node sections were analysed per patient, for a total of 90,000 slides for the whole study. This allowed to show that small lymph node metastases were present in 13% of patients with early breast cancer, that went undetedcted by routine analysis. We followed micrometastatic and control patients for over 8 years after surgery. This revealed that few isolated tumor cells or small metastases are a significant risk factor for metastatic relapse or other adverse events even several years after surgery (Fig. 2).

Notably, the occurrence of adverse events in cases bearing small metastases versus those that did not, clearly diverged at about 36 months after surgery. This was consistent with the intuitive argument that distant metastases require time to grow to a size when they can be detected by a clinician. This also helped explaining controversies among different studies, as most of these adverse occurrences would have been missed by studies with too short observation times.

Findings from numerous clinicians and laboratories are now available, thus permitting to rigorously extend our analysis to many different medical institutions around the world. We conducted such an analysis. Overall, these findings showed that few isolated tumor cells or small metastases indeed are a significant risk factor for metastatic relapse.

Of importance, chemotherapy was shown to have a rather favourable impact on micrometastatic cases, and it did essentially abolish the risk due to micrometastatic diffusion.

Thus, our findings are of potential major impact worldwide: it is important to identify breast cancer patients with even a few cancer cells in nearby lymph nodes. It will then be possible to provide them with appropriate therapy, which will be highly likely to cure these tumors.