The periodic table of elements is among the corner stones of chemistry. In the given order, in both the periods (rows) and groups (columns), elements show some specific properties. However, when going around the bottom of the periodic table (transitions metals) few elements show unusual properties due to relativistic effects. For instance, gold is not silvery like most of the other metals in the same group. Mercury is a liquid unlike its immediate neighbours, cadmium and gold. These differences can be explained by the concepts of quantum chemistry.

Initially, the concepts of quantum chemistry were developed without considering the theory of relativity (the Schrödinger equation, 1925). Latter, Paul Dirac (1928) formulated a relativistic wave equation to account for relativistic effects. They are treated depending on the electron speed relative to the speed of light. Hence, they are more pronounced for heavy elements where electrons attain relativistic speeds. As such, if we calculate the properties of gold without considering relativistic effects, then we get silvery colour, which is not in line with the reality. However, if relativistic corrections are included, the calculated values become more close to the reality. This is mainly due to the contraction of 6s orbital and expansion of 5d orbital of gold making it to absorb in a different region of the electromagnetic radiation compared to silver.

Nuclear magnetic resonance (NMR) properties are among the molecular properties affected by relativistic effects. NMR spectroscopy is a powerful spectroscopic technique used to get detailed information about the chemical environment, dynamics and structure of molecules. Chemists use it to determine molecular structures by analysing for example the chemical shielding (σK, the difference between the applied external magnetic field and the field at the nucleus, caused by the surrounding shells of electrons) in parts per million (ppm), chemical shift (δK, the difference between the chemical shielding of a certain nucleus K and the same nucleus in a reference molecule) in ppm, and spin-spin coupling constant (J, a measure of the interaction between neighbouring nuclei of a molecule) in Hertz. Medical practitioners use the multidimensional NMR imaging technique, magnetic resonance imaging (MRI), for diagnostic purposes.

In this study, the diatomic molecules of silicon selenide (SiSe), silicon telluride (SiTe), germanium selenide (GeSe), germanium telluride (GeTe), tin selenide (SnSe), tin telluride (SnTe), lead selenide (PbSe) and lead telluride (PbTe) were considered to show the importance of relativistic corrections to the nuclear absolute shielding constants. Details of the contributions of the NSR constants and NMR shielding constants are presented in the paper. The σpara contributions obtained from direct shielding calculations are compared with electronic contributions to the NSR constants (Cel in the above equation). I presented the sources of the errors of the previously reported values of all the nuclei in the above molecules. For instance, the difference between Cel and σpara of Si in SiSe is 16 ppm, however, it increases to 6321 ppm for Pb in PbSe (see the figure below). Note that lead is very heavy compared to silicon. The error for the selenium nucleus in most of the molecules is »270 ppm, whereas it is »1125 ppm for the tellurium nucleus. The difference increases as the atoms become heavier showing the importance of relativistic corrections. 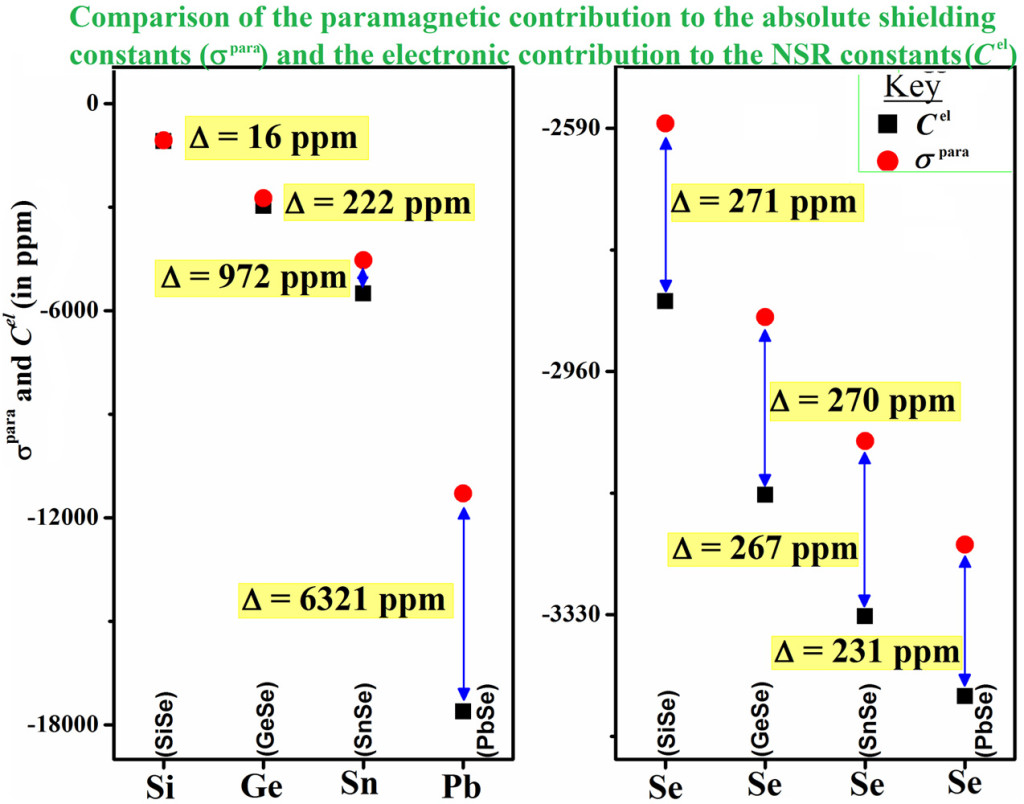