Risk of malaria reemergence in Bulgaria

Malaria is a disease of high medical and social importance. Notwithstanding the efforts of WHO and national systems of public health, it is still widespread over large areas around the globe and it is a cause for high mortality, especially among children and adolescents. As a consequence of geopolitical changes, wars and related social and economic failures, in recent years is observed a trend of increasing migration of masses to more developed countries, predominantly in Europe. Along with asylum seekers, the migration flow is composed also by a large number of economic migrants trying to reach their destination in an illegal way. Significant part of them is arriving from countries endemic for malaria and other infectious diseases. Because it is difficult to cover efficiently illegal migrants by the health system of the country they have entered, they may represent potential source for reintroduction of diseases that have been eliminated. 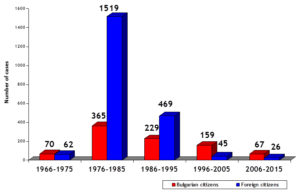 Fig. 1. Distribution of imported malaria cases by citizenship (Bulgarian/foreign citizens), and by decades.

In our article entitled “Imported malaria in Bulgaria, status and prognosis after eradication in 1965” we described the system of surveillance and control of malaria in Bulgaria after its elimination, and based on the number of recorded cases, the suitability of climate and fauna conditions, we attempted to assess the possibility of its reintroduction. Bulgaria is malaria free since 1965. Until 1989 the health system of the country subjected to mandatory laboratory and medical examinations all persons coming from endemic for malaria areas. Since 1989 the system of supervision and control of infectious diseases in the country is more liberal and up to date with the European Union legislation.

Fifty years passed after the eradication (1966-2015) and during this time were recorded 3011 cases of imported malaria in Bulgaria, of which 883 among Bulgarian citizens and 2128 among foreign nationals (Fig. 1).  By origin of acquisition the majority of cases came from Africa, followed by Asia and South America (Fig. 2). Predominant causative agents were P. vivax (n = 1569, 52.1%) and P. falciparum (n = 1239, 41.1%), followed by P. ovale (n = 77, 2.6%), P. malariae (n = 18, 0.6%), mixed malaria (n=74, 2.5%), and unidentified species (n = 34, 1.1%). From 1966 until 2015 were reported 16 cases of falciparum malaria with fatal outcome. Most of the severe falciparum cases were complicated by cerebral malaria or kidney failure. Over the period, complications were not recorded among children. In regard to transmission, 36 cases of malaria acquired through blood transfusion and five cases of malaria transmitted via kidney transplantations performed in India and Pakistan were reported in the country. 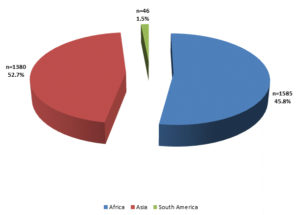 In 1995–1996, for first time after eradication, local malaria transmission caused by P. vivax was reported in Bulgaria. Source of infection were illegal immigrants from Afghanistan and Pakistan who spent several days in the Valley of Struma River near the town of Sandanski in South-Western Bulgaria. Total of 18 indigenous cases of introduced vivax malaria were recorded in the area during the outbreak. Malaria caused by P. vivax is of greater concern due to the fact that the species adapts easy to the local mosquito vectors and gametocytes are already present in the blood in the first occurrence of the disease.

In Bulgaria climate and fauna condition are favorable for malaria transmission, and the most suitable season is from early April to late October. Any imported case of malaria during this period may become a source for efficient mosquito infection.