Sliding esophagoplasty. Can esophagectomy be avoided in esophageal obstruction due to huge thoracic aortic aneurysm?

Unfortunately, in large thoracic aortic aneurysms, which have been previously treated by endovascular stenting, compression of esophagus and/or of the trachea can develop as rare and as yet lifethreatening complications  due to progressive enlargement  of the aneurysm walls. In particular, compression of the esophagus can eventually lead to esophageal obstruction and oesophageal perforation causing mediastinal infection and potentially evolving in an aorto-oesophageal fistula which has been reported to occur in 1.7%–5% of thoracic endovascular aortic repair patients, and which represent a frequently fatal complication also in experienced center. 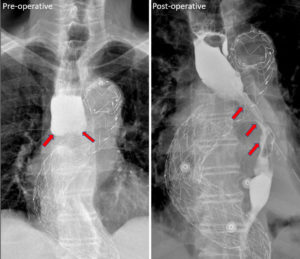 Common symptoms are not specific including dysphagia, chest pain, and weight loss which can be easily mistaken for other diagnosis. Barium swallow can be useful revealing an extrinsic compression/obstruction of the thoracic esophagus. Usually esophagoscopy does not add further significant details and its avoidance eliminate risks of iatrogenic oesophageal perforation. Overall, the definitive diagnostic tool is computed tomographic (CT) scan, which clearly depicts the morphologic characteristics and extension of the thoracic aortic aneurysm as well as the compression of the esophagus.

An early diagnosis is thus fundamental but can be jeopardized by the paucity of symptoms in the early stages.

We believe that early detection, multidisciplinary approach  and prompt surgical treatment plays a key role  on patient’s survival although according to previous literature reports, aggressive surgical management, including radical oesophagectomy, aortic replacement and greater omentum wrapping may not achieve satisfactory outcomes and can be associated with prohibitive mortality rates.

We have recently reported on a 71 year old man with multiple comorbidities and a history of thoracic aortic aneurysm, which was previously managed by endovascular stenting and who was admitted at our centre due to progressive deterioration of dysphagia and weight loss in the last 13 months. A chest CT  showed an aneurysm extending from the aortic arch to the descending thoracic aorta with no evidence of endoleak and compressing the thoracic esophagus below the tracheal bifurcation (Fig. 1). A barium esophagogram was also carried out and showed an abrupt interruption of the contrast medium at the level of the of the aneurysm with dilation of the esophageal lumen above the obstruction and no signs of esophageal perforation (Fig. 2).

Since the patient was considered at high surgical risk at a multidisciplinary preoperative assessment we decided to try to avoid esophagectomy and make all attempts at preserving the native esophagus and perform a novel surgical procedure denominated sliding esophagoplasty. The operation was aimed at re-routing the esophagus aside from the thoracic aortic aneurysm. 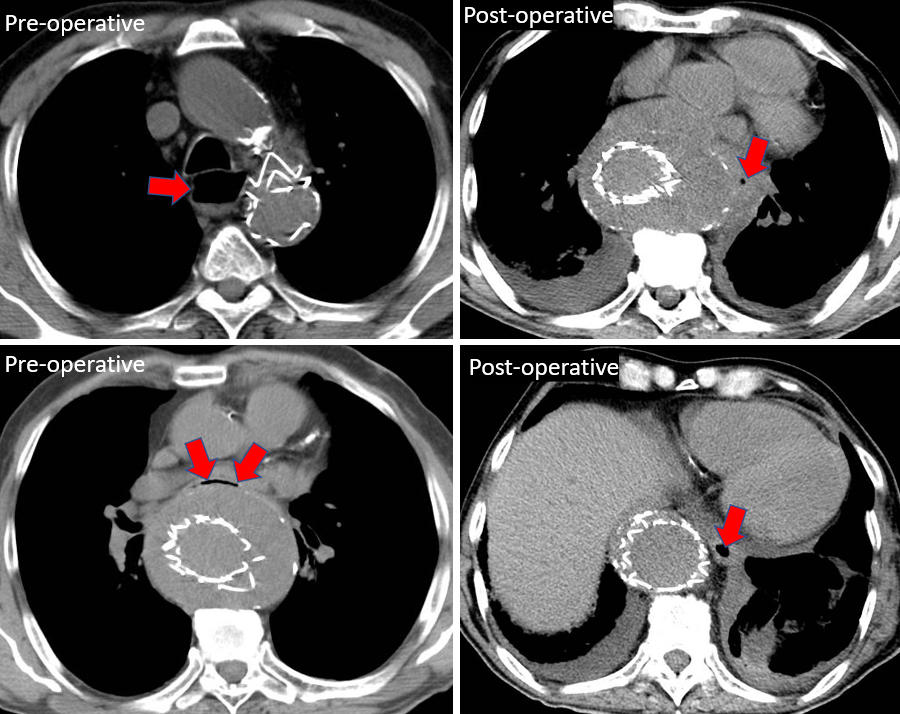 The postoperative course was uneventful and postoperatively barium swallow showed the satisfactory restored passage of the contrast medium through the full length of the esophagus without leakage (Fig. 1, 2). The patient was thus allowed to eat and rapidly discharged from the hospital. Six months later he could eat satisfactorily and had gained 8 kg in weight.

In conclusion, we believe this novel surgical technique can be taken into account as a relatively safe and effective surgical method to be used in such rare high-risk patients.