Color originates from absorption and reflection of visible light. The reason that a molecule can absorb a certain color of light is the interaction between molecular electrons and incident light. If the electronic state of a molecule matches (= is resonant) with the energy of the external light, the external light is absorbed by the molecule. Simultaneously, the result of the mixture of non-absorbed and reflected visible light is the “color” what we can see through our eyes. Besides, this phenomenon indicates that if the electronic state of the molecule changes, the range of light absorbed by a molecule also alters, leading to the color change. 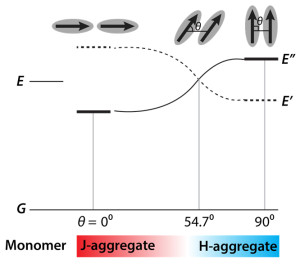 Then, let us assume there are two nearby molecules. In principle, two interacting molecules can form dimers in poor solvent accompanied with either blue-shifted or red-shifted ranges of light absorption. The former is called “H-aggregate”, whereas the latter is “J-aggregate”, depending on the values of the angle (θ) between the longitudinal axis of the transition moments of monomer ( 90°> θ > 54.7° is H-aggregate, whereas  54.7°> θ>0° is J-aggregate, Fig. 1). So far, J-aggregate of the widely-used fluorescent dyes has been mostly achieved by adsorption on the surface such as glass or zeolite.

Therefore, we aimed to develop a molecular system to facilitate a slipped-alignment of fluorescence dye J-aggregate via introducing a simple chemical group. For this purpose, we focused on a (9-anthryl)phenylene group and hypothesized that a combination of (9-anthryl)phenylene and charged fluorescent dye can form unprecedented intermolecular assemblies. Among various fluorescent dyes, rhodamine is chosen owing to i) its size and planarity comparable to anthracene and ii) electron-deficient characteristic as compared to electron-rich anthracene moiety. Both factors are considered to assist the intermolecular interaction between rhodamine and anthracene moieties.

As shown in Fig. 2, we have recently developed color-changeable fluorescence dye, named SiR-An and TMR-An, composed of tetramethylrhodamine and anthracene derivatives. Both of the compounds are found to form J-aggregate, which accompanies red-shift in light absorption (red-to-blue color change), in the aqueous solution upon the addition of sodium chloride (NaCl). As shown in Fig. 2b, color of TMR-An solution changes from pink, violet to blue which correspond to monomer, H-dimer, and slipped-stacked J-aggregates, respectively. Furthermore, the absorption spectra of SiR-An show approximately 100 nm shift upon the addition of NaCl (Fig. 2c). As explained above, this pink-to-blue color change originates from a change in the electronic state of fluorescent dyes as they start to be aligned in the aqueous solution with the aid of halide ion, Cl–. Via X-ray crystallographic analysis of SiR-An, the angle between two silicon-containing rhodamine (θ) is determined to be 20.9º, which is in a range of J-type aggregation (Fig. 1). The slipped-alignment of fluorescent dyes could be achieved because of i) cooperative face-to-face and edge-to-face interactions among SiR-An molecules and ii) π-π interaction between two C–N bonds at the edge of rhodamine moieties. This is the first example for rhodamine to make a spontaneous slipped-alignment in solution.

Compared to fluorescent and electronic sensors, colorimetric sensors hold great potential since a presence of the target can be easily recognized with the naked eye. Assuming a user is in an emergency, such as terror and fire sites, lethal toxic compounds should be instantaneously and clearly detected without any special equipment. We believe the combination of a fluorescent dye and (9-anthryl)phenylene group can provide a new concept of colorimetric sensors; pink-to-blue color changes induced by spontaneous aggregation and dissociation of fluorescent dye molecules.