Social phobia: indication of a genetic cause

People with social anxiety avoid situations in which they are exposed to judgment by others. Those affected also lead a withdrawn life and maintain contact above all on the Internet. Around one in ten people is affected by this anxiety disorder over the course of their life. Researchers at the University of Bonn have now found evidence for a gene that is believed to be linked to the illness. It encodes a serotonin transporter in the brain. Interestingly, this messenger suppresses feelings of anxiety and depressiveness. The scientists want to investigate this cause more precisely and are thus looking for more study participants. The results will be published in the journal “Psychiatric Genetics”. 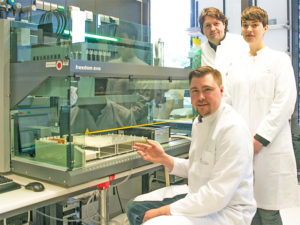 Heart palpitations, trembling and shortness of breath: those who suffer from social phobia avoid larger groups. Verbal tests or everyday arrangements are filled with fear – after all, other people could make a negative judgement. Those affected often avoid such situations for this reason. Contact is often easier over social media or anonymously over the Internet. Social phobias are among the psychiatric disorders that are triggered simultaneously by genetic and environmental factors. “There is still a great deal to be done in terms of researching the genetic causes of this illness,” says Dr. Andreas Forstner from the Institute of Human Genetics at the University of Bonn. “Until now, only a few candidate genes have been known that could be linked to this.”

Individual base pairs can vary in the DNA

Together with the Clinic and Policlinic for Psychosomatic Medicine and Psychotherapy at the University Hospital Bonn, Dr. Forstner is conducting a study into the genetic causes of social phobia. The research team investigated the DNA of a total of 321 patients and compared it with 804 control individuals. The focus of the scientists lay on what are known as single nucleotide polymorphisms (SNPs). “There are variable positions in the DNA that can exist to various degrees in different people,” explains Dr. Forstner.

The cause of genetic illnesses often lies in the SNPs. It is estimated that more than thirteen million such changes exist in the human DNA. The scientists investigated a total of 24 SNPs that are suspected in the widest sense of being the cause of social phobias and other mental disorders. “This is the largest association study so far into social phobia,” says associate professor (Privatdozent) Johannes Schumacher from the Institute of Human Genetics at the University of Bonn.