Some questions remain unanswered for alpha-Crystallin

α-Crystallin together with β- and γ-crystallins make about 40% of the dry weight of fibrous cells in eye and 90% of all proteins. α-Crystallin is responsible for the eye lens transparency creating the necessary refractive index (1.4 in humans) that requires a very high protein concentration (450 mg/ml for human). α-Crystallin is formed of homologous αA- and αB-crystallins. It was proved that in addition to performing the structural function, α-crystallin is a chaperone-like protein belonging to the sHsp family. α-Crystallin was demonstrated to prevent denaturation of proteins and their aggregation, which can lead to cataract development. αA-Crystallin is expressed in fibrous cells of eye lens. As for αB-crystallin, it is found not only in eye lens but also in different organs and interacts with some proteins being involved in different metabolic processes. This may indicate significant specialization of αA-crystallin as a chaperone for eye lens crystallin. The peculiarity in the lens development is that fibrous cells lose gradually the nucleus, ribosomes, proteasomes and mitochondria and become incapable of effective metabolism including protein exchange between cells. Modified proteins begin to accumulate in the lens nucleus. 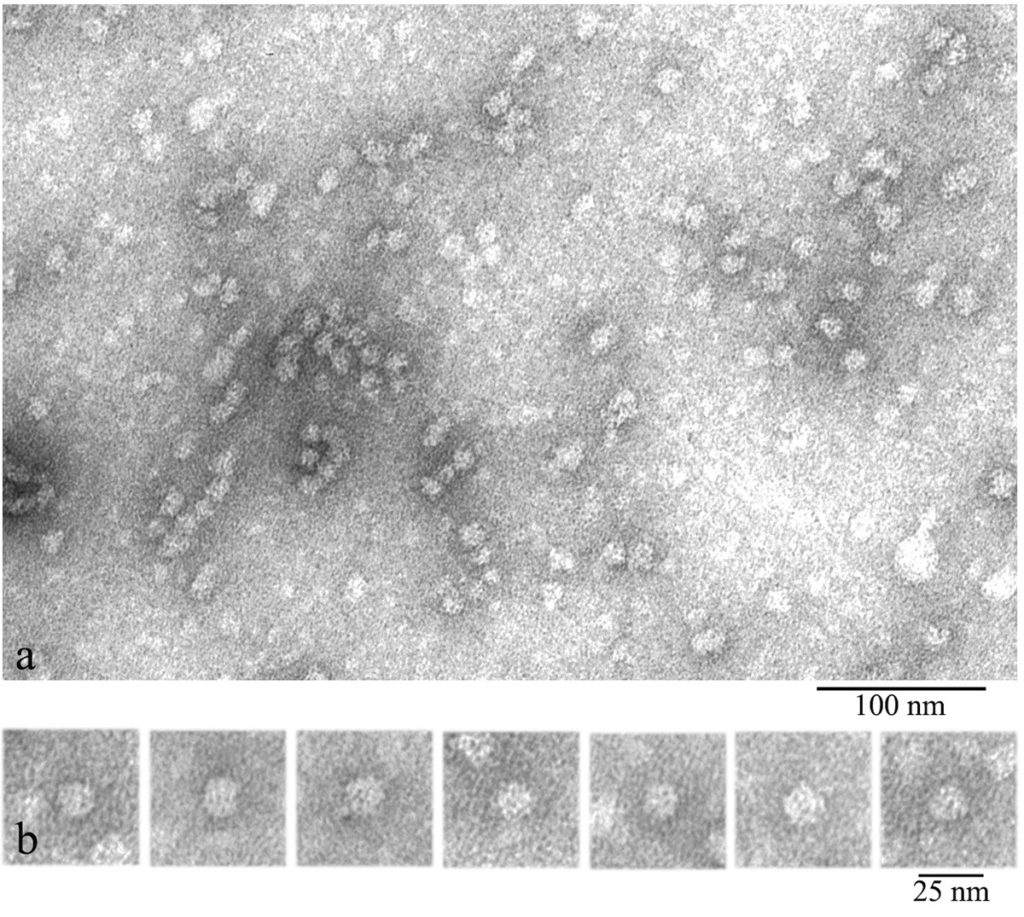 As evidenced by structural studies, α-crystallin forms strong heterogeneous complexes with molecular mass of 300-1200 kDa, which may prevent its crystallization. It was shown that each isoform (αA- and αB-) of α-crystallin can form corresponding crystallin complexes.

The determination of α-crystallin structure can facilitate studies of the chaperone function of α-crystallin and explain its capacity to provide for eye lens transparency. The basic difference between the α-crystallin (cryoEM, resolution of 44 Å) and recombinant αB-crystallin complex (29 Å) is that the last has a well-defined cavity inside it, whereas α-crystallin displays only a slightly lesser density in the center of complex. Later the 3Dmodel for the αB-complex as the most homogeneous one was defined.

To design the model, it is necessary to determine molecular weight, dimensions of the studied complex that will be used. Using the electron microscopy method we studied the α-crystallin complexes from the central (nucleus) and peripheral (cortex) parts of bovine lens. Our data show that α-crystallin preparations from both regions are considerably heterogeneous (Figs.1 and 2). For reconstruction of the 3D structure of the α-crystallin complex, we chose particles from the cortex of 13.5 nm in diameter. According to the literature data, these particles have the average sedimentation coefficient of about 22.5 S, which theoretically corresponds to the molecular mass of about 700 kDa. The constructed model has rounded slightly elongated outlines and a slightly decreased density in the particle center, which agrees with the cryoEM model proposed previously. Attempts to construct a model of α-crystallin for particles with large size give similar results. In our opinion, the strong heterogeneity of the α-crystallin complex is an obstruction upon creating a reliable model of α-crystallin 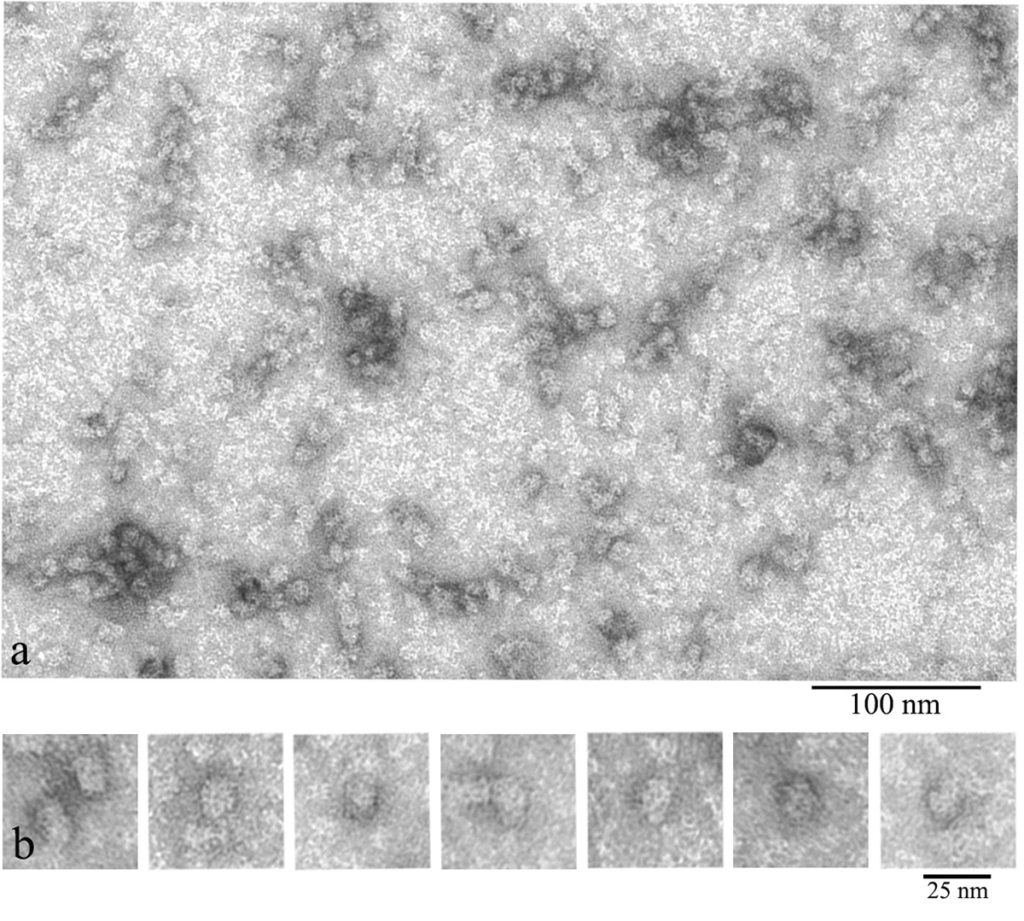 Fig. 2. Electron microscopic images of the preparation of native α-crystallin bovine from the nucleus (C = 0.2 mg/ml, 20 mM Tris-HCl (pH 7.5), 100 mM NaCl, 1 mM EDTA, 37°C): (a) ; (b) – a selection of single particles of the most representative population of the α-crystallin complex (asymmetric, bean-shaped particles with dimensions of about 15×20 nm). This population is represented by particles of a larger size than that of the cortex.

A review of publications devoted to studying α-crystalline shows that there remain many questions on the structure and functioning of α-crystallin which gives grounds to various conclusions. We believe that the existence of heterogeneous oligomers is an evolutionary gain not only to prevent crystallization of α-crystallin and provide for lens transparency, but it is also related to the chaperone-like function. We suggest that oligomerization of α-crystallin is also an evolutionary gain for preserving α-crystallin in the inactive form. This state of α-crystallin allows fast reaction to different changes in physiological conditions (stress, temperature, modifications etc.) and rational use of chaperones. For example, upon phosphorylation the complex dissociates into smaller oligomers (up to dimers) and the chaperone activity of α-crystallin increases. And finally, more frequent are questions on the functioning of α-crystallin under conditions in vivo. So far there have been no methods for studying proteins in very high concentrations. Therefore eye lens has remained one of the most puzzling and not yet irrevocably deciphered objects in organism. It seems to us that many of the available data should be analyzed anew and comprehended taking into account the conditions modeled in vivo.