Former drinkers, that is those who have stopped alcohol use, have higher mortality than lifelong abstainers. Higher mortality may be due to some disease, alcoholism or ending beneficial moderate drinking, which has been found to decrease mortality. To study the latter possibility former drinkers and light drinkers were compared. All-cause mortality relative risks (RR) were adjusted for baseline disease or self-rated health and major risk factors,  Only three out of 87 studies had published data needed for this comparison. 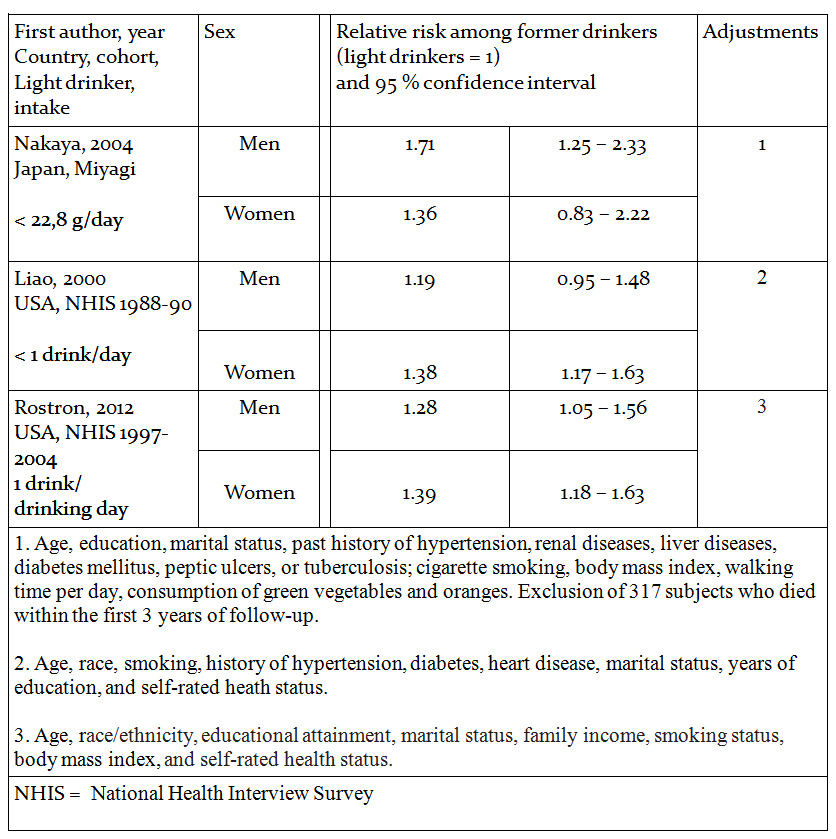 Light drinkers had a reported alcohol intake of up to 2 drinks (24 g of 100 % alcohol) per day or drinking day. New RRs were calculated from the published ones with light drinkers as the reference group. In two of the three comparisons among men, former drinkers had higher RR for death than light drinkers. In the third one, there was no significant difference but the point estimate of RR was elevated. The same was true for women (Tab. 1). Taken all these three studies together, the pooled RR was 1.31 (95 % CI 1.15 – 1.50) for men and 1.38 (1.24 – 1.55) for women.

These findings are likely to be explained by the discontinuation of alcohol intake among former drinkers. An alternative explanation for the present finding is that the former drinkers may have had some diseases that remained unadjusted. Alcoholism may remain hidden but two facts speak against this as a major explanation. First, smoking, a strong correlate of alcohol intake, was adjusted for in all the three studies. Moreover, one of the studies adjusted also for liver diseases. Secondly, in a large U.S. study no alcoholism cases were found at baseline among any former drinkers, irrespective of the level of alcohol intake.