A growing number of studies have revealed that reversal of intestinal microbial dysbiosis via dietary intervention provides promising benefits to our health. Manipulation of gut microbiota to achieve optimum health benefits is attractive but realizing it precisely is challenging because it remains unclear which kind of microbiota structure is good and how to establish it, which is mainly due to the complexity of gut ecosystem. For instance, hundreds of different bacteria located in the intestine, each of which may contain strains varied in genomes and thus diverse in functions, such as in utilization of foods and metabolite production. 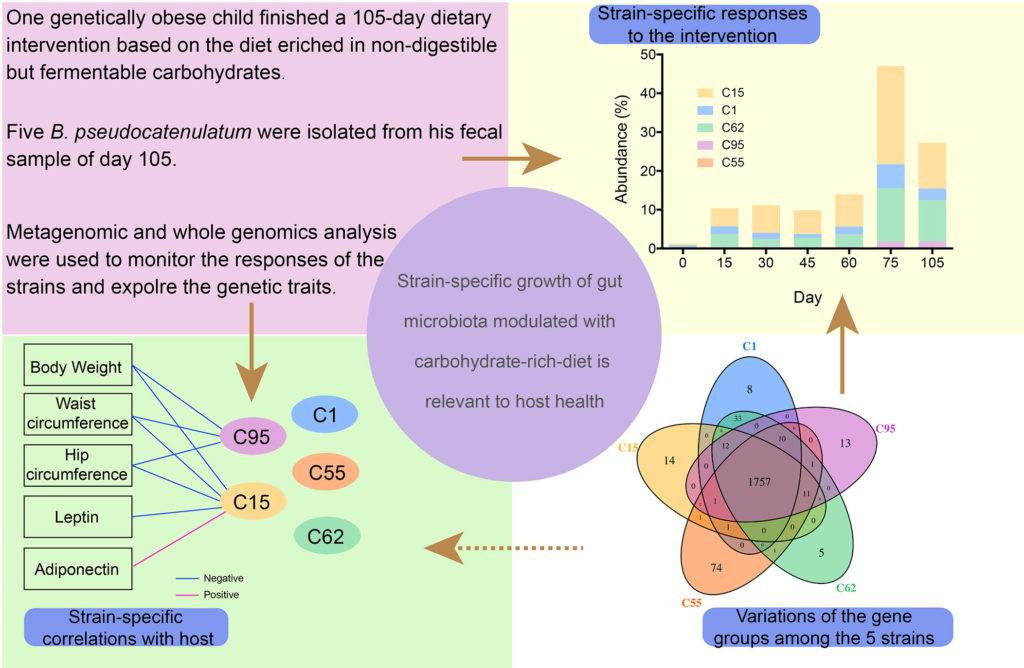 Here, an obese child with Prader-Will syndrome had underwent a 105 days’ dietary intervention, composed of whole grains, traditional Chinese medicinal foods and prebiotics (the WTP diet). The intervention was performed in three phases. At phase I (day 0 – 60), only the basic WTP diet was provided and more 100 g prebiotics was added at phase II (day 60-75). During phase III (day 75 -105), 100 g more prebiotics was continued but less WTP diet was supplied. After the intervention, the child’s body weight reduced from 140.1 kg to 114.3 kg, both the plasma glucose and lipid homeostasis were improved to the normal ranges, and the inflammation was alleviated.

Using metagenomic sequencing to monitor the changes of gut microbiota during the intervention, we found a significant shift of the gut microbial community including the decrease of Escherichia and Klebsiella spp. and the increase of Faecalibacterium, Lactobacillus and Bifidobacterium spp. The abundance of the Bifidobacterium microorganisms became remarkable since day 15 and kept as a predominant genus through the entire interventional period. Moreover the shifts of its abundance were consistent with the changes in diet: increasing from 27.47% when the child received basic WTP diet to 65.53% on day 75, and decreasing to 36.41% in phase III. Since the dietary intervention modulated the growth of Bifidobacterium in a sensitive way and Bifidobacterium is widely reported to have beneficial effects to host health, we performed a deeper analysis on this genus. In total, 9 Bifidobacterium species were identified and B. pseudocatenulatum was the most dominant one. Intriguingly, we isolated 5 B. pseudocatenulatum strains (termed C1, C15, C55, C62 and C95) from the child’s fecal sample on day 105 and found that the 5 strains had differential responses to the dietary intervention. The growth of C55 and C95 remained unaffected, while the other three C1, C62 and particularly C15 were promoted to different extents. Only two stains were relevant to the improvement of the host health. The increase of B. pseudocatenulatum C95 was correlated with the decease of anthropometric markers, including body weight, BMI, waist circumference and hip circumference. Furthermore, B. pseudocatenulatum C15 was also correlated with the improvement of inflammatory markers, including the decrease in leptin and the increase in adiponectin. To understand the genetic traits involved in these strain-specific differences, comparative genomic analysis of these 5 strains were performed. We found genomic microdiversity, including the different copy numbers of core functional genes, especially those involved in carbohydrate utilization, may contribute to those differences. Take B. pseudocatenulatum C15 as an example, it harbored the most diverse types and highest gene copy numbers of carbohydrate-active enzymes targeting plant polysaccharide, which might explain why it had the highest abundance after the dietary intervention.

The strain-specific growth of five B. pseudocatenulatum under the modulation of carbohydrate-rich-diet and their varied beneficial effects to host health highlight the necessity of understanding strain-level differences in future personalized gut microbiota manipulation.