Structure and function of the esophageal mucosa

Structure and function go hand-in-hand amongst the morphology, morphometry, biomechanics and secretory potential within the alimentary tract mucosa, submucosa and muscularis propria.  Structure must evolve first during the development of fetus and function follows closely and progressively especially when the baby is born. The structure of the esophageal mucosa may undergo changes when it remains under the challenge of gastric acid and pepsin during episodes of gastroesophageal reflux (GER). Structural changes can be as fine as dilated intercellular spaces (DIS) revealed in patients with negative endoscopically reflux disease (NERD) but still can generate heartburn symptoms, or can be very advanced as mucosal erosions seen in patients with reflux esophagitis (RE). Structural changes leading to development of endoscopically-confirmed mucosal erosions in RE will inevitably result in changing secretory function of the mucosa as well as submucosa where esophageal submucosal glands are located. 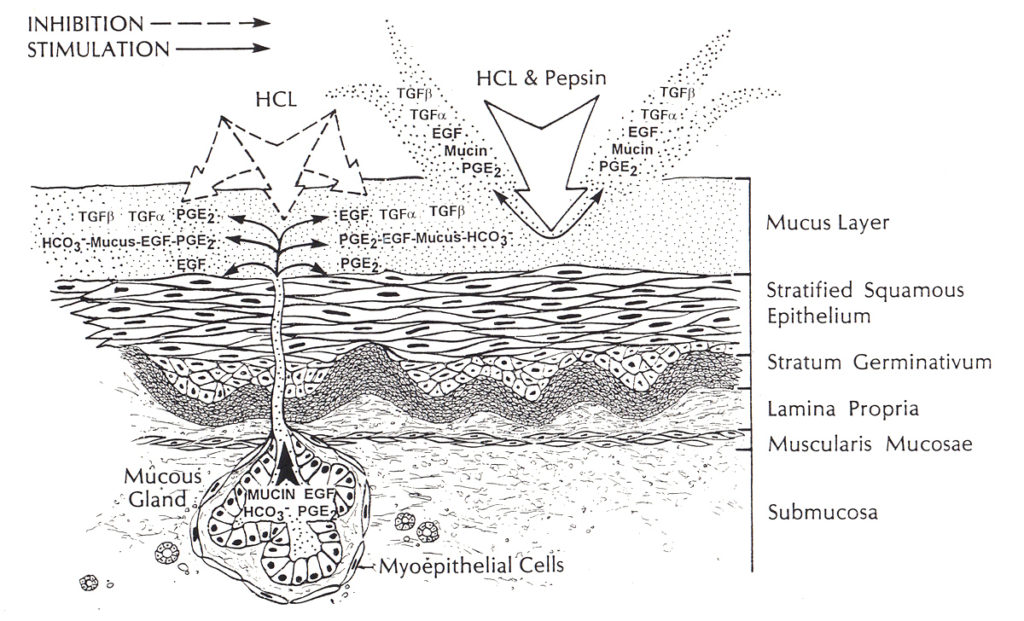 Fig. 1. The role of the mucus-buffer layer operating on the luminal aspect of the esophageal squamous epithelium as a vanguard of mucosal protection facing proteolytic activity of gastric acid and pepsin within the gastroesophageal refluxate (reproduced from our previous publication, reference #8, after permission granted by publisher). The esophageal pre-epithelial protection represented by mucus-buffers layer remains under the impact of continuous erosive power of gastric acid and pepsin tandem leading to gradual digestion of the mucus, mucin and proteins on its luminal aspect but its thickness is always renewed at its base primarily by fresh secretion of mucin, mucus, buffers, epidermal growth factor (EGF), transforming growth factor α (TGFα) from the esophageal submucosal mucous glands.

The morphological integrity of the esophageal mucosa is defined by equilibrium between aggressive factors and protective mechanisms. Aggressive factors are dominated by acid and pepsin whereas protective mechanisms, also called esophageal mucosal barrier, are represented by intraluminal neutralization of acid and proteolytic activity of pepsins by buffers, mucins, mucus accompanied by peptide growth factors, apical junction complex, ion transport, repair of potential cell injury by cell proliferation and an adequate mucosal blood flow. Esophageal mucosal barrier operates at pre-epithelial, epithelial, and post epithelial compartments and participates in prevention of epithelial injury, healing of epithelial cell necrosis and in prevention of the potential development of intestinal metaplasia, dysplasia and ultimately esophageal adenocarcinoma.

The secretory function of salivary glands, driven by the esophago-salivary reflex, in patients with RE.
Esophageal mucosal exposure to HCl thus lowering intraluminal pH during the GER episodes evokes symptoms of heartburn stimulating esophageal intramucosal cholinergic and adrenergic chemoreceptors that initiate the so-called esophagosalivary reflex  response within parasympathetic (governing inorganic components such as buffers and volume of saliva) and sympathetic (that governs secretion of salivary organic components) pathways.

Interestingly, we have demonstrated that mastication of the tasteless parafilm, that could be substituted by sugarless chewing gum in the clinical scenario, resulted in profound and significant increase in the rate of secretion of salivary protective factors in patients with RE. The volume of salivary flow increased by 215%, salivary bicarbonate secretion by 257%, salivary mucin secretion by 135%, salivary EGF secretion by 207%, and salivary PGE2 secretion by 240%. These data seem to imply that application of masticatory stimulation in clinical scenario may result in significant enhancement of mucosal protection within the pre-epithelial barrier compartment and help to restore the equilibrium between aggressive factors and protective mechanisms. 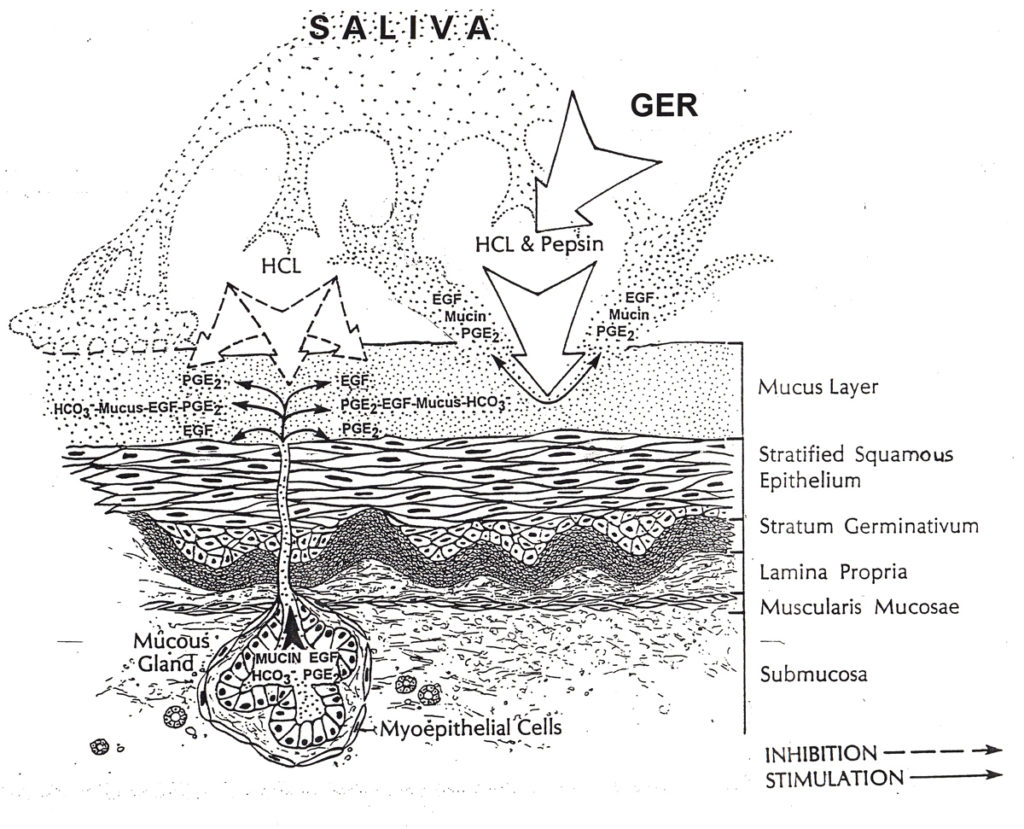 Fig. 2. The esophageal pre-epithelial mucosal defense represented by the mucus-buffer layer maintaining renewal of its thickness owing to continuous secretion from the esophageal submucosal mucous glands and salivary glands secretion serving like umbrella protecting the esophageal squamous epithelium from the rain of gastric acid and pepsin during episodes of gastroesophageal reflux delivered to the esophageal mucosa through the act of swallowing, especially during its stimulation by symptoms of heartburn. (reproduced from our previous publication, reference #4, after permission granted by publisher).

In summary, since patients with RE exhibit impairment in the rate of secretion of salivary protective factors such as EGF, bicarbonate buffers, mucin, proteins, thus their protective power within the of the esophageal pre-epithelial barrier is significantly compromised setting the stage for potential mucosal injury during excessive inflow of aggressive and highly injurious GER.  On the other hand, if in patients with NERD esophageal epithelium is well preserved in spite of exposure to injurious GER one may assume that these patients may have extra benefit from protection provided by stronger flow of salivary secretion.  A schematic outline of contribution of salivary secretion rich in protective factors to enhancement of the quantity and the quality of the esophageal preepithelial barrier represented by the mucus-buffer layer is illustrated by Figure 2. Salivary secretion is of great value for its protective potential as its high content of salivary mucin, proteins, and buffers makes it very viscous and easily attaching to the mucus-buffer layer covering the esophageal epithelium.