It has become increasingly recognized that something essential is missing in the traditional interpretation of brain signals if this builds solely on the computer-metaphor (‘the brain as a computer’). In the frame of so-called ‘neural field models’ only the contents of information is described by the variation of electrical brain signals. Nothing can be said about the meaning of this information, which is within the subjective domain of the observing agent. However, brain function reaches far beyond computational and communication systems. It has become apparent that the brain offers an ‘embodiment of mind and experience’ in a very special way and, in particular, there are physical properties in the brain that can be uniquely addressed to this role. Now, the decisive question is: which physical properties can combine or bridge the informational structure of the brain with the experiential or purely subjective meaning of this information? Why is the activity of our nerve cells somehow connected with a ‘feeling’, a subjective impression of colour, shape, location, comfort or discomfort, pain, sadness or joy? Are there physical properties that carry experiential qualities as such? This view has been claimed before by ‘pan- or micro-psychistic’ approaches to the study of consciousness (Strawson, 2006). If so, we have not yet identified these physical properties unanimously and there are understandable doubts whether we would even be able to recognize an answer to this question, if this answer is based on purely physical argumentations and expressions. As it looks, subjectivity is not typically within the frame or language of physical sciences. 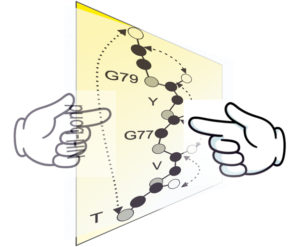 Fig. 1. Electron transfer along a Moebius band toplogy provided by backbone atoms of an alpha-helix lining the filter region of ion channels (one of four subunits is shown). Helicity leads to an Inversion or reflection of orientation.

In this field of tension between Science and Philosophy Bernroider (2017) suggests a new role for physics to bridge the great divide between information based processes in the brain and the ‘feelings’ that are associated with these processes. In this paper I propose a particular topology for subject-object relations and argue that we can find a physical realization in living organism that provides a continuous and conformal transformation between both domains. The two opposing physical domains suggested are related by inversion or parity symmetry or simply by mirror reflections (Fig. 1). In particular, I provide evidence that electron-spin dynamics along the atomic configuration of ion-filter channels can find a geometrical interpretation through so called ‘non-orientable’ or ‘one-sided’ surfaces which can offer a conformal and continuous parity change or inversion without crossing edges or boundaries. These somehow strange ‘2-dim flats’ with the topology of Moebius-bands embedded in 3-dim space are realized by a special helical topology of atoms from amino-acids lining the ion-selective region of channel proteins. Chirality or ‘handedness’ plays a decisive role in this arrangement. As ion transportation is also ‘selective’ for specific ions (e.g. potassium over sodium) a distinct geometry of Coulomb-type electrostatic interactions between ions and electrons bound to lining carbonyl oxygens is required. To achieve this geometry, a highly conserved sequence alignment involving an alternation of the usual left-handed L-amino acids with achiral amino acids that can serve as ‘surrogate’ D- or right handed amino acids (such as Glycine) is necessary (e.g. Chattopadhyay et al. 2005). It is precisely this arrangement (the TVGYG motive shown in the insert figure) which provides the topological base for a Moebius-type ladder along which a bridge-mediated and spin-selective electron transfer (CISS) can occur. I advocate the view that the dual physical spaces related by inversion or reflection in the sense above reflect a basic dichotomy between subjective meaning and physical contents. In general transitions as such are ‘non-physical’ in the canonical sense (‘only states are physical’) and it seems that it is this ‘hidden element’ in physical dynamics that can host the experiential property as claimed by a micro-psychistic perspective that characterizes subjectivity.