Clostridium difficile is a gram-positive spore-forming anaerobic bacterium that causes antibiotic-associated diarrhea and pseudomembranous colitis in humans. C. difficile can be isolated not only from patients but also from several animal species (such as pigs and cows), which are considered to be reservoirs of C. difficile. The hypervirulent ribotype 078 has been reported as the predominant ribotype in livestock animals worldwide. In Japan, most livestock waste is treated by composting to obtain manure compost. Composting is one of the natural processes capable of stabilizing livestock waste. Proper composting effectively destroys pathogens by the high temperatures (>60°C) achieved through the metabolic heat generated by microorganisms in manure compost. However, C. difficile spores are highly resistant to extremes of temperature, desiccation, and various chemicals and disinfectants. 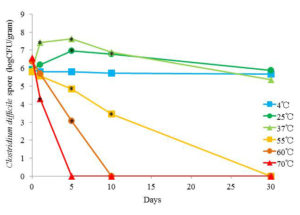 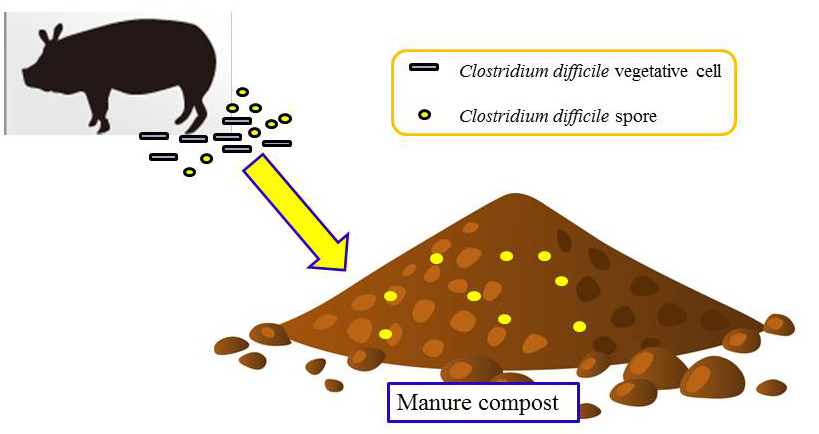 Although proper composting would reduce the abundance of C. difficile by thermophilic temperature, C. difficile spores occasionally survive after composting. In addition, composting may not always reach temperatures sufficiently high to kill pathogenic bacteria, because conditions might not always be optimal in terms of initial feedstock (e.g., too dry or too wet) or weather (low ambient air temperature). And livestock wastes are not treated by composting and are directly applied to agricultural land in some countries. In the present study, we show that manure compost derived from pig farms might contain C. difficile, including hypervirulent strains (Fig. 2). Spreading fresh manure or incompletely composted manure to land presents a higher risk of C. difficile transfer to the food chain. Therefore, the survival of C. difficile in fully processed manure compost is an important aspect that should not be ignored.