Suvorexant, a dual orexin receptor antagonist, may work as a glucose regulatory switch

Glucose is the predominant metabolic fuel for the brain. Thus, the mechanism of glucose regulation is crucial to survival. Insulin is the main glucose regulatory hormone among redundant glucose regulatory factors. However, we found that suvorexant, a dual orexin receptor antagonist, decreased glucose levels independent of insulin levels. 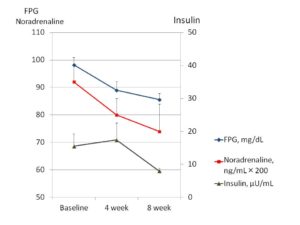 Fig. 1. Changes of the levels of glucose, noradrenaline, and insulin with suvorexant
Glucose levels significantly decreased at 4 and 8 weeks from baseline following suvorexant treatment, along with a decrease in noradrenaline levels.

To investigate the effect of suvorexant on glucose metabolism, non-diabetic psychiatric patients treated with suvorexant for insomnia were enrolled in this study. Subjects consisted of 21 males and 16 females with an average age of 53.4 years old and with a mean weight of 59.3 kg. Participants received 15-20 mg/day of suvorexant. The levels of body weight, body mass index (BMI), fasting plasma glucose (FPG), triglyceride (TG), low-density lipoprotein cholesterol (LDL-C) and high-density lipoprotein cholesterol (HDL-C) in addition to noradrenaline and insulin levels were evaluated at baseline and four and eight weeks following suvorexant treatment. Glucose levels were significantly decreased at 4 and 8 weeks from baseline within physiological ranges (98.2±2.7, 89.0±3.2, 85.6±2.2 mg/dl, at baseline, 4 weeks, and 8 weeks, respectively). Noradrenaline and insulin levels were reduced at eight weeks (Fig. 1), although the body weight and BMI remained unchanged and no trend was found in the TG and LDL-C levels. The important finding of our study is that suvorexant has proved to decrease glucose levels along with a decrease in noradrenaline levels.

More than 70,000 orexin neurons are in the human brain, located in the perifornical lateral hypothalamus, which send signals throughout the brain. Orexin A and orexin B as neuropeptides promote wakefulness. Suvorexant is a potent dual orexin receptor antagonist that blocks both orexin A and orexin B, resulted in a decrease in sleep onset times and an increase in sleep duration. Moreover, animal studies indicated that administration of exogenous orexin A into the brain has been shown to increase blood glucose levels. The stimulatory effect of intracerebroventricular orexin A on endogenous glucose production was prevented by hepatic sympathetic denervation. Hypothalamic orexin plays an important role in endogenous glucose production, most likely by changing the hypothalamic output to the autonomic nervous system. Another animal experiment showed that the daily resting-phase administration of suvorexant for 2-4 weeks improved impaired glucose tolerance in diabetic db/db mice without affecting body weight gain, food intake, lipid metabolism, systemic insulin sensitivity, serum insulin, and glucagon levels. The effect of suvorexant on glucose metabolism was associated with a reduction in the expression levels of hepatic gluconeogenic factors, including phosphoenolpyruvate carboxykinase and peroxisome proliferator-activated receptor-γ coactivator-1α in the liver. However, these results are animal models, which have not been confirmed on human subjects. To our knowledge, our data is the first one that indicated the relationship between suvorexant and glucose metabolism in clinical practice. Hypothalamic orexin system may manage multiple tasks to coordinate the interconnection among the arousal and glucose homeostasis pathway (Fig. 2). 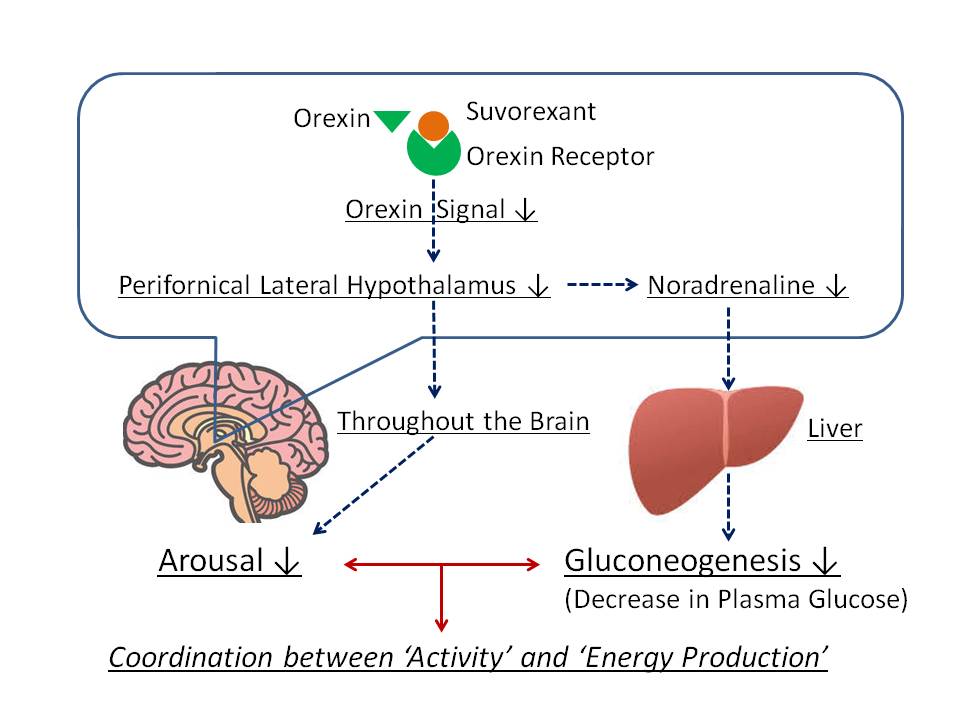 For example, coordination between the arousal and energy production through orexin receptors may be useful for hibernation, which is a seasonally adaptive strategy that allows hibernators to live through extremely cold conditions. Decreased glucose and increased beta-oxidation during hibernation indicated a shift of fuel use from carbohydrates to lipids. Orexin receptors may be important to coordinate activity and glucose production against the environment, because suvorexant, a dual orexin receptor antagonist, may work as a glucose regulatory switch independent of insulin levels.