Plants need to coordinate the biosynthetic activities present in different compartments. This is challenging especially for pathways localized within organelles, e.g. plastids, as most of the genetic information was transferred into the nucleus during the establishment of endosymbiosis, but translation occurs cytoplasmatically and the enzymes are active within plastids. Furthermore, metabolites are often hydrophobic and thus cannot simply be transported through lipophilic membranes and diffuse within soluble phases. Carotenoids are a large class of isoprenoids exhibiting various functions in plants: they serve as photosynthetic pigments, are involved in non-photochemical quenching of excess light energy, present in photosynthetic reaction centers and color flowers and fruits to attract pollinators and to support seed dispersal. Carotenoid cleavage produces abscisic acid and strigolactones, small hydrophilic plant hormones with various functions. Carotenoid biosynthesis takes place within plastids and the first enzyme of the pathway, phytoene synthase (PSY), is considered as rate-limiting. This is impressively shown by various cases in which carotenoid contents correlate with high levels of this enzyme, e.g. during tomato fruit ripening or in carrot roots. 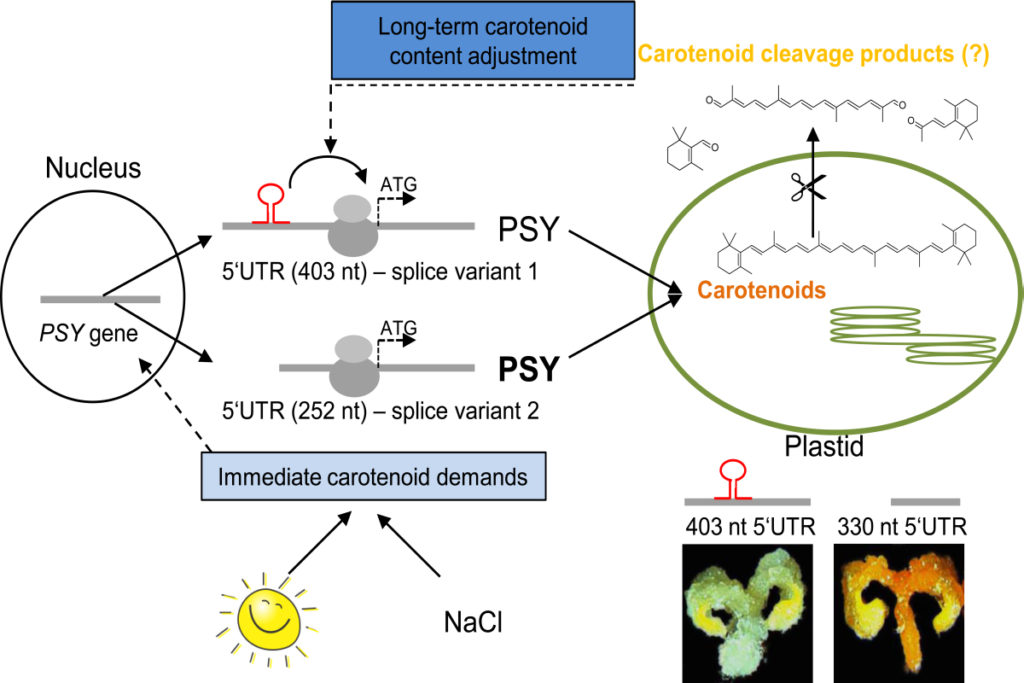 We have recently uncovered a mechanism by which the protein levels of PSY are posttranscriptionally regulated in coordination with the biosynthetic pathway flux, and thus with the carotenoid content. This regulation occurs via the 5’ untranslated region (5’UTR) of the PSY mRNA, which often contains translation-regulatory elements. Overexpression of the PSY coding region containing its full-length 5’UTR of 403 nt exhibited a translational repression and thus did not increase PSY protein levels. In contrast, overexpression including a 5’UTR version truncated by 70 nt revealed uninhibited translation similar to a complete absence of the 5’UTR. In consequence, non-green tissues like roots and callus showed large carotenoid increases only if translation was not inhibited (when the 5’UTR was truncated or absent) while no changes in carotenoid levels were observed if the full-length 5’UTR was included. In leaves, the same observations for PSY translation activity were made, although carotenoid levels did not change due to additional compensatory mechanisms acting at the level of carotenoid cleavage. Bioinformatic analysis of the 5’UTR suggested similarities to riboswitches, regulatory RNA-switches which are known from prokaryotes to posttranscriptionally regulate protein translation in coordination with specific metabolites. Although only one true riboswitch is known in plants to date, several riboswitch-regulated genes are predicted for the Arabidopsis genome. In the case at hand, carotenoid-cleavage products might travel from the plastids into the cytoplasm and exhibit negative feedback control on PSY translation, mediated by structural elements within the 5’UTR.

Interestingly, we identified a second PSY transcript variant which is generated though alternative splicing, exclusively in situations which require short-term changes in carotenoid levels, e.g. upon sudden light intensity changes in leaves or upon salt treatment of roots necessitating quick supply of abscisic acid. According to bioinformatic analysis, this second splice variant has a shorter 5’UTR devoid of a regulatory switch function and thus allows uninhibited translation causing quick pathway flux changes.

We also questioned whether this regulatory mechanism is present also in other taxa. It needs to be considered that Arabidopsis is almost unique with only one PSY gene in its genome. All other taxa carry at least two PSY gene copies in their genome. Interestingly, the 5’UTR of rice PSY1 did not exhibit translational control in the Arabidopsis system. This suggests that in taxa with several PSY genes, fine-tuning of carotenogenic flux occurs through differential expression of multiple PSY genes. A similar complexity of regulatory requirements is realized by only one PSY gene in Arabidopsis – through alternative splicing and posttranscriptional control via its 5’UTR. This might have evolved through secondary reduction of PSY gene copy numbers accompanying genome size reductions.