Tapping neurotransmitters from neurons to investigate their involvement in brain function

To tap neurotransmitters and neuromodulators from brain neurons of anaesthetised rodents, a guide cannula is stereoractically inserted. Into a distinct brain structure. Few days after surgery the stylet of the guide cannula is replaced by a double-walled push-pull cannula (see Fig. 1, A) and the brain area is superfused with an artificial cerebrospinal fluid. The superfusate contains minute concentrations of neurotransmitters which are released from their neurons in the synaptic cleft. The few fmoles of neurotransmitters released are quantitative determined using very sensitive biochemical procedures. 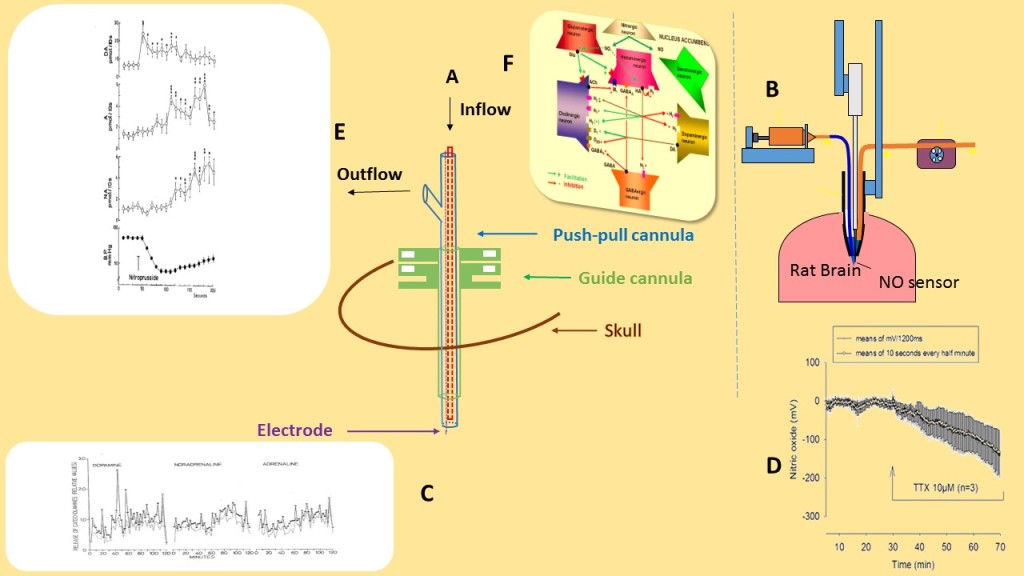 Fig. 1. A: The double-walled push-pull cannula and its guide cannula. An electrode may be inserted into the outer cannula for recordings of EEG or evoked extracellular potentials, B: The NO sensor is inserted into the outer cannula of the double-walled push-pull cannula. Shown is the complete push-pull superfusion system with peristaltic pumps for transport of the artificial cerebrospinal fluid, C: Catecholamines are released in the posterior hypothalamus according to an ultradian rhythm. Samples are collected in time periods of 10 min over 120 min, D: Superfusion of the nucleus accumbens with TTX diminishes the NO signal that is continuously recorded over 2 h, E: A fall of blood pressure elicited by sodium nitroprusside leads to a counteracting increase in the release rates of A, NO and DA in the posterior hypothalamus. Samples are collected in time periods of 10 s over 300 s, F: Presynaptic modulatory processes in the synaptic cleft of the nucleus accumbens.

1) the continuous, qualitative and quantitative determination of neurotransmitters,

2) the good time resolution that is necessary when release of transmitters is correlated to brain functions,

3) no gliosis is developed around the superfused area when the guide cannula is implanted for chronic experiments in conscious animals. Hence, the ratio transmitter/metabolites is not changed. Finally,

4) the unique characteristic of the push-pull superfusion technique is that microelectrodes and biosensors may be inserted into the push-pull cannula for recordings of extracellular potentials or EEG and on-line determination of nitric oxide (NO) (Fig. 1, B), respectively. Thus, signals are recorded in the microscopically exactly same area in which the transmitter release is determined.

Determination of the release of the catecholamines noradrenaline (NA), adrenaline (A) and dopamine (DA) in the nucleus of the solitary tract revealed that the release rates of all three catecholamines are not constant over time but they oscillate according to an ultradian rhythm with a frequency of about 1 cycle per hour (Fig. 1, C). Similar oscillations have been observed in the release rates of several neurotransmitters as GABA, histamine, serotonin in various brain regions. Moreover, the signal of endogenous NO released in the nucleus accumbens also varies phasically. In this connection it is important to mention that NO released in the nucleus accumbens originates from neuronal sites. Indeed, the release of endogenous NO is diminished on superfusion with tetrodotoxin (TTX) which inhibits the propagation of action potentials (Fig. 1, D).

To investigate whether a certain neurotransmitter is involved in a particular brain function, experimentally evoked changes of the brain function are carried out and the transmitter release is determined that reflects neuronal activity. For example, an experimentally induced fall of the arterial blood pressure evoked by intravenous injection of sodium nitroprusside leads to a counteracting increased release of all three catecholamines in the posterior hypothalamus pointing to the pressor function of the amines in this brain region (Fig. 1, E). Similar experiments have shown that catecholamines, GABA, serotonin, histamine, NO, are involved in brain blood pressure control.

Mutual modulations of transmitter release in the synaptic cleft exist. A transmitter, for example histamine, is released from its neuron in the synaptic cleft and via auto- and heteroreceptors either enhances or inhibits the activity of its own neuron and of neighboring neurons. This micro system is influenced by NO which is liberated from nitrergic neurons and either directly or indirectly via glutamatergic neurons modulates the transmitter release in the synapse (Fig. 1, F).

Taken together, the findings underline the importance of NO as a universal modulator of brain function.