The gestural origins of language

How language evolved is one of the big mysteries of science. Other species communicate, but none can create anything like the variety and complexity of human language. There seems no limit to the number of things we can say by stringing words together. In contrast, but the vocal calls of other animals and birds are relatively fixed and stereotyped. Human loquaciousness seems little short of the miraculous, even defying Darwinian evolution 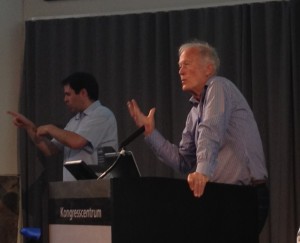 But what if language originated in manual gestures rather than vocal calls? After all, the sign languages created by deaf communities lose nothing in precision or complexity compared to speech, and we all tend to gesture as we speak anyway. Especially the Italians. Moreover, compared to the voice, the hands provide a much more natural way to describe physical activities in the world.

Our closest nonhuman relatives, the great apes, provide further clues. Trying to teach them to speak hasn’t come close to working, but some, such as the famous bonobo Kanzi, have acquired simplified forms of sign language, or the ability to communicate by pointing to symbols on a specially design keyboard. Studies of chimps in the wild also show their gestures to be much more variable, purposeful, and indeed language-like than their vocalizations.

Still, we can’t sit down with an ape and have a decent conversation even through gestures, but it’s been at least 6 million years since we shared a common ancestor. That’s a lot of time for our paths to have diverged. Our hominin ancestors began to walk upright, freeing their hands for activities other than simply getting around. Their brains tripled in size. And as they retreated from forested environments onto the savanna they established larger social groupings, and the need for more effective communication.

Perhaps gestures started out like those we see in modern ape but expanded into pantomime, so our hunter-gatherer forebears could relay information about their forays, or about future plans. Over time pantomime would become stylized and streamlined, losing much of its pictorial quality, and moving closer to language as we know it. We see this progression in sign languages as they emerge in deaf communities.

Gestural theory was boosted when mirror neurons were discovered in the monkey, so-named because they are active both when the animal grasps something and when it watches another individual doing the same. They provide a natural platform for the later development of a communication system linking understanding with production—or ultimately, listener with speaker. Tellingly, they are located in the monkey in brain areas corresponding closely to the language areas in the human brain.

But how and why did speech come to dominate? Well, the transition from hand to mouth is in some ways a natural one—consider eating, for example! Some of the monkey’s mirror neurons respond to grasping with the mouth rather than the hand. Sign languages include movements of the face and mouth, as well as the hands. Gesturing may have progressed to encompass facial gestures, and then gradually retreated to the mouth. Adding voice would then have served to make mouth gestures, largely internal and hidden from view, accessible through sound rather than vision.

The shift to voiced language was perhaps an endpoint in the process of streamlining, cutting down on energy costs and further freeing the hands for other activities, such as making and using tools. Confining language to the mouth is an early example of miniaturization. It also allows communication at night, or when obstacles intervene.

Through texting and twittering, though, the hands may again be taking over.