Social insect colonies are famous for swarm intelligence and collective decision making – being able to come to a unified decision in groups of thousands. An ant colony, for example, can decide which of several food sources to forage in, or which of several routes to take to a food source. Amazingly, ant colonies can reliably choose the best of several food sources, in spite of the fact that no one ant may have compared both food sources. Moreover, they can make these decisions without a leader. Such ‘decentralised decision making’ has been the inspiration for many techniques used by humans to route traffic in cities, or data in information networks. 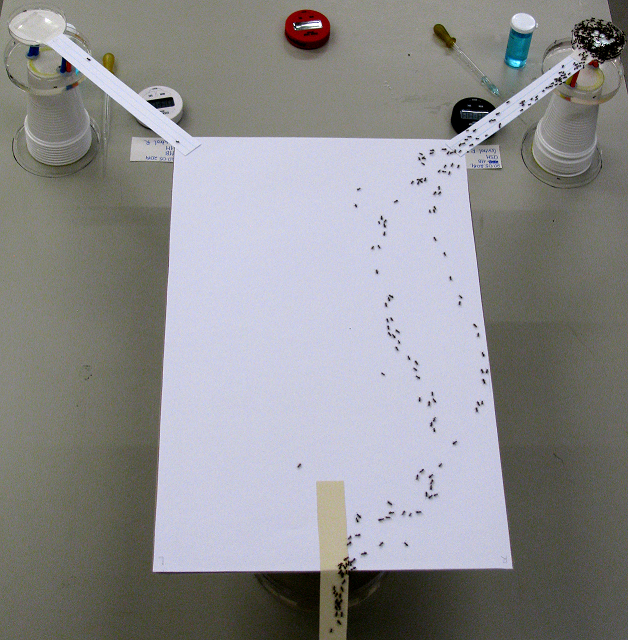 A well-established trail of ants exploiting a poor-quality feeder (right). The high quality feeder has not been introduced yet, and the chemical trail is still in place, as can be seen by the tightly followed path of the ants.

The traditional explanation for how ants do this is positive feedback using trail pheromones: when an ant finds a food source, she runs back to the nest to tell the other ants, laying a chemical trail on the ground. The other ants can follow this trail to the food source. These ants also feed and return  depositing chemical, so the trail gets stronger very quickly. The more chemical on the trail, the more likely ants are to follow it. Ants deposit more chemical to better food sources. So if two food sources of different qualities are found at the same time, the better one will get a stronger trail, and positive feedback (more chemical > more ants > more chemical > etc.) results in a quick and appropriate decision to only use the better food source.

But there is another possibility. Many ants have a good memory, and can remember where they found food. If they have a memory of a food source, they often ignore pheromone trails. So, maybe if the ants find a poor food source first, they all learn where it is. Then, if a new food source shows up, the ants with the memory ignore any chemical trails leading to it, and keep focussing on what they know. In our experiment, we tested if this could be the case.

The insights from our experiment tell us that we need to rethink how social insects make collective decisions, and remind us not to forget that ants are also individuals. More broadly, lessons from collective ant behaviour may help us design better ways of solving difficult problems, like routing traffic, organising supply chains, and managing data networks.