In this study we constructed the mental health profiles for the main occupational groups in the Finnish working age population, separately for men and women. Antidepressant use, long-term sickness absence due to depression, and suicides were used to define these profiles. The highest risks of the three mental health outcomes were also examined by occupational group. 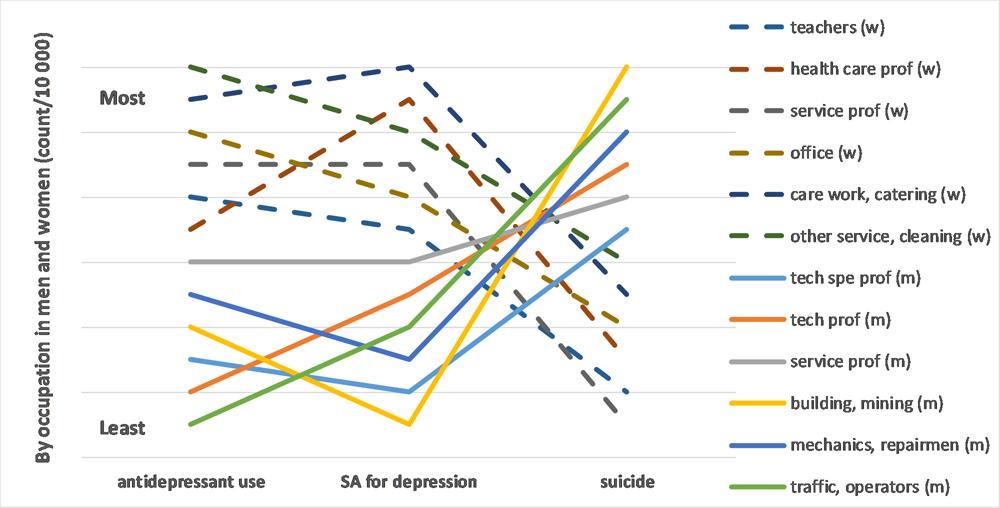 Between occupational groups among men, the risk of antidepressant use was the lowest in low-skilled workers in building and mining professions, mechanics and repairmen, and traffic operators when compared to high-skilled technical special professionals. However, the risk of suicide was 2 times higher in the low-skilled groups when compared to high-skilled professionals. Above mentioned characteristics of masculinitymay be more common among the low vs. high-skilled occupations, and contribute to this finding for men. Avoidance of health care has been suggested to be a form of social action through which men from lower socioeconomic groups maintain their status. Among women, the risks of antidepressant use and sickness absence due to depression were somewhat higher in the low-skilled occupational groups (e.g. care workers/caterers) when compared to high-skilled teachers. No clear pattern for suicide risk was observed, possibly partly due to low numbers of suicides among women in these data.

Overall, these findings suggest that occupational status and gender together are underlying factors explaining distinctive mental health profiles in the working population. The higher suicide rates among men than women also suggest that in terms of mental health service use men are not able to obtain timely treatment. In addition, within the male population in particular, there seem to be different behavioural patterns related to mental health among those in the lower vs. high-skilled occupations.