The definition of remnant lipoproteins (RLP) in plasma has been confused for many years because of the variety of methods used to identify RLP. The most common definition of RLP proposed several decades ago has been the intermediate density lipoproteins (IDL) isolated by an ultracentrifugation method as other lipoprotein fractions. The most important RLP characteristic has been recognized as the TG-rich lipoproteins which increase significantly after food intake. However, IDL doesn’t increase after food intake, it has become inconspicuous as indicative RLP. There are other methods, such as electrophoresis, NMR and HPLC which are used to identify RLP by charge, particle size and the calculation. However, those methods can’t isolate a substantial RLP fraction from plasma. 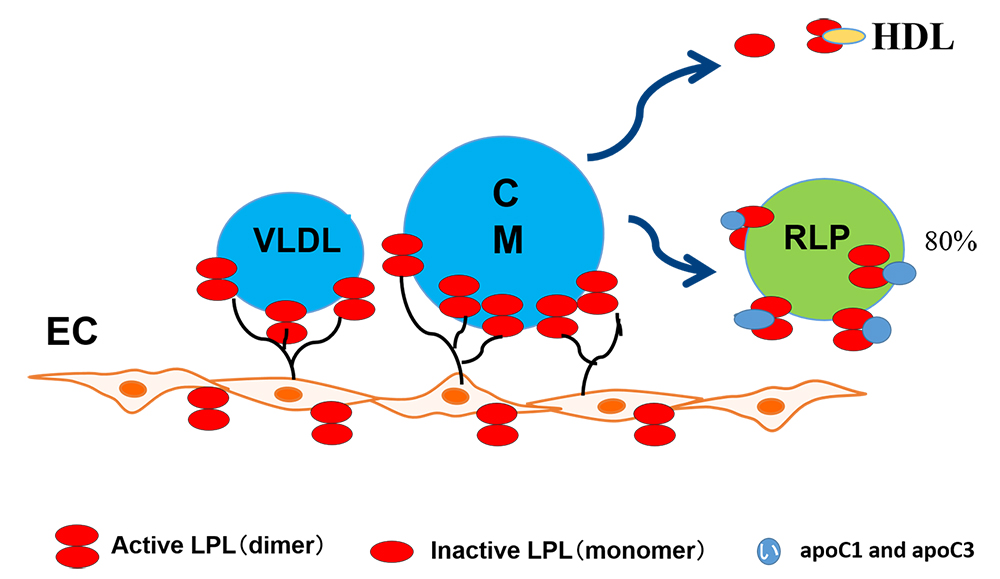 Fig. 1. RLP are formed from chylomicrons (CM) and very low density lipoproteins (VLDL）on the surface of endothelium cells (EC). After hydrolysis of CM and VLDL, most LPL is dissociated from EC as the LPL- RLP complex with dimeric and inactive form.

After the reduction in the TG content by LPL, CM and VLDL particles have been generally believed to become smaller remnant particles such as IDL. However, several studies, including our own reported that RLP was predominantly of large VLDL size, which remained without further hydrolysis associated with comparatively low LPL activity and concentration at endothelium. We have shown that LPL does not increase after food intake associated with significant increase of RLP size and resulted less amount of LPL per postprandial RLP.

Chylomicronemia is a typical case which lacks the LPL protein or lipolytic activity. Those cases can’t form remnant lipoproteins, therefore, large nascent chylomicrons and VLDL remain in plasma. As those particles don’t carry LPL, those lipoproteins can’t be defined as remnant lipoproteins. The cases with TG above 800 mg/dL have been controversial, whether atherogenic or non-atherogenic, it can be judged by the concentration of LPL on those TG-rich lipoproteins.

When LPL is detached from the endothelium, LPL is released as the RLP-LPL complex with inactive form into the circulation. The LPL bound to RLP plays a role for the ligand to LRP-1 or VLDL receptor, as Beizegel et al reported that LPL is able to efficiently mediate binding of lipoproteins to the cell surface and to both of the endocytotic receptors.

In conclusion, the present report clarified that the majority of LPL in non-heparin plasma was bound to RLP particles in the dimeric but inactive form.